American Airlines Q3 earnings: where next for AAL stock?

American Airlines has already raised its third-quarter guidance, saying that it expects to post Q3 revenue of $13.46 billion, up 47.90% year on year (YOY), and up 13% from pre-pandemic levels in 2019.

Net income is expected to be about $454 million. This means it’s expected we’ll see American Airlines’ second post-pandemic profit per share, which estimates have in at anywhere between 62 cents and 42 cents.

Concerns over the looming recession, fuel prices and staff shortages have clouded what would otherwise have been the US airline industry’s best earnings season in three years. Across the board, we’ve seen an increase in international flights for both leisure and business travellers that are expected to boost revenue.

But the company’s profit and margins were still disappointing, as American Airlines’ total costs – including fuel – are expected to be up over 57%.

Plus, the airline’s capacity is still well below pre-pandemic levels. It’s already said that its flight schedule had been cut by nearly 10% over the period and its Total Available Seat Miles are expected to be down 9.6% in Q3 compared to Q3 2019 – although that’s up 3.6% from Q2 2022.

American Airlines has fought harder than most to rebound from Covid, with the added trouble of its antitrust lawsuit from the US government and now plane shortages caused by delays in the deliveries of Boeing 737s. And now Hurricane Ian is also likely to weigh on AAL’s earnings, as more than 1900 flights out of the East Coast were cancelled in a single day. Delta – the first of the US airline to report – said last week that the mass flight cancellation impacted earnings by 3 cents per share, so we could see something similar with AAL.

Where next for American Airlines stock?

We should see the low of $11.80 hold as a firm floor going forward, with investors hoping that the March 2022-low of $12.50 can act as an intermediary level of support going forward. If these both fail, then the stock risks slipping back toward fresh two-year lows and back under the $11 threshold. 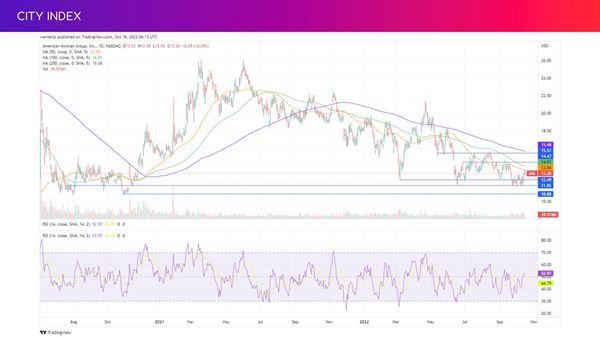 Turning to the weekly chart, we can see American Airlines has continued to set a series of lower-highs in a trend that can be traced back to April 2018, with the line holding as a firm ceiling since June 2021. If this stays intact, then it suggests American Airlines could struggle to break much further above the 50-day SMA. 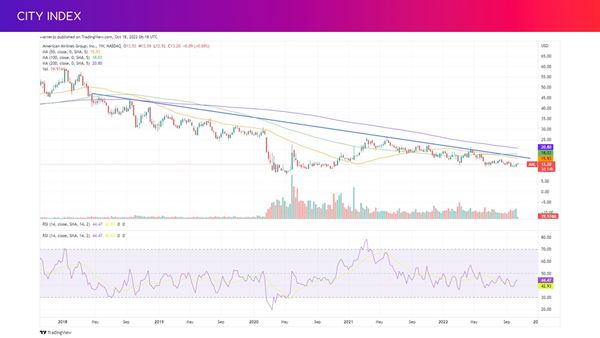