When the Bank of Mexico (Banxico) last met on May 12th, it hiked interest rates by 50bps from 6.5% to 7% and delivered a hawkish statement. The Committee was still extremely concerned about inflation risks, although it had already raised rates at the 8 previous meetings.  Inflation had risen to its highest levels since January 2001, and revised forecasts higher once again for headline and core inflation for the second and third quarter of 2023. (Mexico reports CPI for May on Thursday). As a result, the Peso has continued to climb, and USD/MXN is trading near its lowest levels since March 2020. 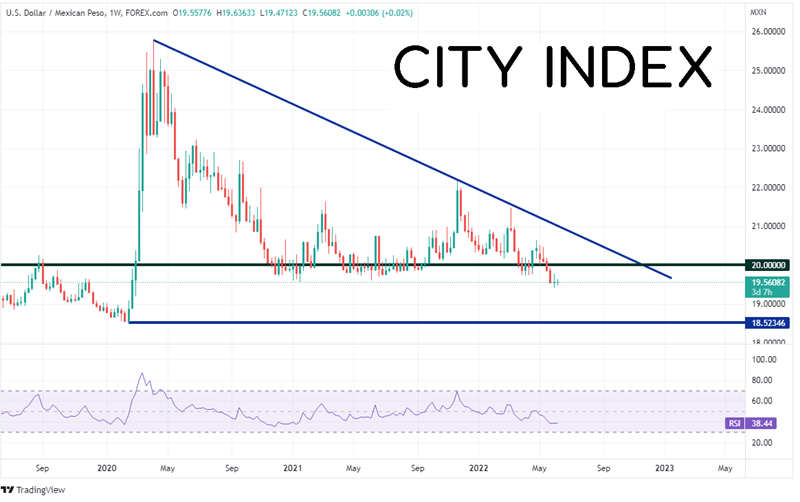 On the weekly timeframe, USD/MXN made a high during the week of April 6th, 2020, just after the coronavirus pandemic set in.  Since then, the pair has been making lower highs, while forming a descending triangle, with the base oscillating near the 20.00 level.

On the daily timeframe, the lower bound of the range at the base of the descending triangle the pair has been in is near 19.5491, which has been tested many times since early in 2021. Last week, price finally broke through that level and has formed a flag formation.  The target for the flag formation is near 18.75. Also notice in the bottom panel of the chart above that USD/MXN and WTI Crude Oil have a strong negative correlation, with a correlation coefficient of -0.87.  Readings below -0.80 are considered strong and indicate that the 2 assets move in opposite direction most of the time. Therefore, if Crude Oil continues to move higher, USD/MXN should continue to move lower.

On a 240-minute timeframe, USD/MXN is forming a symmetrical triangle.  The expectation from a symmetrical triangle is that price will break out in the same direction as the prior move, which is lower.  First support is at the bottom trendline of the triangle at 19.4712 and then the lows of May 30th near 19.4136.  Below there, USD/MXN can fall all the way to the lows of February 2020 at 18.5234 (see weekly), just below the target of the flag pattern on the daily timeframe.  However, if support holds, first resistance is at the highs from June 1st at 19.7670.  Above there, price can move to the 38.2% Fibonacci retracement level from the highs of April 28th to the May 30th lows at 19.8813.  The next resistance is the 50 Day Moving Average at 19.9976 (see daily). 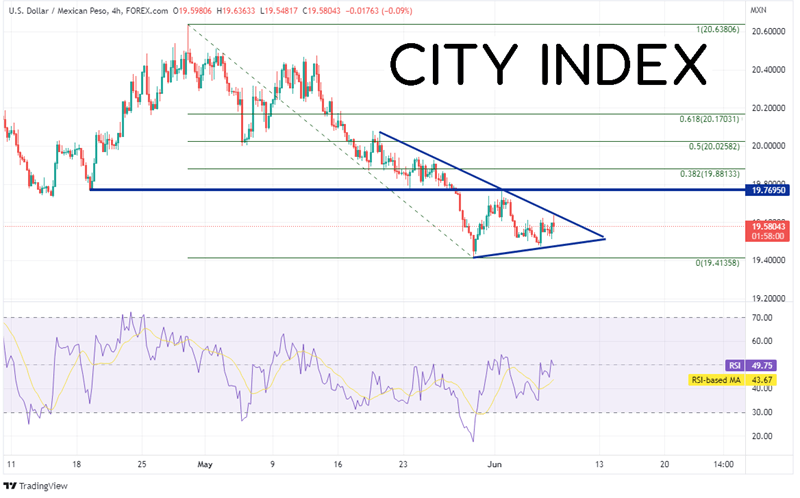 Both a hawkish Bank of Mexico and the rise in Crude Oil prices have been pushing USD/MXN lower.  The pair has recently broken trough the bottom of the base of a descending triangle and formed a flag pattern, which targets near 18.75.  Will it get there? It may depend on the next direction of Crude Oil.