OPEC+ hiking output as planned, but it may not be for long: WTI, USD/NOK

OPEC+ decided to stick to the plan and increase oil supply by 400,000 bpd, despite concerns about the Omicron variant of the coronavirus and an announced release of strategic reserves by some countries.  With little still known about the variant, OPEC+ decided to roll the dice and see what happens.  The script was always to release 400,000 bpd, but with uncertainty as to how the virus will affect demand, traders were skeptical OPEC+ would oblige.  In addition, the coordinated release of oil reserves from the UK, US, Japan, South Korea, and India left a sour taste in the mouths of OPEC+ officials as they contemplated what to do regarding an increase in supply.  Oh, and I forgot to mention that the price of oil had dropped over 20% in November! 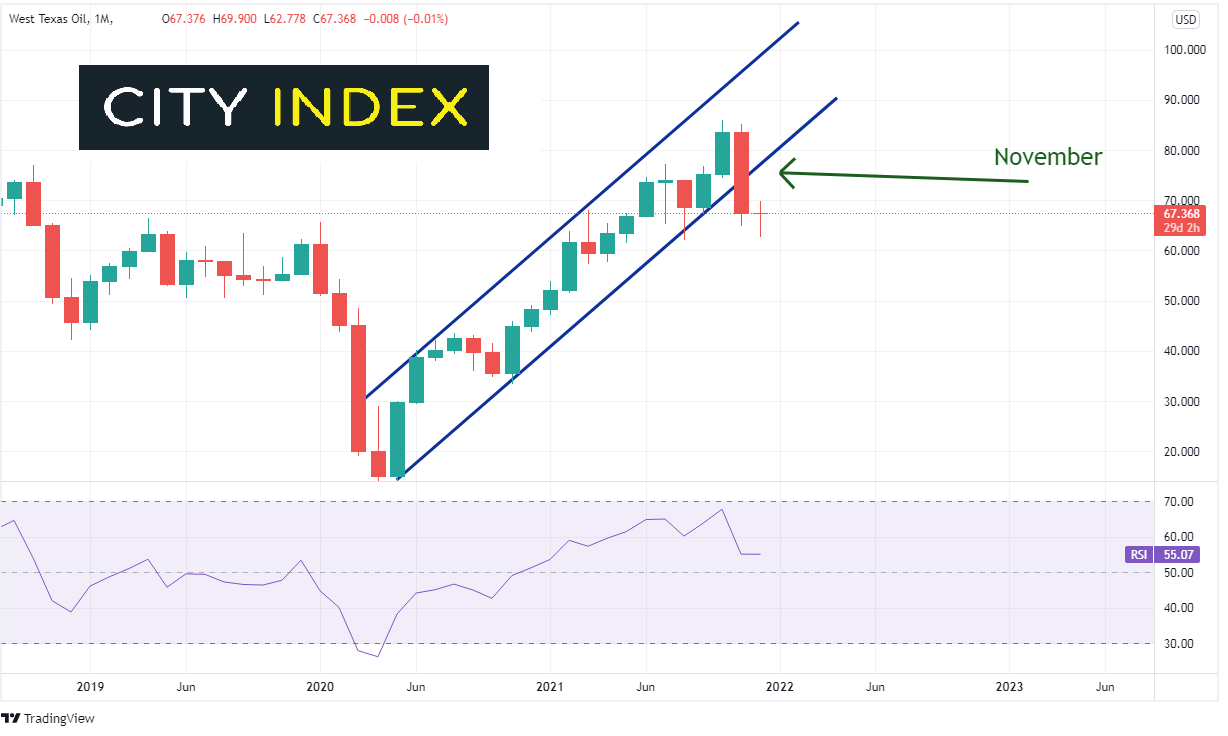 Despite the increase, OPEC+ left themselves a relief valve:  An open ending to the meeting!  They notified the markets that they reserve the right to cut production at any time.  So, member nations are on standby, ready to takeback the increase if needed!

WTI Crude Oil had been moving higher in an orderly channel since August 23rd from a price of 62.01 up to the October 25th highs at 85.90.  Price broke lower below the channel on November 3rd as the FOMC announced tapering on bond purchases.  It then bounced into the bottom trendline near 85.15.  However, price could not take hold above the trendline when the US CPI data was released on November 10th.  Price retraced nearly 100% of the August 23rd to October 25th move, including a 12.64% move lower on November 26th, as the Omicron variant of the coronavirus was announced.  Price formed a hammer candlestick on the daily timeframe, a sign of a bullish reversal. 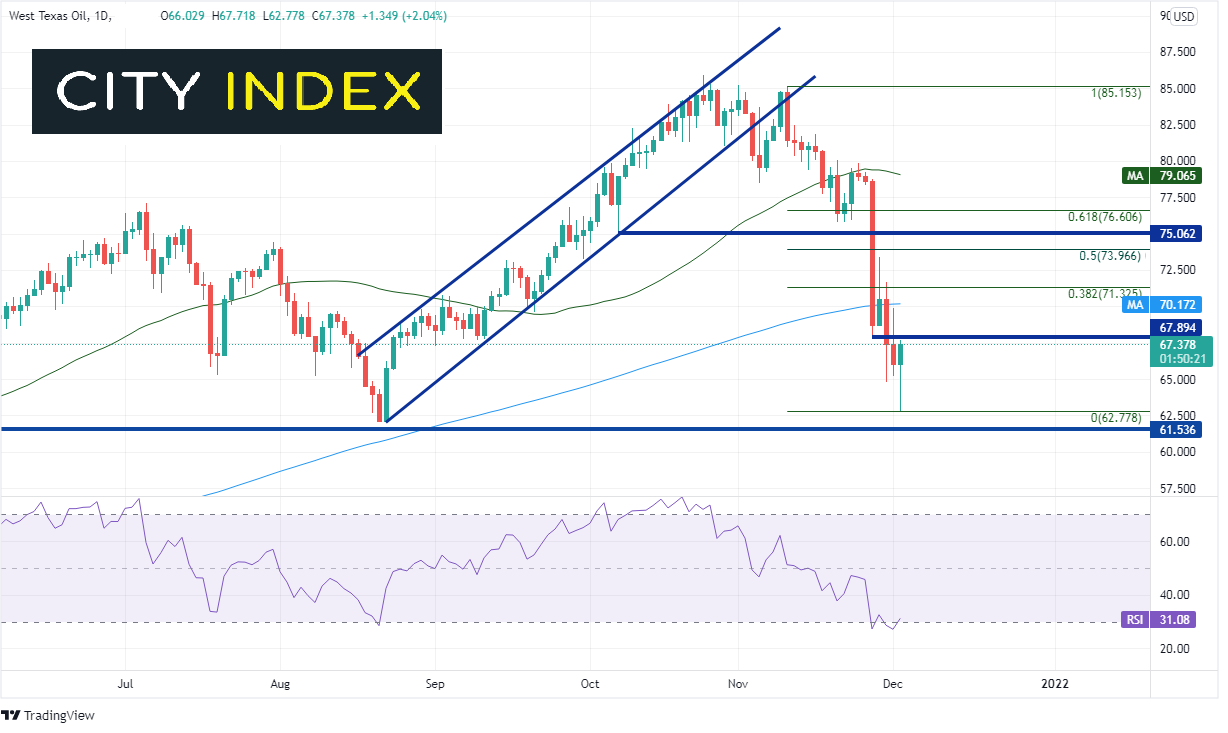 Interestingly, USD/NOK did not pullback as Crude Oil rallied.  Crude oil and USD/NOK have a strong negative correlation.  As crude oil moves lower, USD/NOK moves higher.  The current correlation coefficient for the 2 assets is -0.87. Does USD/NOK know something Crude traders don’t, even with the overbought RSI? Tuesday’s high is 9.1292.  If price moves above there, it can quickly move to the 127.2% Fibonacci extension from the August 20th highs to the October 21st lows at 9.3278.   The 161.8% Fibonacci extension and horizontal resistance is at 9.60/9.61.  If USD/NOK moves to these levels, it would mean WTI is probably moving lower.  However, if near-term resistance holds, horizontal support is at 8.7076 and then the 50- and 200-Day Moving Averages at 8.6228 and 8.5704, respectively.  If price moves towards these levels, WTI is probably moving higher. 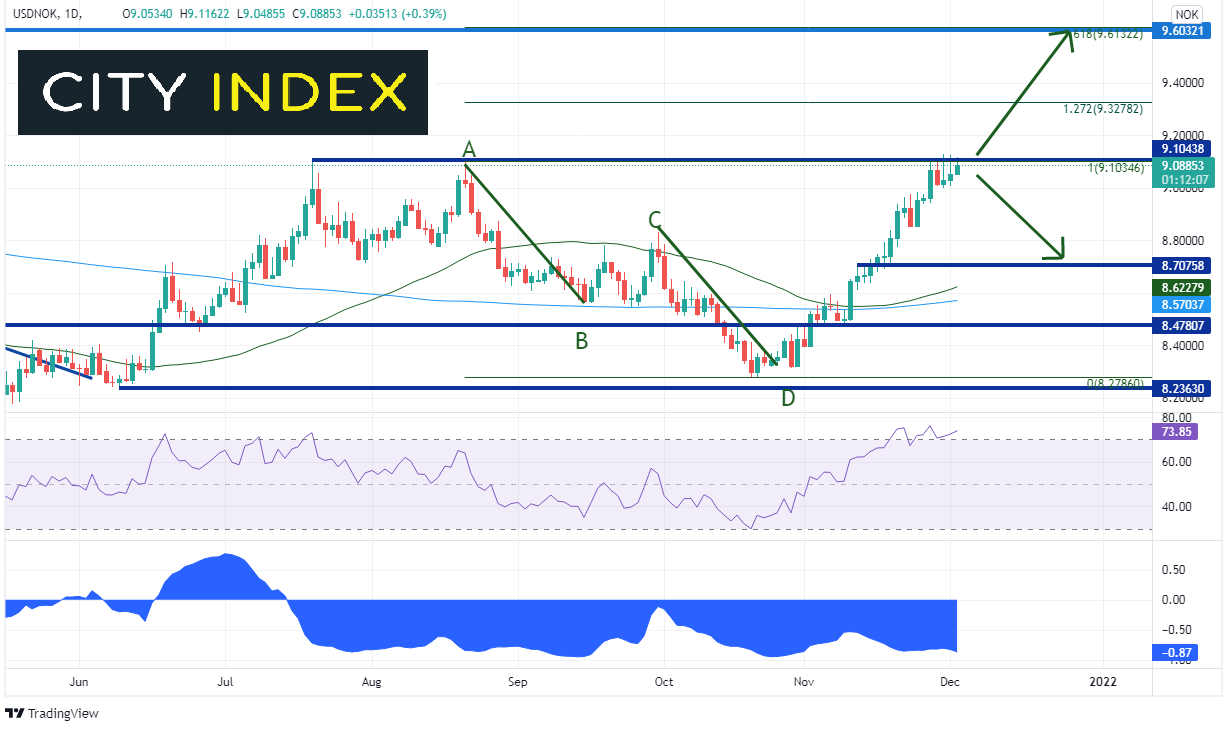 Despite the OPEC+ decision today to increase output by 400,00 bpd, WTI Crude Oil ended the day higher.  The “escape clause” in the statement gave them a way too take back the increase in supply.  In addition, the RSI was in oversold territory.  However, if the Omicron variant turns out to be worse than currently expected, WTI could be back at Thursday’s lows very soon!