By :
Fawad Razaqzada
,  Market Analyst
The pressure continues to mount on Turkish lira. President Tayyip Erdoğan has once again vowed to continue slashing interest rates despite annual inflation running at more than 70% amid soaring energy and food prices. With the Fed – and soon the ECB – hiking interest rates, this is further exacerbating the problem. Higher yields with much lower risk of default for those currencies means investors are happy to pile into the dollars and euros instead of lower-yielding currencies like the Japanese yen and much-higher-risk currencies like the Turkish lira. The result is that at 17.15, the USD/TRY is just shy of the intraday record of around 18.41 hit on 20th December. But it has now climbed above the record closing level that was hit that day. Is the USD/TRY heading for 20.00 next? 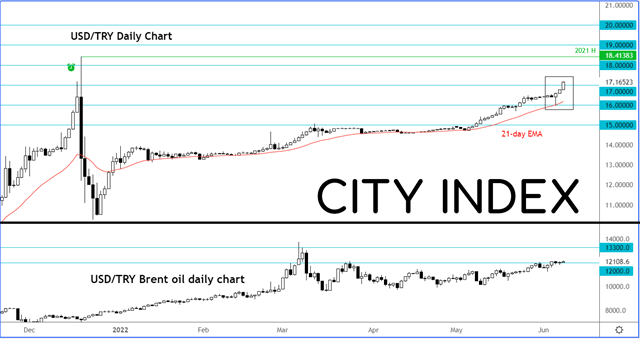 This morning saw the USD/TRY jump another 2.3% to above 17.15, extending its weekly gain to 4.5%. This was the third day of consecutive gains for this pair, as the lira sold off across the board. On Monday, Erdogan said Turkey will continue to cut interest rates further instead of hiking them in the face of high living costs. "This government will not increase interest rates. On the contrary we will continue lowering the rates," he added. He is urging people to take advantage of low-rate loans and invest in the economy, instead of holding dollars and euros.
Investors are also concerned that rising oil prices will just add to Turkey’s inflation misery. Brent oil climbed above $121.50 on concerns over tight supplies. Demand concerns have eased with China gradually re-opening its economy after spikes in Covid cases earlier in the year. What’s more, we are heading towards peak driving season in the US, which should mean higher demand for gasoline. The fact that oil prices have refused to go lower despite China’s lockdowns, economic slowdown in many parts of the world, OPEC ramping up output, and the big releases of strategic petroleum reserves in the US, China and elsewhere is remarkable. Rising oil prices are especially bad for consumer nations like Turkey, India, Japan and South Korea.

You can trade with City Index by following these four easy steps:
Open an account, or log in if you’re already a customer
Search for the market you want to trade in our award-winning platform
Choose your position and size, and your stop and limit levels
Place the trade
Related tags: Trade Ideas TRY USD/TRY Forex Brent Crude Oil