Overnight implied volatility has risen sharply higher for yen pairs ahead of tomorrow’s Bank of Japan (BOJ) meeting. In fact, they now sit at their highest level since Brexit, which saw some yen pairs produce double-digit percentages moves (to the favour of the yen) following the infamous vote.

Why are traders on edge ahead of tomorrow’s BOJ meeting?

The BOJ surprised market in January by doubling their target band of the 10-year JGB from +/- 0.25% to +/- 0.5% ‘around’ zero. Given they had denied for months they would exactly that, it quickly led to speculation that the BOJ are now veering away from ultra-loose monetary policy, and this was just an important first step. But things are never straight forward with the BOJ as there are several moving parts for their policy, so we’ll take a look at some potential scenarios.

There is a growing expectation for the BOJ to either widen the band (to 0.75% or 1%) or scrap it all together. On one hand this is plausible as Kuroda finishes his 10-year term in April, and he may want to provide a smooth transition to his successor.

But the BOJ have already proven they don’t need a meeting to announce such a move, as we saw on the 3rd of January. And do they need to widen it so aggressively twice in the same month?

Personally I suspect the BOJ are unlikely to widen their YCC further, given the increased levels of volatility it has caused for Japan’s bond markets over the past few weeks. Furthermore, this seems to have quickly become a consensus view – and the BOJ don’t have a great record of playing along with the consensus. And this leaves the yen to a broad sell-off (stronger USD/JPY) if they keep YCC in place.

Could the BOJ raise interest rates?

But as the year progresses there’s a much greater chance that the BOJ will revert to ZIRP (zero interest rate policy), and if inflation remains elevated they could even raise rates to 0.1% or 0.2% further down the track.

Assuming the BOJ intend to scrap YCC before Kuroda exits (but it is not announced tomorrow), a potential first step would be to limit the amount of JGB purchases in the January meeting before wrapping it up at their March meeting.

The BOJ could switch to an inflation target ‘range’

Not many are discussing this that scenario, which is partly why I like it. I don’t think the BOJ will scrap their inflation target all together, but they might announce a target range of 2-3%. We know that the PM has been calling for more flexibility with the inflation target, and this seems like a plausible compromise from the BOJ. Yet this is a scenario to plan for as it gives the BOJ greater wriggle room with their policy – so may provoke a less directional response from markets. It is worth noting that implied volatility is not a precise target and essentially tells us options traders estimate with ~68 probability of prices closing within the implied range. Furthermore, I have noticed a tendency for markets not to reach the suggested upper or lower bounds of the range when IV explodes like it has today. This could be because markets are now fully prepared for a large event and much of the shock factor has been priced in. Implied volatility was low ahead of the BOJ’s surprise announcement on the 4th of Jan, but much higher after the event (and the same can be said for Brexit).

With that said, it is likely to be a volatile event regardless even if not as volatile as the IV’s currently suggest. Either way, risk must be managed accordingly – even if it means not trading the actual event. 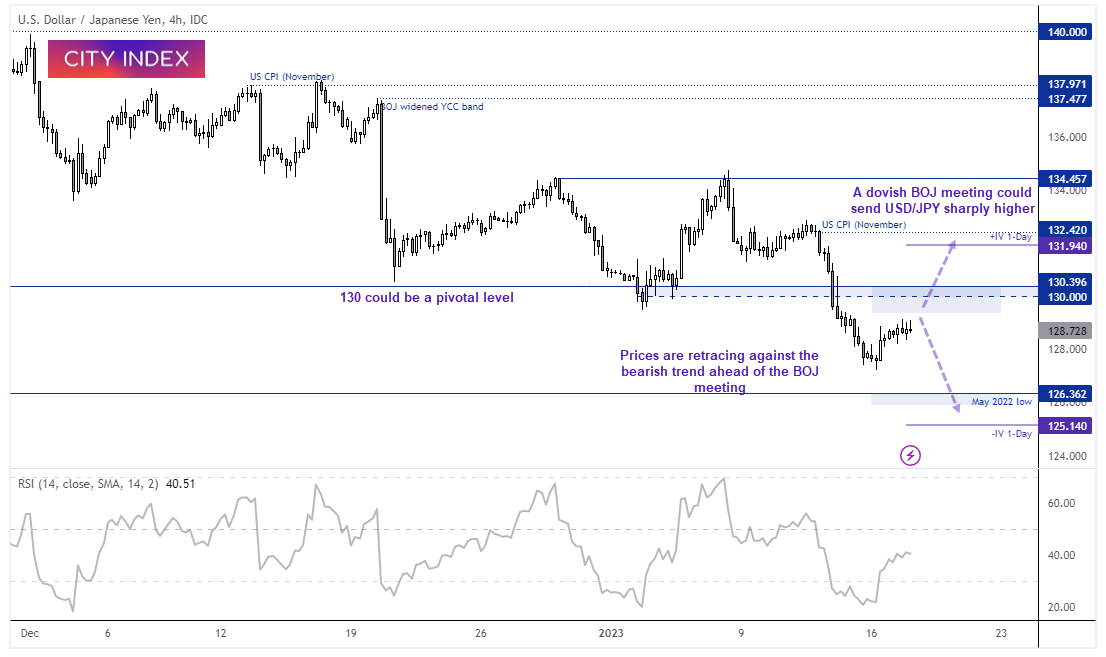 Prices have retraced against the bearish trend on the 4-hour chart. If prices continue to drift higher I doubt it will have the legs to reach the 130 resistance zone ahead of the meeting, but we may see further bearish interest as we get close to the meeting with expectations for a hawkish meeting remaining high.