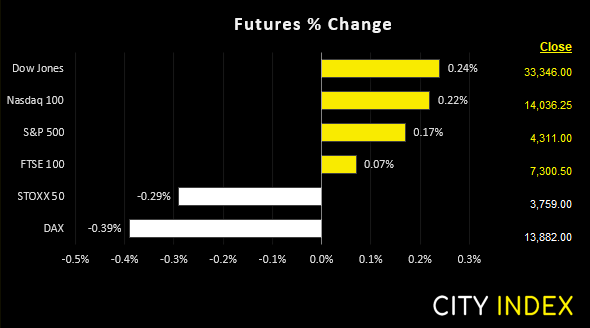 Asian equity markets mostly tracked Wall Street lower, although the ASX was the exception having recouped earlier losses following stronger-then-expected GDP in Q4. But we’re not seeing the negative vibes in Asia mirrored in US futures which remain in tight ranges and effectively flat.

The latest on the Ukraine crisis

Reports continued to show heavy shelling of Ukraine cities and rural areas, with claims that bombing is ‘indiscriminate’. Russian Paratroopers have also landed in Ukraine’s second largest city and in combat with Ukraine’s soldiers (and volunteers) on the ground.

The March contract for ruble futures closed at 0.0088 – which means it now takes 113.63 rubles to purchase a single US dollar. The ruble has fallen around 40% since November, back when satellite images first revealed Russian troops were building up along the border of Ukraine. Although a large chunk of that depreciation came on Monday once the severity of Western sanctions on Russia became apparent.

Since the shock and awe of Monday’s ruble crash prices have shown signs of stability. Clearly, there seems little reason to bid the currency with Western companies severing ties Russia. But at the same time, we question how much more downside there could be for the ruble. Rates have been hiked to an eye-watering level of 20%, companies have been ordered to dump their foreign reserves and the West have already dealt the heavy blow of removing key banks from SWIFT. And with Biden now targeting oligarchs and their private yachts, it is difficult to see how we’ll see another significant depreciation of the ruble with the element of surprise now behind us.

Crude rises to an 8-year high 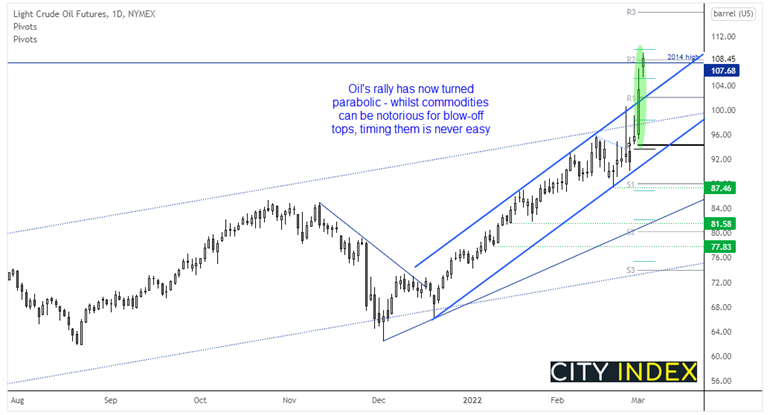 The rise in oil prices has now reached a parabolic stage. This could be the beginning of a blow off top – where bulls eventually ruin out of traders to buy from before printing a sharp reversal. Or this could simply be the early days of a stronger move. Timing such tops on commodities is not an easy feat, but over the near-term how prices react around the 2014 high is likely key for its next directional move.

BOC up next, EUR/CAD in the crossfire

Elsewhere in currencies AUD and NZD were the strongest majors, with GDP helping the Aussie take the top spot. Whilst CHF and JPY are the weakest, volatility levels stop short of labelling it a ‘risk-on’ session overnight.

The Bank of Canada (BOC) announce their monetary policy decision at 15:00 GMT, and is the main economic event (unless OPEC surprise us with a faster increase of production than the +400 bpd increase).

Whilst the Bank of Canada surprised traders by not raising rates in January, all economists polled by Reuters points towards a 25-bps hike today and take the base rate to 50 bps. Calls for a 50 bps hike seem long forgotten, although we should see rates at 0.75% if the 3-month OIS is correct. 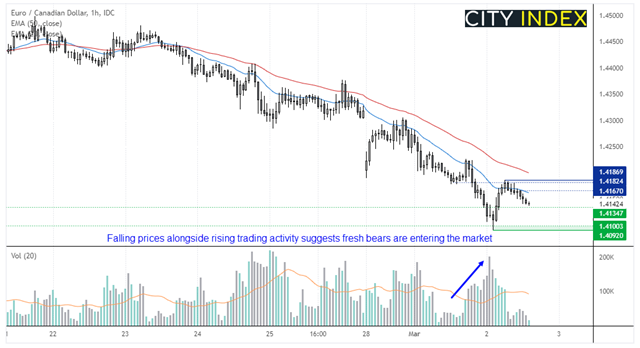 Given Europe’s proximity to Russia, a (potentially hawkish) hike from BOC in the pipeline and rising oil prices, EUR/CAD could remain of interest to bears. Its hourly trend remains bearish and prices fell yesterday on rising trading activity, which suggests initiative selling. We see the potential for it to continue south and retest 1.4000. Although threats to this bias include positive headlines from the Ukraine crisis (which seems unlikely at present), lower oil prices or a surprise hold from BOC. 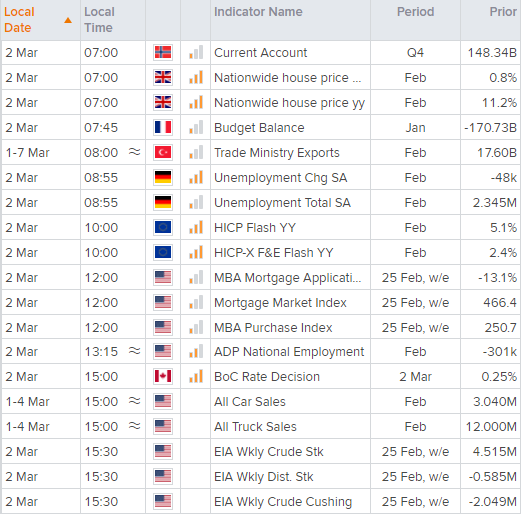