Alibaba falls towards key support ahead of earnings

China’s equity markets remained under selling pressure today. Partly due to the negative global sentient surrounding Russia’s invasion of Ukraine, but also concerns that Beijing will continue to clamp down on property and technology companies. Earlier today, China’s state-media commented on “excessively fast property growth” and that excessive monetary policy easing needs to be guarded to not push up real estate prices too fast. These comments come after the PBOC (People’s Bank of China) cut their 1-year prime loan rates at the over the past two months and the 5-year LPR once. The CSI 300 is down around -3% during although the Hang Seng is down just -0.2%.

The Hang Seng gapped lower yesterday to break trend below 24,000 and trend support. The selloff has found stability around the January 31st low, and currently trades in a tight range ahead of tomorrow’s earnings report from Alibaba. A break above yesterday’s high likely prompts a run to 24k as it closes the gap, but whilst prices remain below 24k then the odds favour an eventual break beneath 24,470 and move towards the September low. 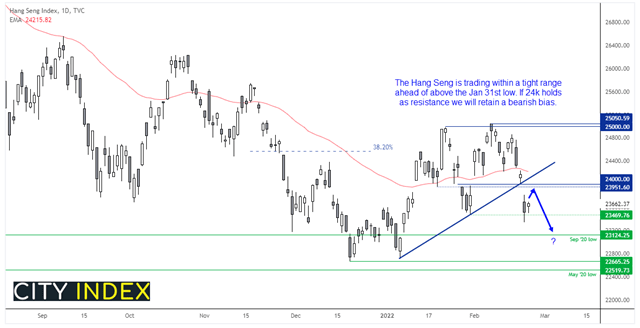 Shorting Alibaba is not a new idea. It’s been within a strong downtrend for over 16 months and has shed nearly -70% over that period. Yet it remains on a buy recommendation with average estimates for it to rise nearly 40% over the next 12-months. According to Reuters, Alibaba remains an overall buy rating with 13 analysts opting for a “strong buy”, 9 with a “buy” and six with a ‘hold”. None of the analysts in the survey currently have a sell recommendation.

Let’s hope they are right for the analysts’ sakes as the company has missed two of its last three earnings estimates, with Septembers figures falling -11.9% below forecasts. But we suspect that the level of success or failure tomorrow’s earnings report reveals will directly impact which way momentum turns from its key support zone around $10.

This image will only appear on cityindex websites! 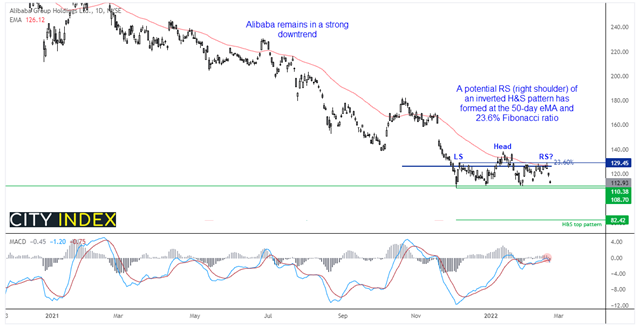 After hitting a 4.5 year low in December, it has retraced against that trend yet momentum is pointing lower once more. The MACD has generated a sell-signal and prices are close to a key support zone, a break beneath which confirms an inverted head and shoulders top pattern. If successful, the pattern projects a target around 84.42.

A break below 108.70 assumes bearish trend continuation. Depending on time horizons, bearish traders could consider shorts below that level or see if the level is confirmed as resistance upon a pullback, before seeking setups. Whilst the pattern assumes a target around 82, we could expect some interim support to build around 100 and 90 along the way.