What’s going on with gold?

Gold has been unable to take advantage of the modest weakness we have seen in the US dollar in the past few days with the metal holding below $1840 at the time of writing.

The metal has been pushed around within the $1800-$1875ish range over the past couple of weeks amid all the central bank rate hikes, inflation worries and recession talks. There are clearly conflicting factors at play which has prevented the metal from making a decisive move in one or the other direction. Rising yields and a generally strong dollar are never positive influences for assets that pay no interest or dividends, yet the fact it hasn’t completely broken down means there are other factors supporting it. These include safe haven flows amid the turmoil in crypto markets and the sell-off in equities over the past few months, as well as demand from inflation hedging.

But if I can point to one reason, it is this: rising interest rates.

The Bank of Japan aside, all other major central banks have either already started or promised to start a hiking cycle. This is making government debt more attractive as an asset class to hold for yield-seekers. It is also precisely why low-div-yielding stocks have been hit very hard in this bear market.

Even the ECB is turning hawkish despite worries about a recession, inflation is running very hot in the Eurozone. Today, the central bank’s Rehn said it is very likely that the September rate hike is bigger than 25 bps. Obviously, the market is already pricing in more than – at least 75 bps for both July and September combined – but comments such as these clearly show that the ECB is onboard with what the market is demanding. So, the ball is in the ECB’s court.

Of course, it is not just the ECB lifting interest rates. Even the SNB surprised with 50 basis point hike last week, while the BoE delivered the expected 25. The Fed went ahead with 75.

All told, the aforementioned conflicting signals point to continued range-bound trading at best. But there is a danger that even gold might suffer a sharp sell-off as rate hikes continue to dominate the agenda for the next several months, until something changes fundamentally. 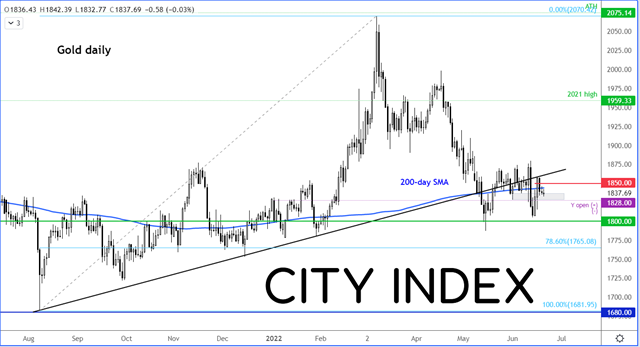 Gold has shown some willingness to hold below the 200-day average, which increases the risks of technical selling as speculators get discouraged by its performance and dump the metal in favour of something that’s moving. So far, we haven’t seen a strong desire to sell gold meaningfully, but that could change very quickly if the macro backdrop doesn’t improve for the metal.

Bullish speculators will now need to see gold reclaim the broken trend line first and foremost, at around $1860. If this condition is met, then it could pave the way for a bit of recovery amid fresh technical buying.

You can trade with City Index by following these four easy steps:
Open an account, or log in if you’re already a customer
Search for the company you want to trade in our award-winning platform
Choose your position and size, and your stop and limit levels
Place the trade
Related tags: Gold Commodities Trade Ideas