After raising rates by 100bps in September to bring the benchmark interest rate to 1.75%, Sweden’s Riksbank is widely expected to raise rates by at least 75bps when it meets on Thursday.  Sweden’s October inflation reading was 10.9% YoY vs a previous reading of 10.8% YoY.  Riksbank Governor Ingves recently said that Sweden’s rate needs to be higher than that of the ECB’s deposit rate to help strengthen the Swedish crown and prevent an import of inflation.  The ECB currently has deposit rates set at 2% and will meet on December 15th and February 2nd, 2023, before the Riksbank meets again later in February 2023.  If the Riskbank wants to stay ahead of the ECB in terms in higher interest rates, a rate hike by 100bps at the Thursday meeting is not out of the question, especially with inflation so high.  However, the housing sector may be weighing on the minds of the Riksbank Committee.  The housing market  is down roughly 14% from its recent peak to the current trough. As a result, the Committee may only wish to raise 75bps at this meeting.

EUR/SEK has been rising since making a low of 9.8751 on November 2nd, 2021.  The pair has been moving in an orderly channel since mid-August 2022 and recently made a near-term high of 11.0958 on October 21st.  EUR/SEK pulled back to the 50% retracement level from the lows of mid-August to the highs of October 21st , near 10.6826.  This was also the bottom trendline of the channel.  The pair bounced and is currently trading back in the middle of the channel, banging up against resistance from the lows of October 24th at 11.0052. 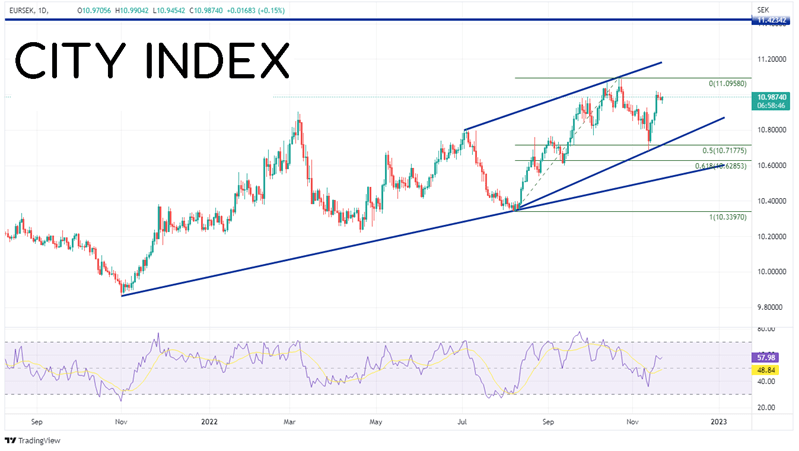 On a 240-minute chart, EUR/SEK is forming a flag formation at the previously mentioned resistance area. Expectations are that price will breakout in the same direction as the move before the flag, which in this case would be higher.  The target for a flag formation is the height of the flagpole added to the breakout point.  The current target for EUR/SEK is near 11.2927.  However, if the pair is to reach its target, it must first pass through the flag highs at 11.0212.  Once above there, the next resistance level is the highs from October 21st at 11.0958, then the top, upward sloping trendline of the channel near 11.2025.  Note that the pandemic highs from March 2020 cross at 11.4234.  However, if price fails to break above the flag formation, the first support at the flag lows at 10.9493.  Below there, horizontal support crosses at 10.9281 and 10.8455. 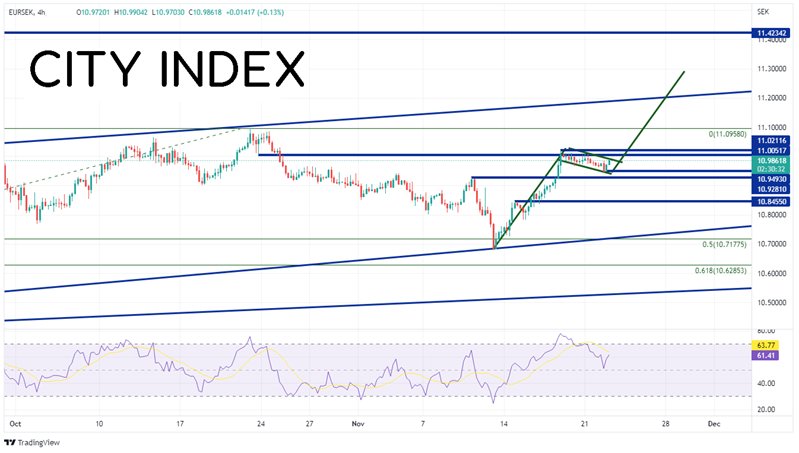 The Riksbank meets on Thursday and the decision to raise by 75bps or 100bps could have implications for the next direction in EUR/SEK.  If the Riskbank is less aggressive, the pair could break above the flag formation and be on its way to target at 11.2927. However, if the central bank is more aggressive, EUR/SEK may pull back.