According to German newspaper Boersen-Zuitung, the ECB’s Holzmann wants to raise key interest rates to 0% by yearend.  This would require the ECB to raise deposit rates by 50bps before the end of the year. “An increase to the deposit rate to zero by the end of the year would be important for monetary policy because it increases optionality” Holzmann said.  His comments come after the ECB meeting on March 10th, in which the central bank had already reduced the timeframe for the ECB to end its QE program to Q3 from Q4.  He also noted that the forecast on March 10th for growth and inflation were outdated due to the Russia/Ukraine war.  At the ECB meeting, Christine Lagarde said that the ECB sees inflation for 2022 at 5.1%. Holzmann’s comments come before Lagarde speaks tomorrow and the EU Flash CPI print for March on Friday (6.6% YoY is expected).

Just a day prior, BOE’s Baily had an opposite take on inflation. Bailey stuck to the BOE statement and said that increased inflation caused by the Russia/Ukraine war could squeeze household incomes and posed a risk to financial stability.  He added that the “hit to real incomes in Britain from rising energy prices this year now looked likely to be greater than any single year during the 1970s!”

As a result of the comments from Baily and Holzmann over the last 2 days, EUR/GBP has been moving aggressively higher.  On the daily timeframe, the pair has been moving lower in an orderly channel since April 2021.  On March 4th, the pair broke below the bottom trendline of the channel to the 127.2% Fibonacci extension from the low of February 3rd to the highs of February 7th near 0.8232. The next day, EUR/GBP made a new low and reversed, closing back inside the channel and posted a false breakdown.  The pair is moving to test the opposite side of the channel today, however, it is getting held down by horizontal resistance from the highs of February 7th at 0.8478.

On a 240-mintue chart, EUR/GBP appears to have broken the neckline of an inverted head and shoulders pattern.  The target for the pattern is the distance from the head to the neckline, added to the breakout point above the neckline, which is near 0.8715.  However, if price is to get there, it must first pass through the top trendline of the long-term channel near 0.8520.  Above there, horizontal resistance crosses at 0.8553 and 0.8600 (see daily).  However, notice the RSI on the 240-minute timeframe is in overbought territory, indicating it may be time for a pullback.  First horizontal support is below the neckline at 0.8367, then the low of March 23rd at 0.8296.  Below there, price can fall to the head of the inverted head and shoulders pattern near 0.8202. 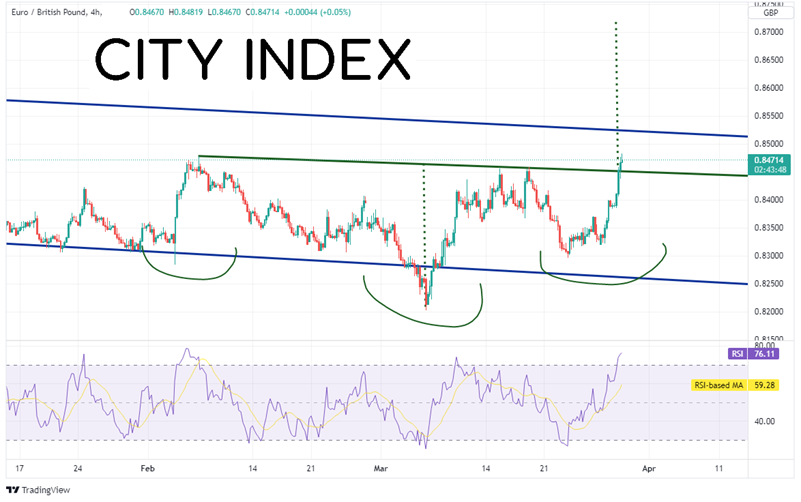 Dovish comments from BOE’s Bailey and hawkish comments from ECB’s Holzmann have sent EUR/GBP higher.  However, Christine Lagarde speaks tomorrow and the EU releases flash CPI for March on Friday.  If Lagarde is more dovish or if the CPI print is weaker, EUR/GBP could move lower, back into the channel.