After massively disappointing traders’ high hopes back in December, “Super” Mario Draghi and company were not going to make the same mistake again. Expectant traders and analysts were looking for the ECB to cut its deposit rate by 10bps and increase its quantitative easing program by €10B per month, but the so-called “whisper numbers” were even more aggressive than that. Regardless, the ECB busted out its big bazooka at the conclusion of today’s monetary policy meeting, enacting a series of aggressive proposals.

In the words of the ECB itself, these are the six actions taken by the central bank:

“At today’s meeting the Governing Council of the ECB took the following monetary policy decisions:

(1) The interest rate on the main refinancing operations of the Eurosystem will be decreased by 5 basis points to 0.00%, starting from the operation to be settled on 16 March 2016.

(4) The monthly purchases under the asset purchase programme will be expanded to €80 billion starting in April.

(5) Investment grade euro-denominated bonds issued by non-bank corporations established in the euro area will be included in the list of assets that are eligible for regular purchases.

(6) A new series of four targeted longer-term refinancing operations (TLTRO II), each with a maturity of four years, will be launched, starting in June 2016. Borrowing conditions in these operations can be as low as the interest rate on the deposit facility.”

In other words, the central bank drastically exceeded the markets expectations for easing. In terms of the most widely-watched changes, the ECB cut its deposit rate by the anticipated 10bps and expanded its QE program by €20B per month, twice as much as traders were looking for. Additionally, Draghi and company reduced two of its other key interest rates, expanded its universe of eligible securities to purchase through its QE program, and enacted another series of operations to increase bank liquidity. This is the “big bazooka” that many traders were expecting to see back in December, and as the saying goes, “it’s better late than never” for euro bears. As we go to press, Dr. Draghi is taking the stage for his press conference, which will hopefully shed more light on the ECB’s decision.

Another cliché maxim that you may have heard before is “once burned, twice shy” and that’s exactly how those euro bears felt heading into today’s ECB announcement. Short positioning in the euro was definitively less aggressive than back in December, leaving plenty of room for the single currency to fall on the ECB’s aggressive action.

From about 1.0975 before the release, EUR/USD has collapsed to a low of 1.0835 as of writing. In the short term, additional moves will depend heavily on any revelations in the upcoming press conference, but strong support, dating back to the ECB’s last big meeting in December, comes in the 1.0800-20 zone, so bears may want to tap the brakes as long as we remain above that key support level. That said, any near-term bounces may stall out quickly now that the ECB is back in a definitively dovish posture. 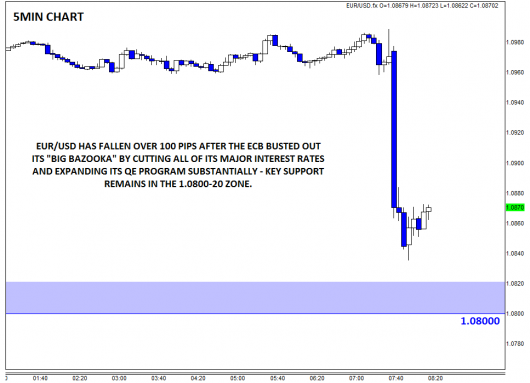