Intel Q3 preview: where next for Intel stock?

A bleak outlook for Intel’s PC and Data Centre segments could detract from the Mobileye IPO.

When will Intel release Q3 earnings?

Intel’s Q3 earnings are expected after the closing bell on Thursday October 27, with an earnings conference call at 14:00 (Pacific Time) – that’s 22:00 UK time.

Over the last year, Intel – like other chip companies – has faced supply-side constraints due to the global chip shortage. But now the additional pressures of inflation and rapidly declining economic activity have caused a reduced outlook for global PC and tablet demand too.

It’s no surprise then that Intel is expected to report falling revenue again for its core Client Computing businesses segment – which creates operating systems and supporting hardware for PCs – down 21% YoY.

The company’s second-largest sales segment, the Data Centre – which develops platforms for computing, storage and network functions – is also predicted to see revenue drop by 16% YoY as the economy and execution issues impact sales.

In Q2, Intel did anticipate that this weakness would persist as competition in the chip industry grows, and the company loses market share to Advanced Micro Devices and Nvidia. Apple is also introducing its own M1 chip that could threaten high-end Central Processing Units (CPUs).

There are brighter spots expected among the company’s smaller units:

A lot of focus will be on the Mobileye segment, as by the time Intel’s earnings are released on Thursday, it’s expected the self-driving tech firm will finally be spun off via an IPO. Due to market conditions, the listing was delayed from earlier this year, and is now smaller than expected – both in terms of the number of shares and the valuation it expected.

Intel is still betting on the self-driving segment to provide a boost to the company’s core business – it’s hoping to raise $820 million at the high end of the pricing range, which will go toward building more chip plants.

Learn more about the Mobileye IPO.

But the cash injection alone might not be enough, as Intel joins a raft of tech firms – including the likes of Microsoft, Snap, Meta and Netflix – that are planning cost-saving measures to help boost the bottom line. Pat Gelsinger has already told workers that ‘targeted’ layoffs are coming.

Intel has already revised its full year outlook, lowering revenue estimates by $8-11 billion. It’s now targeting $65-66bn in annual revenue, which would be down 9% to 13% from last year. The company has also already lowered its FY EPS outlook to $2.30, down $1.30 from the previous estimate – which was already 57% lower than last year. But the current landscape has left investors wondering if this be downgraded further.


Where next for INTC stock?

Intel shares have rebounded since hitting their lowest level since 2014 earlier this month, with the stock currently on course to close up for a third consecutive session today.

The stock could continue to climb toward $27.70 if the current momentum can be maintained before finding some resistance. This not only marks the October-high but also the 2016-low. A break above here would bring $29.50 into view, which is in-line with the 50-day moving average and a level that emerged as support back in March 2015 before remerging as a more solid floor in May 2016.

Notably, the 42 brokers that cover Intel see even greater upside potential with an average target price of $34, some 25% above the current share price and suggesting Intel can return to levels last seen in August over the next 12 months.

On the downside, any renewed pressure could see Intel sink back toward the $25.70 mark, which has been a reliable level of support since the stock rebounded from the recent lows. This is also aligned with the 2015-low. A slip below here would bring $25.00 into view before the seven-year low of $24.70 comes back onto the radar. 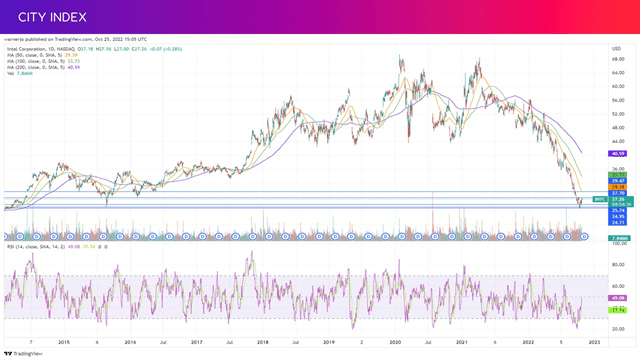 How to trade Intel stock

You can trade Intel shares with City Index in just four easy steps: