Currency Pair of the Week: AUD/CAD

The Reserve Bank of Australia meets on Tuesday to discuss interest rate policy.  Markets are currently pricing in nearly a 60% chance of a 25bps rate hike.  However, there is an outside chance the RBA may do nothing.  At the last meeting, the central bank hiked rates by 25bps to bring the cash rate to 2.85% and said that the committee now expects inflation to peak around 8% this year, vs 7.75% previously.  Last month, Australia released its first monthly report of CPI (previously it was only reported quarterly).  The October CPI reading was 6.9% YoY vs an expectation of 7.4% YoY and a 7.3% YoY reading in September.  Could this cause the RBA to hold?  In addition, the RBA will also have to consider the situation in China.  Australia is heavily influenced by the economic activity in China.  The Caixin Composite PMI for November was 47.0 vs 48.3 in October.  This was the fifth consecutive decline and the third month in a row below the expansion/contraction level of 50.  However, China is also trying to move away from its zero-Covid policy. If the RBA expects China’s economy to begin to expand once again due to the lifting of restrictions, perhaps it has a more hawkish hike.  Also, Australia will release its Q3 GDP this week.  Expectations are for a print of 6.3% YoY vs 3.6% YoY in Q2.  A big miss could also offer swings in the Australian Dollar.

The Bank of Canada meets on Wednesday to discuss interest rate policy.  Markets are also pricing in a 25bps rate hike, although there is a 30% chance that the BoC may hike rates by 50bps!  At the last meeting, the central bank surprised markets by only hiking rates by 50bps vs an expectation of a hike of 75bps.  This brought the overnight rate to 3.75%.  The Committee also said that it excepts to need to increase rates further, as its favorite measure of inflation, Core inflation, has not showed signs yet of meaningful easing.  However, since the BoC last met in October, the jobs picture has been extremely strong, with a print of 108,300 new jobs in October and 10,100 new jobs in November.  What’s makes the jobs data even more impressive is that in October, 119,300 new full-time jobs were created and in November, 50,700 new full-time jobs were created! This may give the BoC more confidence to hike rates by 50bps.

On a daily timeframe, AUD/CAD has been on a downward sloping channel since the pair reached a high of 0.9994 in late February 2021.  The pair moved lower within the channel until it reached a low of 0.8599 on October 20th, 2022. As AUD/CAD moved lower, it remained under the 200 Day Moving Average for a majority of the time, with the exception of March and April 2022. That is, until late November of this year.  After making the low on October 20th, AUD/CAD has been moving higher and is approaching the top trendline of the channel. It has also broken back above the 200 Day Moving Average near 0.9009 and the 38.2% Fibonacci retracement from the highs of February 2021 to the lows of October 2022 near 0.9132.  The pair is trading near that level at the time of this writing. 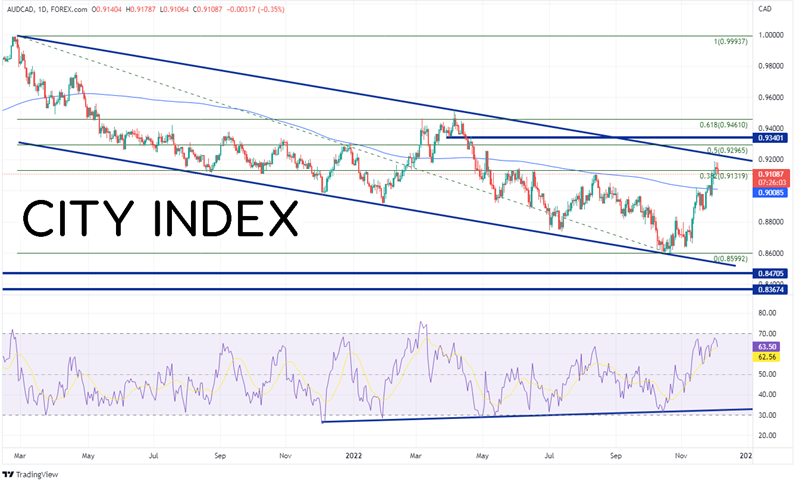 On a 240-miute timeframe, AUD/CAD has been moving higher in a rising wedge since mid-November and is near the apex.  Expectations are that price will break lower out of an ascending wedge with a 100% retracement target.  In this case the target is near 0.8866.  If price does break lower and head towards target, it must first get through horizontal support at 0.9035, the 200 Day Moving Average at 0.9008 (see daily), and additional horizontal support at 0.8962.  However, if AUD/CAD bounces off the support level, first resistance is at the intersection of the top trendline of the long-term channel and the top trendline of the ascending wedge near 0.9230, then the 50% retracement from the February 2021 highs to the October 2022 lows at 0.9297.  Above there, the next level of resistance is the lows from mid-March 2022 at 0.9340. 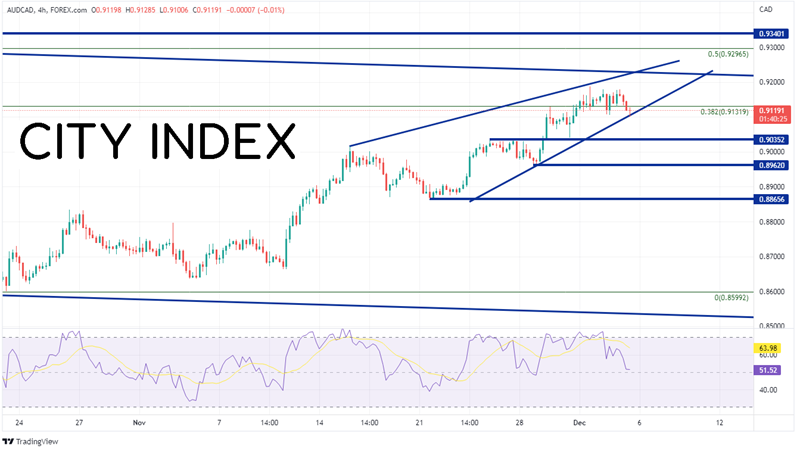 With both the RBA and the BoC meetings this week to discuss interest rate policy, AUD/CAD could be volatile. Also, if the RBA is more dovish due to the poor manufacturing data from China, the pair could move much lower. However, if the RBA focuses on the loosening of Covid restrictions in China, perhaps it hikes 25bps and will be more hawkish, which could cause AUD/CAD to move higher!

Index in Focus: China A50
By:
Joe Perry CMT