After trouble in the housing market and a recent bout of poor data from China, including weak Retail Sales and Industrial Production, China has implemented several stimuli polices to help the beleaguered sectors.  Earlier in the week, China announced plans for $29 billion in special loans to help troubled developers in the housing market.  In addition, it cut loan prime rates, including a 15bps cut in the 5-year.  This was viewed as helping the housing market, as this is the rate mortgage rates are based off.  Earlier today, China announced 19 additional policies to help the economy, worth $146 billion.  These policies will primarily support infrastructure projects.  However, although these may be positive steps towards helping housing and infrastructure, will it be enough to help the broader economy?

One currency that has seemed to get a bid on the back of the China news is the Aussie.  EUR/AUD had made a Year-to-Date high on February 4th near 1.6226 and quickly began a decent lower. Two months later, on April 5th, the pair made a low of 1.4320 as the Euro sold off due to a lack of commitment by the ECB to raise interest rates.  EUR/AUD then bounced just above the 50% retracement level from the February 4th highs to the April 5th lows, near 1.5273, in an ascending wedge formation.  The pair spiked through horizontal resistance at 1.5354 and resumed the prior trend lower, breaking below the ascending wedge on July 7th near 1.4975.  The target for the breakdown of an ascending wedge is a 100% retracement. Today, after the China stimulus announcements, EUR/AUD reached the 1.4320 level and is currently trading below it! 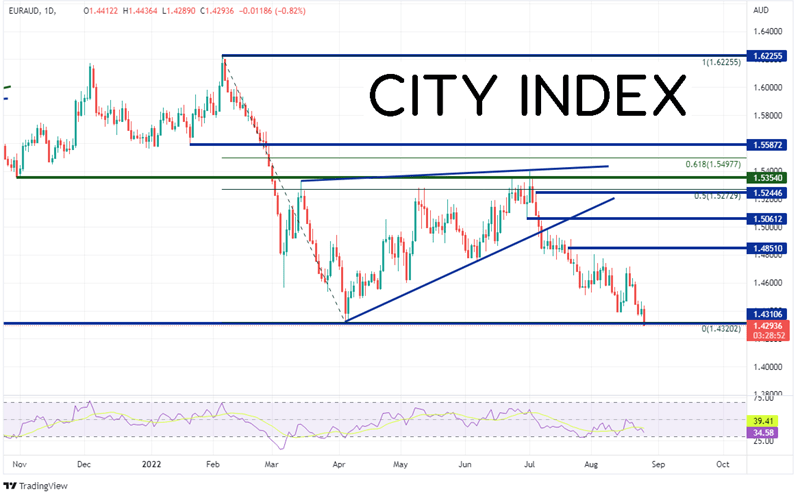 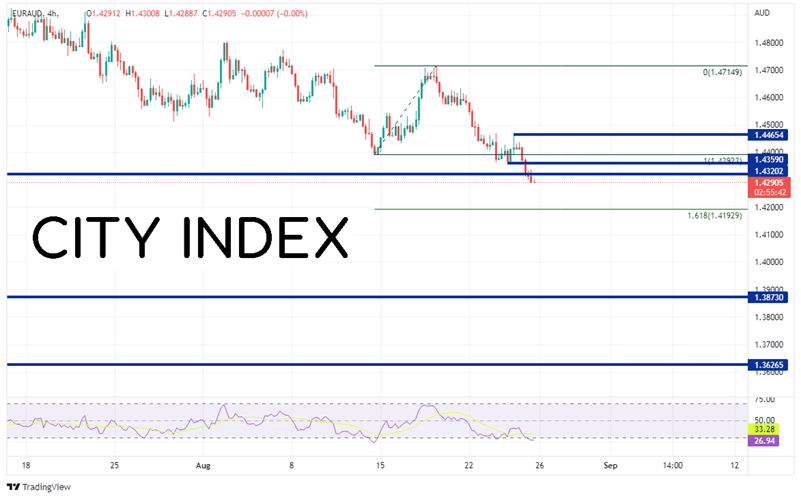 China has begun new economic stimulus measures.  But is it too little too late?  The Aussie doesn’t seem to think so. EUR/AUD has been selling off for a while but has become more aggressive once the stimulus measures were announced.  The pair sits just below a key support break.  Will it continue lower or will this prove to be a false breakdown?