After reaching 145.90 on the back of inaction by the Bank of Japan, the USD/JPY then plunged to as low as 140.70 as news broke that the Japanese government had intervened to stem the drop in the yen. This was the first time since the late 1990s that Japan has intervened in the FX market. The key question is: will the intervention be effective to significantly support the yen, given that the BoJ is effectively at odds with the government?

Earlier, the yen tumbled to a new 24-year low after the Bank of Japan decided to stick with its ultra-loose policy and Haruhiko Kuroda, the BoJ governor, said the central bank would leave its forward guidance unchanged for the next two to three years. So, the BoJ kept rates at minus 0.1% and said it would conduct daily purchases of 10-year bonds at a yield of 0.25%.

In a way you would understand the BoJ’s stance given that core CPI is ‘only’ at 2.8% in Japan, which is very low compared to soaring price pressures elsewhere in the world. But in the eyes of the BoJ rate setters, underlying demand in Japan is weak which should pull inflation back down to 2% target before long.

Kuroda said: “You can expect that there will be no change to our forward guidance for about two to three years…With clear differences in economic and price situation, there is no need for Japan to remove negative rates because others have done so.”

Yet the government feels that the rapidly falling yen on the back of aggressive tightening around the world and soaring commodity prices will only make matters worse as Japan imports more and more inflation. It felt the need to intervene now.

But is it too little, too late? More to the point, is the BoJ undoing the government’s attempt to shore up the yen?

I mean the timing of this was very poor, wasn’t it? Just hours after the BoJ’s inaction, you decide to buy huge amounts of yen with your dollar reserves. The government has so much foreign reserves and it will need to repeatedly buy more and more yens in order to defend its value. For the government’s intervention to be more effective, the BoJ will need to close its diverging monetary policy stance with the US Federal Reserve (and other major central banks around the world).

Unless you have been hiding under a rock, the Fed announced yesterday that it would continue to hike rates aggressively until inflation comes back under control, a move that led to another upsurge in the dollar. And today, the Swiss National Bank raised interest rates by 75 basis points, putting its benchmark rate into positive territory for the first time in ages. The Bank of England is also set to hike its benchmark interest rate for the 7th time today. 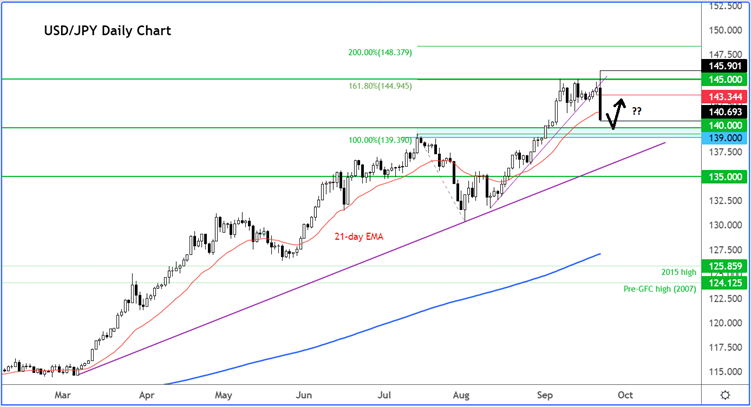