“Long is the way and hard, that out of Hell leads up to light.” – John Milton, Paradise Lost

Last week, we highlighted a big inverted head-and-shoulders pattern on USDJPY, and with rates peeking above the 125.00 level yesterday, bulls finally thought they had fought their way out of proverbial “trading hell” and into the light (see “USDJPY: Bulls Revving Up, but Break above 124.50 Needed”). As experienced traders have learned though, what the market giveth, it can also taketh away; USDJPY reversed sharply to the downside today, falling from a high of 125.30 all the way down to trade briefly below 124.00 earlier. Now, the question on every USDJPY traders’ mind is, “Does today’s reversal mark a significant top, or is it just a setback in the context of the longer-term uptrend?”

From a fundamental perspective, USDJPY continues to be driven by US monetary policy expectations, and in that context, today’s reversal is hardly surprising. The influential head of the Federal Reserve Bank of New York, William Dudley, came out today with lukewarm comments regarding the Fed’s timeframe for raising interest rates, noting [emphasis mine], “Hopefully, we’re going to make progress in terms of our goals…[a]nd so hopefully, in the near future, we’ll be able to actually begin to raise interest rates. When that is precisely, depends on the data.”

While central bankers are not known for being particularly forthright, Dudley’s comments struck traders as particularly ambiguous, especially after a far more hawkish statement from Atlanta Fed President Lockhart last week. In response to these comments and the ongoing global market volatility stemming from China, the implied probability of a rate hike in September have fallen from 55% on Monday to only 39% as of writing, according to CME FedWatch.

On technical basis, the outlook for USDJPY is similarly ambiguous in the short-term but remains long-term bullish. In the immediate term, today’s price action is likely to form a large Bearish Engulfing Candle* on the daily chart, hinting at the potential for a continuation lower tomorrow, and the RSI recently formed a small bearish divergence. That said, the recent trend of higher highs and higher lows remains intact, and the major moving averages continue to trend higher, so traders may look to fade any short-term weakness. In terms of specific levels, a break below the late July “left shoulder” low at 123.00 would point to a deeper retracement toward 122.00, whereas a close back above 125.00 would bring the decade-plus highs at 125.80 or higher back into sight. 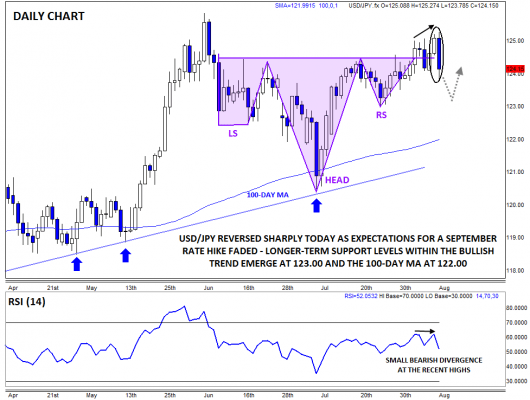