Yesterday, Christine Lagarde’s blog regarding monetary policy normalization in the Euro Area gave the Euro a lift. In summary, she discussed how she expects the ECB to end asset purchases early in Q3, with the first rate lift-off at the July meeting.  She also noted that based on the current outlook, the ECB expects to exit negative interest rates by the end of third quarter.  These comments, along with a strong than expected German Ifo helped lift the Euro.

Today, flash S&P Global/CIPS Manufacturing and Services PMIs for May were released. Individual country PMIs in the EU were mixed, with the headline EU PMI Manufacturing, Services, and Composite prints slightly worse than expected.  However, the UK data was much worse.  The Manufacturing PMI dipped to 54.9 vs 55.3 expected and 55.5 in April.  However, the Services PMI was much weaker at 51.8 vs an expectation of 57 and a reading of 57.7 in April.  This dropped the Composite PMI to 51.8 vs 55 expected and 58.2 in April.

Taken together, these two events have helped EUR/GBP push higher, moving from Monday’s low of 0.8433 to today’s high of 0.8585. On a daily timeframe, the pair had been moving lower in an orderly channel since April 2021 from a high of 0.8719 to a low of 0.8203.  On May the 5th, the BOE hiked rates by 25bps, as expected, but noted that global inflationary pressures have intensified, which caused the central bank to lower its growth forecasts.  This sent GBP lower, and EUR/GBP higher, pushing the pair above the top, downward sloping trendline of the channel near 0.8480.  Price pulled back to test the top trendline, however support held at the 50 Day and 200 Day Moving Averages near 0.8406 and 0.8442, respectively, and EUR/GBP continued higher. 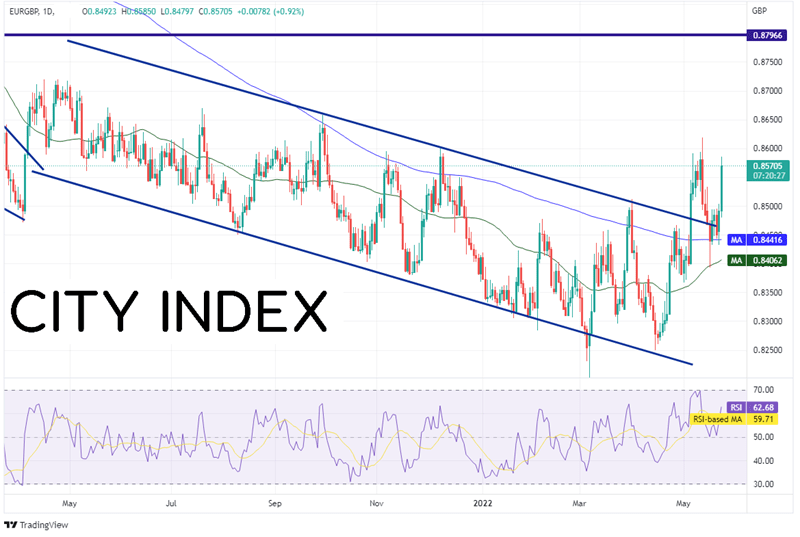 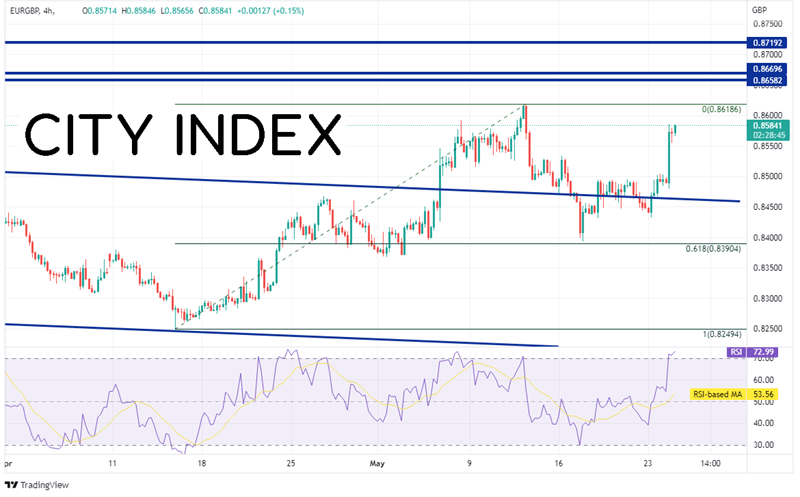 Hawkish comments from ECB President Christine Lagarde and weaker PMI data from the UK have helped push EUR/GBP back towards recent highs.  Could it continue?  If price breaks above 0.8619, the pair has room to run.  Watch for additional comments from both ECB and BOE members on what could be expected at their respective Monetary Policy meetings.