After a sharp BOJ-inspired drop this morning, Western equity markets were able to turn slightly higher in the afternoon. Sentiment was partly boosted by the still-rallying oil prices as well as robust earnings from Facebook which helped to lift the social network to a fresh all-time high. Other commodities also rallied as the dollar sold off on the back of a weaker-than-expected first quarter US GDP estimate. This helped to push expectation about the next Federal Reserve rate increase further out, boosting the appeal of non-interest-bearing precious metals in particular, some of which had already been in high demand. Gold, silver and platinum ignored the rebound in stock markets and rallied across the board, with the latter breaking out to a new high above last week’s peak of $1042, thus triggering further momentum buying interest. Silver was approaching $17.70, a key level which we highlighted in one of our reports on Wednesday HERE.

At the time of this writing, gold was testing one of its own key resistance area between $1263 and $1269, a range which had previously been resistance. While it is possible that gold’s rally may again come to a halt here, the underlying price action suggests that a bullish breakout may actually be the outcome instead. As can be seen, the precious metal has already broken above a short-term trend line and it has made some higher lows within the consolidation pattern. The momentum indicator RSI has worked off “overbought” conditions through time rather price, which is bullish. What’s more, the RSI has broken its own corresponding bearish trend line now. Furthermore, the faster 21-day exponential moving average is once again pointing higher and is holding above the 50-day simple moving average, which in turn is comfortably above the rising 200 SMA now. All of these indicators suggests that the bullish momentum may be accelerating again.

If gold does break higher as the above technical indicators suggest it might, then the next potential leg higher could be explosive. That is because the sellers were not even able to push gold down to re-test some of the longer-term technical levels following its initial rally earlier in the year, such as the 200-day moving average at around the $1145/6 area. The relatively-shallow pullback after a prolonged period of consolidation near the highs basically implies that the buyers were more in control compared to the sellers. A breakout above the previously-mentioned resistance area of $1263-$1269 would initially target the recent multi-month high at $1284/5. Thereafter, the Fibonacci extension levels of the most recent pullback come into focus at $1305 (127.2%) and then $1331/2 ($161.8%).

But let’s not get too far ahead of ourselves and wait for gold to actually break higher before thinking about its next likely move. For all we know, all it takes is one large sell order to trigger a change in momentum and sentiment. Indeed, if gold were to break back below the broken resistances such as $1250 or $1230 then a pullback to at least $1200 would then become highly likely. But whichever direction gold eventually decides to break, it should offer plenty of trading opportunities. 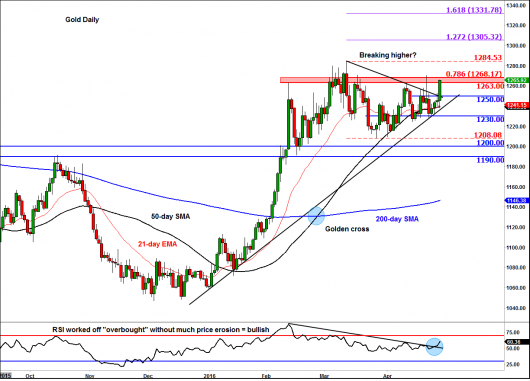 Gold looking to extend rally as yields and dollar retreat
By:
Fawad Razaqzada