The UK’s latest economic data proved to be disappointing yet again this morning and the response from traders has been decisive as they sold the GBP/USD currency pair. Against the euro however, the pound has been more resilient thus far. The single currency, which tends to move inversely with stocks, has weakened in response to the rallying equity markets. But in the case of the pound, we had some actual fundamental news that helped to push the GBP/USD lower as the latest industrial and trade data raised doubts over the strength of the UK’s economy in the third quarter.

UK manufacturing production unexpectedly dropped 0.8% month-over-month in July after edging up 0.2% the month before. Expectations were for a small increase. This weighed on the overall factory output, which fell 0.4% in the same month. Meanwhile, the trade deficit also widened sharply in July – to £11.1 billion from £9.5 billion previously. This was the biggest gap in the goods trade balance since July of last year.

Attention will now shift to Super Thursday – a term coined for the Bank of England’s dual release of the minutes of the previous meeting, as well as the latest policy statement. Although no change is expected for this month, meaning that it may not be a “super” day after all, the minutes of the previous meeting will nonetheless be monitored for clues about the timing of the first interest rate hike. In this regard, the vote composition may garner more attention than usual.

From a technical point of view, the EUR/GBP has been stuck inside a large consolidation pattern since March this year after numerous half-hearted attempts by the sellers to push price below the psychological hurdle of 0.7000 failed to materialise.  As a result, we have seen several relatively wild counter-trend moves as short-term traders rushed to cover their short positions. So far however, the corresponding rallies have been short-lived, and some of the key resistance areas have been defended successfully. Given the lack of clarity on the timing of UK interest rate rises and the continued programme of asset purchases from the ECB, one should expect to see more side-ways action on the EUR/GBP, perhaps with a hint of bearish bias due to the growing divergence between monetary policies of the ECB and BoE.

But with the so-called Super Thursday just one day away now, the EUR/GBP may nonetheless be in for a bit of volatility in the short-term. The daily chart of the EUR/GBP, below, suggests that the latest counter-trend move has come to a halt for the time being around the 200-day moving average. What’s more, the bulls have failed to decisively break above horizontal resistance at 0.7385. Unsurprisingly, the momentum indicator RSI is now rolling over after climbing to the ‘overbought’ territory of 70 towards the end of last month.

As things stand therefore, it looks like the bears are in control who may be targeting at least the 38.2% Fibonacci level of the most recent upswing at 0.7235, with further support seen slightly lower at 0.7220 (previously resistance). But should the EUR/GBP break below here then the next bearish targets could be the 100-day moving average at 0.7170 or the 61.8% Fibonacci level at 0.7120. Below 0.7120, there are not many more technically-important levels until that 0.70 handle.

Meanwhile the bulls will first and foremost want to see a closing break not only above the 200-day moving average but also the aforementioned resistance at 0.7385. If realised, we should then expect to see some further follow-up technical buying towards the next key resistance at 0.7480 or the long-term bearish trend line around 0.7500. 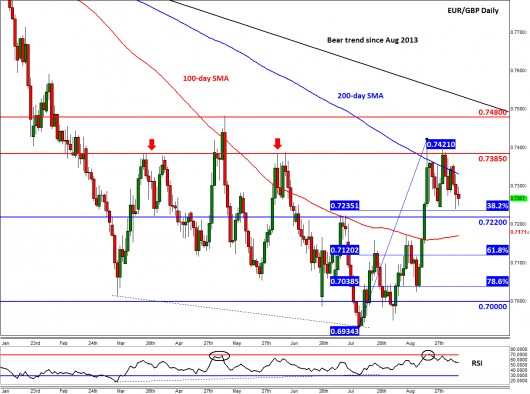