Bank of England hikes rates by 50bps; More to come?

The Bank of England (BOE) hiked rates by 50bps at its Interest Rate decision meeting today to bring the key interest rate to 2.25%.   Note however that the vote wasn’t unanimous.  Three members of the MPC voted for a 75bps rate hike. Recall that at the last BOE meeting, the Board said that peak inflation could be above 13% in October.  However, today the MPC said that the UK energy price guarantee will significantly limit further inflation rises and support demand, relative to August’s forecast.  New Prime Minister Liz Truss recently announced a plan that would cap yearly energy expenses at 2,500 Pounds.  Details of the plan, as well as other tax cuts, are expected to be announced tomorrow.  As a result, the Committee lowered its inflation peak forecast from 13% to under 11% and said that a “deep” recession may be averted.  In addition, recall that the MPC had called for a recession in Q4, lasting for approximately 5 quarters.  The BOE moved that timeline forward, as the central bank fears that the extra bank holiday due to the Queens funeral may have taken a hit to the economy, and that the UK may already be in a recession.

In addition to the rate hike, the BOE announced that it would start to unwind its holdings of UK Government Bonds by over 80 billion Pounds over the next 12 months.

After the FOMC’s decision to hike rates by 75bps yesterday, it seems that the GBP/USD may be headed lower.  The US is aggressively hiking rates with no fears of recession.  The BOE is hiking rates less aggressively and fears it may already be in a recession. (Technically the US has had 2 periods of negative growth, but the Fed doesn’t recognize that as a recession).  Therefore, GBP/USD has been moving lower. On a daily timeframe, GBP/USD has been moving in a downward sloping channel since late April when price was near 1.2843.  After yesterday’s FOMC meeting, the pair tested the bottom trendline of the channel and made a new 37 year low at 1.1235.  In addition, price formed a descending wedge, within which the pair still trades inside today.  GBP/USD made a lower low today at 1.1211, bouncing off the bottom trendline of the wedge. 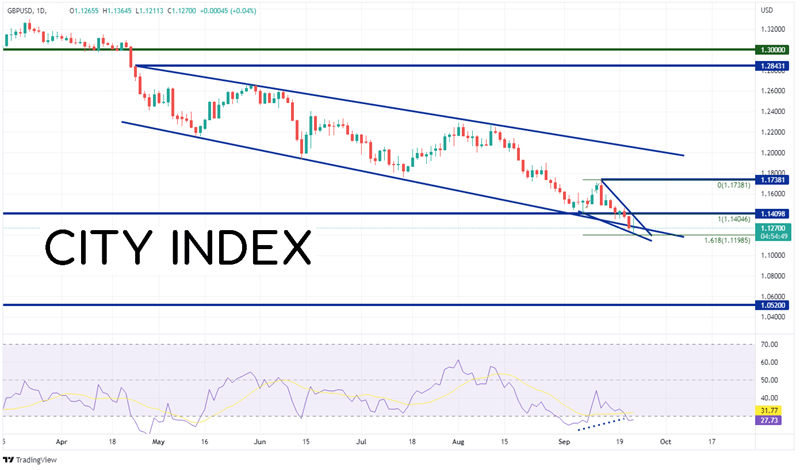 If GBP/USD continues to move lower, the first level of support is the 161.8% Fibonacci extension from the lows of September 7th to the highs of September 13th near 1.1198.  This is also the bottom trendline of the wedge.  If price breaks below, the next level of support isn’t until the lows of 1985 at 1.0520.  However, notice that the RSI is diverging with price in oversold territory, an indication that the pair may be ready for a bounce. If it does, the first resistance level is at today’s highs and the top trendline of the wedge near 1.1365.  Above there, price can move to previous support at 1.1410 and then the highs from September 13th at 1.1738 (which is also the target for the upside breakout of the descending wedge).

Despite a rate hike by the BOE of 50bps, GBP/USD is near 37-year lows.  Why?  Because the Fed hiked rates by 75bps yesterday and said that more rate hikes are on the way.  The pair appears that it will continue to move lower, however there may be a bounce in store as the price action has formed a descending wedge pattern, which is bullish.  However, as long as the Fed continues to hike rates more that the BOE, GBP/USD should continue to move lower.