Tesco Q1 preview: Where next for the Tesco share price?

When will Tesco release its Q1 results?

Tesco is scheduled to release a first quarter trading update on the morning of Friday June 17.

The headline figure that markets will be concentrating on is like-for-like sales, which analysts believe rose 0.9% in the first quarter compared to the year before.

Tesco has already provided a wider than usual guidance range for this financial year due to the elevated level of uncertainty plaguing its outlook. While this makes it more difficult to gauge how Tesco will perform this year, it also presents an opportunity for this to be tightened should it gain more clarity as the year goes on. It has said the ultimate outturn will be dependent on how quickly customer’s shopping habits normalise following the pandemic, how inflation plays out, and the amount it has to invest in its price position as it battles to keep prices low amid the cost-of-living crisis.

Currently, Tesco has said it is aiming to deliver £2.4 billion to £2.6 billion of retail adjusted operating profit this year. That will be down from the £2.8 billion profit delivered in the last financial year but will remain above pre-pandemic levels. Notably, analysts currently believe Tesco can beat its own guidance and deliver a profit of £2.66 billion over the full year. The supermarket’s retail free cashflow should be between £1.4 billion to £1.8 billion this year, also down from the unprecedented levels seen last year but higher than what was being delivered before the Covid-19 crisis started.

The main weapon of choice of supermarkets for decades in an intensely competitive industry has been pricing, with the momentum gained by German discounters Aldi and Lidl forcing other players to strive to offer the best value. That is now likely to prove more important than ever as rampant inflation starts to feed through to food prices, and Tesco’s market-leading position and scale should prove hugely beneficial while wholesaler Booker also adds another advantage. Rampant inflation is also causing more cost-conscious shoppers to turn to own-label products, which is another area that Tesco has been focused on building-out in recent years.

With this in mind, Tesco has been the only member of the Big Four supermarkets to have continued to gain market share over the past year, while Sainsbury’s, Asda and Morrisons have all ceded ground to the German discounters, according to data from Kantar Worldpanel.

Tesco is likely to use its buying power and scale to maintain its price position for as long as possible. It may be able to delay passing higher costs onto consumers compared to some rivals, but they are inevitable. Still, Tesco is prioritising market share over profitability, which injects some uncertainty over the rest of the year. A £1 billion cost savings plan over the next three years will help counter rising costs.

Tesco shares hit fresh all-time highs back in January after demonstrating its strength during the pandemic, but the stock has seen its value collapse 18% as new inflation-driven challenges emerged this year.

Shares hit a 10-month low yesterday of 242.3p before partially rebounding to close at 246.1p, which should be treated as the initial floor for the stock now that it is finding higher ground today. A slip below here could be significant as it opens the door to the 238p level of support seen back in January 2021. That could prove to be a more important downside target going forward as a break below here would bring sub-230p back into play for the first time since August 2021. The ultimate floor for the stock should be considered at 222p.

The downwards pressure on the stock over the last week has pushed the RSI firmly into bearish territory and trading volumes have continued to steadily rise, with the five-day average volume at time sitting over 80% higher than the 100-day average. This suggests the recent downtrend could gain more momentum.

On the upside, Tesco shares need to recover back above the 260p mark before they can attempt a more significant jump higher toward the 50-day moving average at 267.5p and then the longer-term moving averages that are converging around the 276p mark. The 21 brokers that cover the stock believe Tesco can bounce back and hit fresh all-time highs of 314p over the next 12 months, implying it can rally some 26% from current levels. 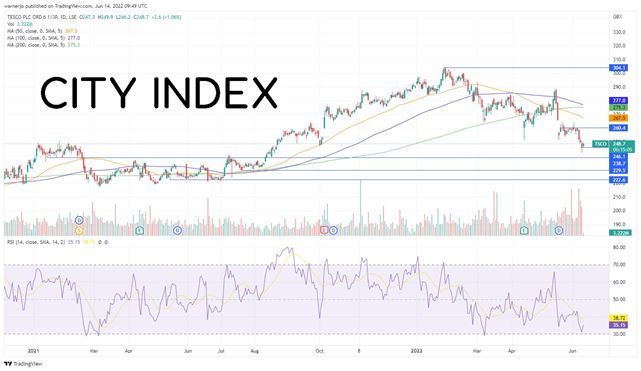