Stocks and dollar could extend drop

Although off their worst levels, US and global indices remain on a shaky footing. The dollar remains undermined after coming under pressure as investors started unwinding their carry trades. Both equities and the dollar may have more room to the downside.

Previously, the greenback was rising because investors were borrowing in a low-interest rate currency and converting the borrowed amount into the dollar. But due to slump in risk assets, we are now seeing the opposite of that, with investors going into lower yielding currencies such as the yen and franc, as well as gold, which pays no interest. In other words, it is a flight to quality.

Sentiment has been overall bearish towards equities for most of the year so far, as investors’ list of worries grow ever larger. Inflation. Interest rate hikes. Low economic growth. Stagflation. Recession. Perhaps most importantly for stocks, the Fed is not there to provide cushion, like before. In one of his most hawkish remarks, Fed Chair Jerome Powell on Tuesday said that interest rates will rise until there is “clear and convincing” evidence that inflation is in retreat. That could be a long wait.

Consumer confidence is likely to drop further as incomes are squeezed. Those big falls in shares of retailers – Target and Walmart – and others such as Amazon and Apple we saw on Wednesday certainly point towards this trend, as profit margins are squeezed at a time when consumers are likely to cut back on their spending. The outlook does not look great. Producers will be passing on raised input costs onto consumers, and this will ensure inflation is not going to be easing significantly any time soon, at a time when the economic outlook also appears grim. 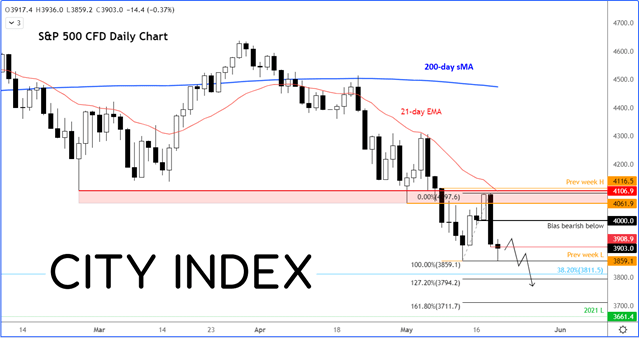 Meanwhile from a technical point of view, the selling does not look to be over just yet – even if the S&P 500 has bounced off its low. But the fact it has done so without first taking out the low made last week at 3859 is unconvincing. While some might consider this as a potential double bottom, for me it is a typical bull trap that you would encounter in a bear trend. I would be VERY surprised if we don’t break below this level, potentially as early as later today, before heading further low. For indeed, we are in a bear trend. 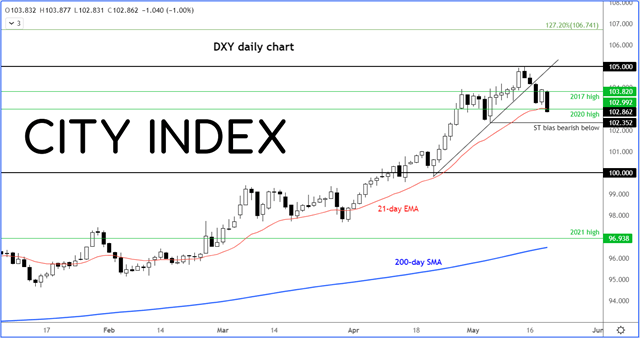 Meanwhile there is potential we could see even more losses for the dollar. If the dollar index breaks 102.35, then we will have a confirmed lower low, which would be a key bearish development for the greenback. This would be significant as it will also mean the stay above the 2020 high was not sustained, which would be considered a false breakout reversal pattern. With the short-term trend line broken, the dollar has already suffered its first key technical blow. But more evidence is needed before we call this the top.