With nine days left to negotiate a Brexit trade deal, comments and deadlines have become meaningless.  The market participants that are left trading through the end of year want to see action.  EUR/USD and GBP/USD are lower on the day, reversing most of yesterday’s afternoon rally.  These selloffs  are mostly due to the move higher in the US Dollar, and the pairs are disregarding Brexit comments.  According to FT, EU’s Barnier has made it clear that he is prepared to talk until year-end.  For the UK’s side, the Sun is reporting that a deal is on the table and both sides want to be home for Christmas eve, but talks are strained.  Why?  Fisheries.  So, a deal seems like it will be done, but markets may not react until pen is on paper!

Yesterday’s move in GBP was primarily due to fears of the new variant of the coronavirus. Brexit took a backseat.  Traders took advantage of the move lower and bought the Pound vs the US Dollar.  Today, GBP/USD is having an inside day, disregarding further Brexit comments.  A done Brexit deal will move the pair aggressively (not just comments).  In addition, positive or negative news on the new variant of the coronavirus could move the pair.

On a 60-minute timeframe, GBP/USD is coiling within a short-term triangle waiting for its next move.  Short-term resistance is at yesterday’s gap fill highs near 1.3500 and then Thursday’s highs near 1.2640.  Support is at yesterday’s lows near 1.3188 and then December 11th lows near 1.3135. However, be weary of light volume moves that can spike through support and resistance. 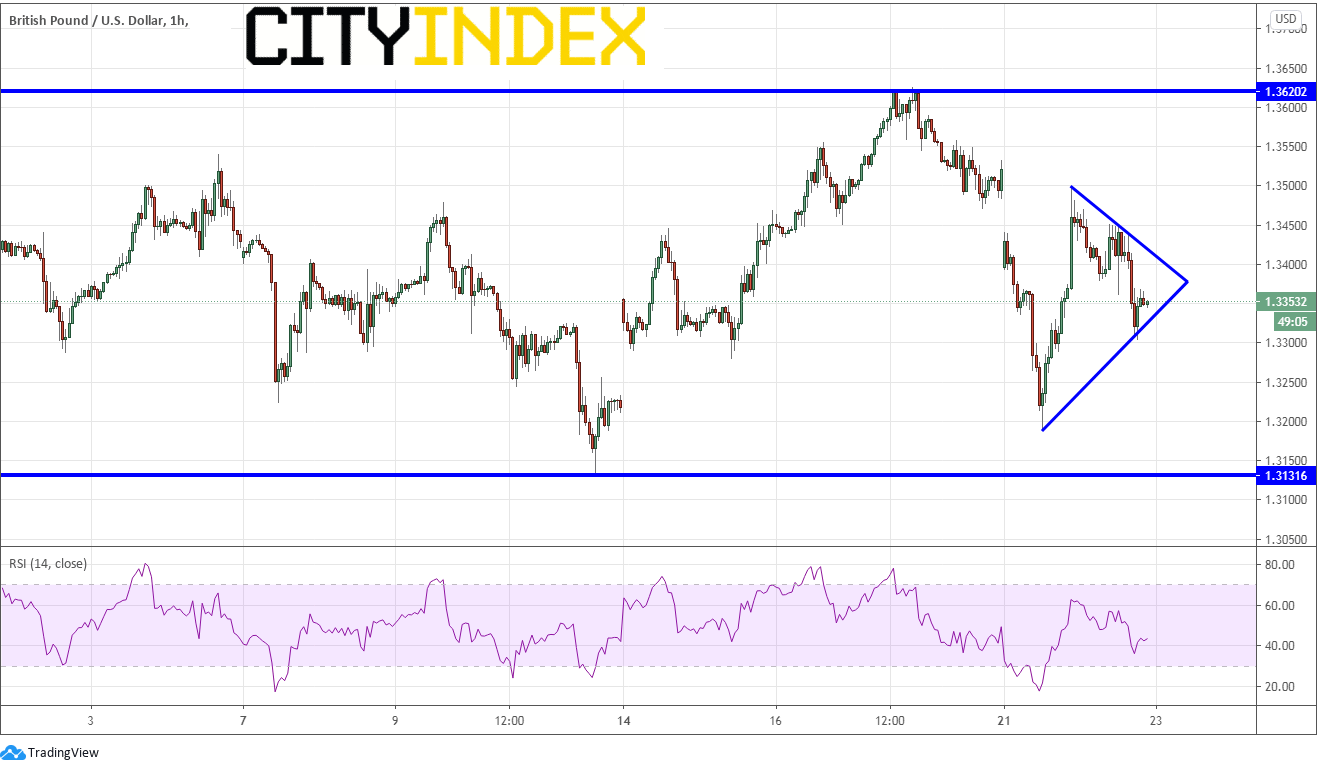 EUR/USD traded 4 pips above yesterday’s trading range and therefore, cannot be considered an inside trading day.  Just as with the GBP/USD, the Euro pair has ignored seemingly positive Brexit comments. However, the pair is moving lower and bulls may be looking to buy at trendline support , which coincides with yesterday’s lows near 1.2129. 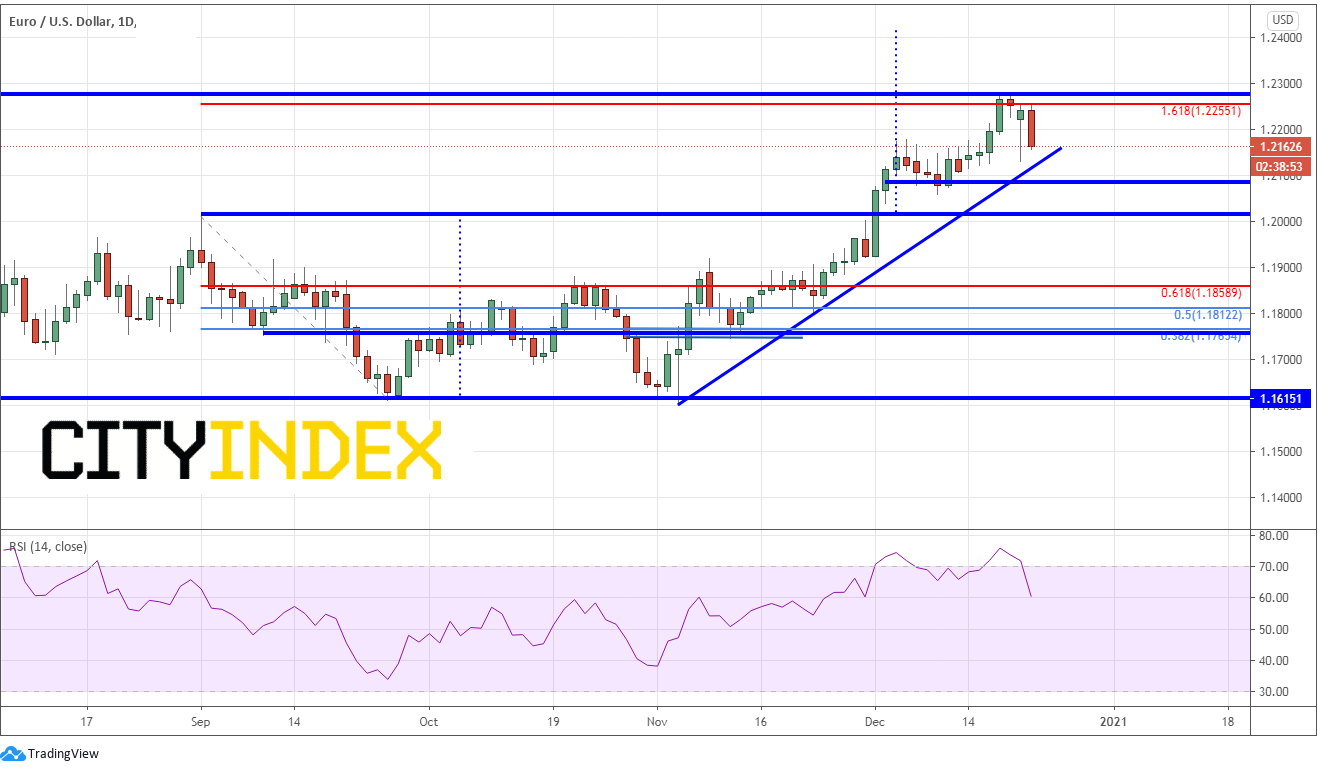 On a 60-minute timeframe EUR/USD has retraced most of yesterday’s move, which is within 7 pips of horizontal support.  If price reaches the 1.2129 level, the RSI will also be oversold on the short-term time frame (and it will be at the daily longer-term support), and bulls will be looking to buy.  Below there, the next horizontal support level is at 1.2060.  Intra-day resistance above near 1.2200, then todays highs at 1.2256.  Above there, final near-term resistance is at Friday’s highs of 1.2272. 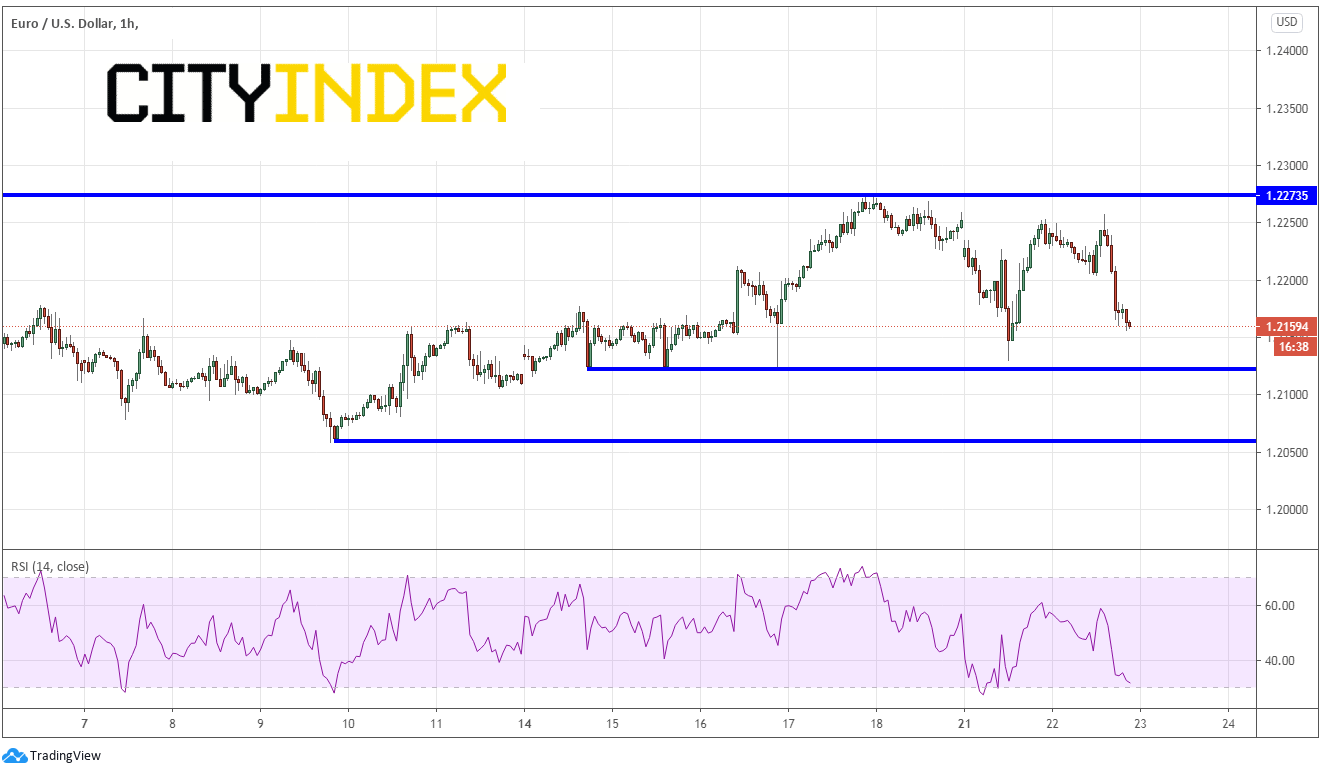 Traders are tired of Brexit officials’ comments.  They want to see action.  Outside of further coronavirus comments, these two pairs should remain stable heading into the Christmas holiday, unless of course, a Brexit deal is reached before then!