‘If’ the BOJ abandon YCC, hold onto your hats (USD/JPY)

With the SNB surprising most with a 50-bps hike, focus now turns to the today’s BOJ - the last dove in town.

There’s has been a growing expectation that the BOJ could alter, or even abandon, their YCC (yield curve control) target at today’s meeting. The yen began to strengthen after the SNB surprised markets with a 50-bps hike – when few were expecting a hike at all. With central banks fighting inflation in unison it piles pressure on the BOJ to change policy, at least at some point. 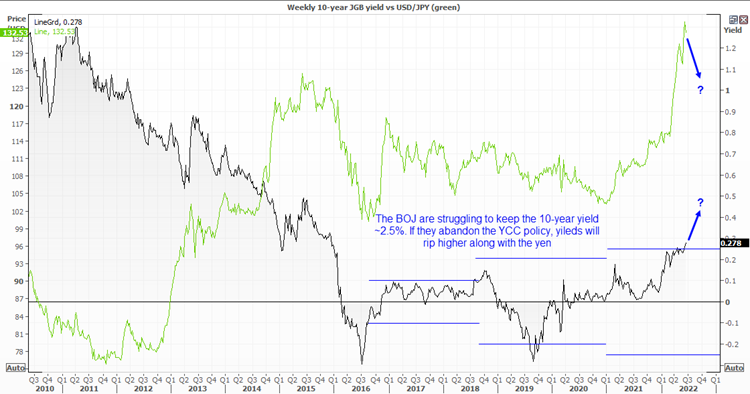 They BOJ have been trying (in vain) to keep their 10yrs bond yield ~0.25, but traders are goading them into abandoning the policy with rates now around 2.8%. Ultimately the BOJ made a choice to support their bond markets over their currency, as they can’t do both. So if they abandon YCC, expect the yen to rip higher in spectacular fashion.

Three potential scenarios to monitor at the BOJ’s policy decision If the BOJ stick to their dovish guns, it likely presents a great buying opportunity for the likes of AUD/JPY and USD/JPY, as pre-emptive traders run for cover and yield differentials come back into play. In fact, we’re already seeing USD/JPY move higher on a report from Reuters that the BOJ are expected to stand pat. Should that turn out to be incorrect, bears are likely to step back in at more favourable levels.

Ultimately, traders remain heavily net-short yen futures so this could be a white-knuckle ride if and when many of those yen bears are caught on the wrong side of the market.