Currency Pair of the Week: USD/MXN

Currency Pair of the Week: USD/MXN

Economic data from the US starts off slow this week but culminates with Non-Farm Payrolls on Friday ahead of the long 4th of July holiday weekend in the US.  Current expectations for the headline NFP are for 650,000 new jobs to have been added to the economy during June.  The Unemployment Rate is expected to drop from 5.8% to 5.7% and Average Hourly Earnings are expected to increase to 2.1% YoY from 2.0% YoY in May.  Recall that the Non-Farm Payroll data from April and May were both weaker than expected, however the Fed still had a hawkish lean at their last FOMC meeting.  In addition, the Fed will be watching to see if the recent increase in inflation has fed through to the wage increases in the form of Average Hourly Earnings.

The US infrastructure spending bill was agreed to in principle last week, with includes $579 billion in additional spending.  The spending package will include funds to build and repair roads, bridges, pipes and broadband internet.  The plan is expected to be paid for by the sales of strategic petroleum reserves, 5G spectrum auction proceeds, extending customs user fees and redirected covid funds. The bill will nor require an increase in taxes, nor does it include “human infrastructure”, such as child case and climate change.  Biden will announce a separate bill to pass human infrastructure, which he hopes to be passed via reconciliation.  Under these conditions, the Democrats in the Senate will only need a 50-50 decision, with Vice-President Kamala Harris casting the deciding vote.  President Biden said over the weekend that the infrastructure spending package will NOT be tied to a tax and spend bill.  This was clarified due to conflicting reports last week.

The Central Bank of Mexico, Banxico, surprised everyone last week by increasing interest rates from 4.00% to 4.25%.  Expectations were for unchanged. Banxico had last lowered rates in February. They had only held rates steady for 3 months before hiking.  Earlier in the year, the central bank had expected interest rates to converge at Banxico’s target of 3% towards the end of the year.  However, within inflation moving higher lately, now hovering near 6%, the target may not be feasible as originally hoped.  Therefore, Banixico hiked rates.

USD/MXN has been moving lower since putting in pandemic highs on April 6th near 25.7836.  The pair began to form lower highs, while putting in a zone of horizontal support 19.5481 and 19.80, creating a descending triangle. 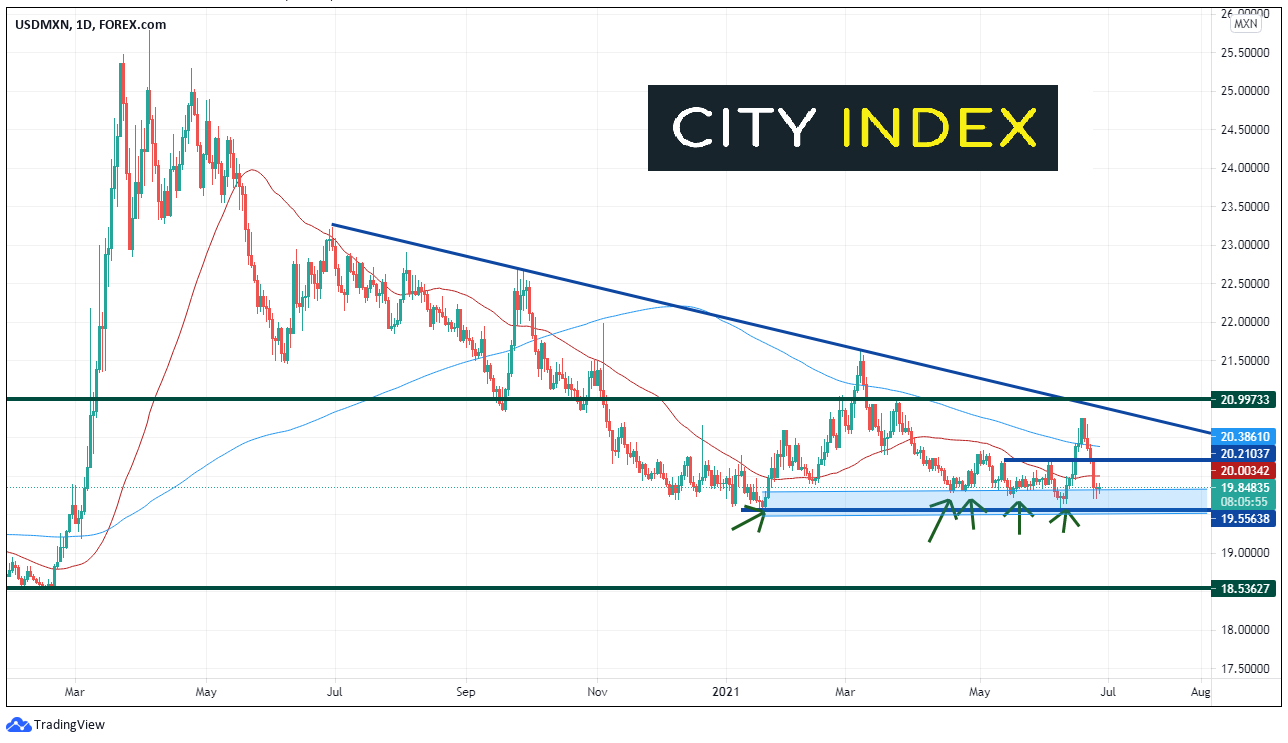 On a 240-minute timeframe, USD/MXN moved aggressively higher after the hawkish FOMC statement on June 6th, only to move aggressively lower ahead of and after the Banxico statement last week (Did someone know something?).  The pair is currently testing the support zone, trading between 19.70/19.90. If price continues lower, the bottom of the horizontal support zone is in at 19.5481.  Below there, price can fall a long way, to the pre-pandemic lows near 18.5383 (see daily).  If support holds and USD/MXN moves higher, the first level of resistance is the 50 Day Moving average, currently at 20.00 and horizontal resistance at 20.2104.  The 200 Day Moving Average is just above, currently at 20.3861, then the January 18th highs at 20.75. 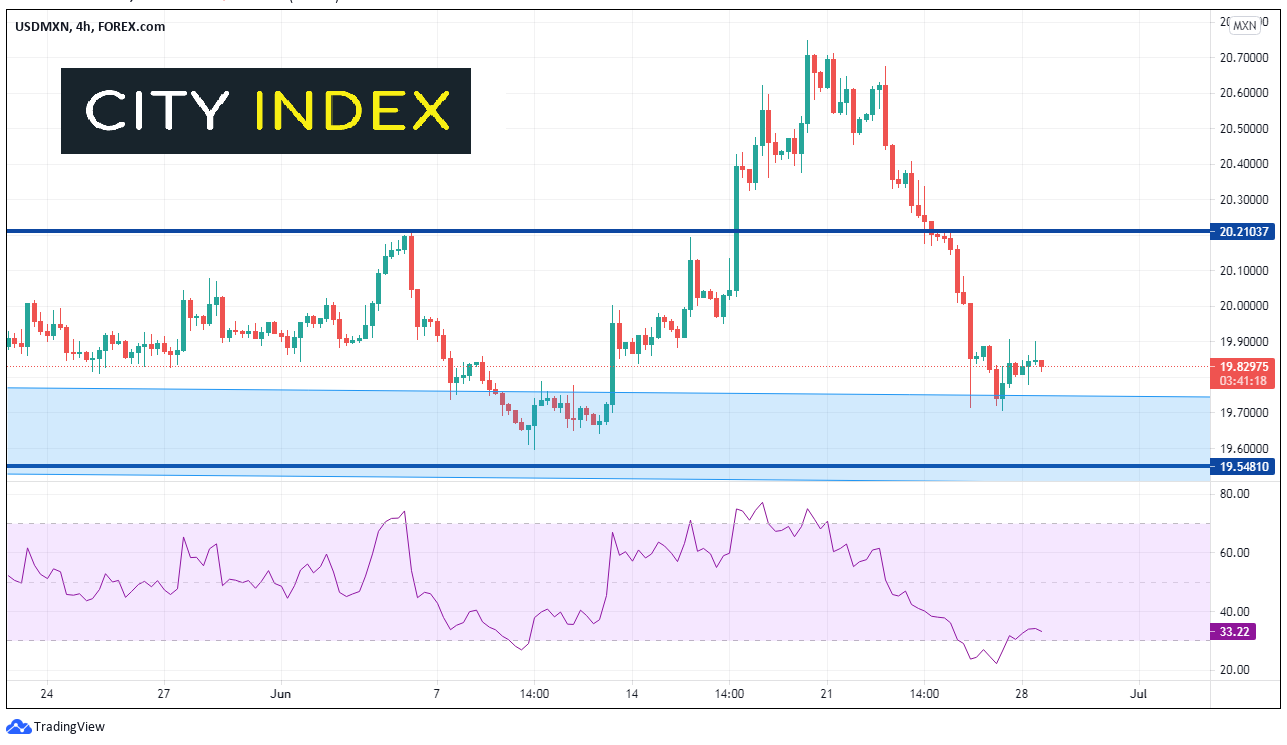 Notice that although price is once again testing an important support zone, the path of least resistance is lower.   If Banixco continues to be more hawkish than the FOMC, USD/MXN could continue lower.  And if the pair does break the support zone, it could move quite a bit to the downside!