Although a backwards looking number, the advanced look at Q1 GDP definitely raised some eyebrows.  The headline print was -1.4% QoQ vs an expectation of +1.1% QoQ and a Q4 2021 reading of +6.9% QoQ!  In addition, the Advanced GDP deflator, which is the inflation component of GDP, rose by 8% QoQ vs 7.3% QoQ expected and 7.1% QoQ in Q4 2021.  Most of the miss in the headline print was due to the record US trade deficit and a decline in inventories, even though consumer spending was strong.  In addition, it should also be noted that the Advanced Core PCE for Q1 was 5.2% QoQ vs 5.4% QoQ expected and 5% QoQ in Q4 2021.  Although the Fed’s favorite measure of inflation was lower than expected, it was still higher than that of Q4 2021.

The initial move for the DXY upon the release was to pull back.   However, with the DXY trading to 20-year highs today, the pullback may be bought into. 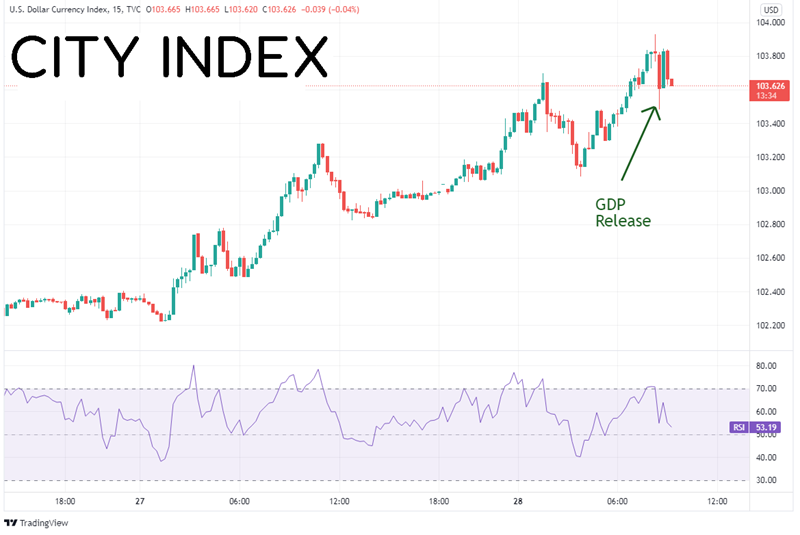 On a daily timeframe, the US Dollar Index has gone parabolic as month end approaches.  The next horizontal resistance levels aren’t until 105.41 and 109.77, which date to 2002.  First support isn’t until 101.04, followed by the April 21st lows and the top, upward sloping trendline of the recent channel near 99.82.  Below there, price can fall to the 50 Day Moving Average at 99.02.

As a result of the strong US Dollar, EUR/USD has reached its lowest level since January 2017.  The next support level isn’t until 1.0340, which is the lows of January 2017, and then the psychological round number support level at 1.0000.  First resistance is at the previous March 2020 support level of 1.0636, then then horizontal resistance and the bottom downward sloping trendline of the recent channel near 1.0761. 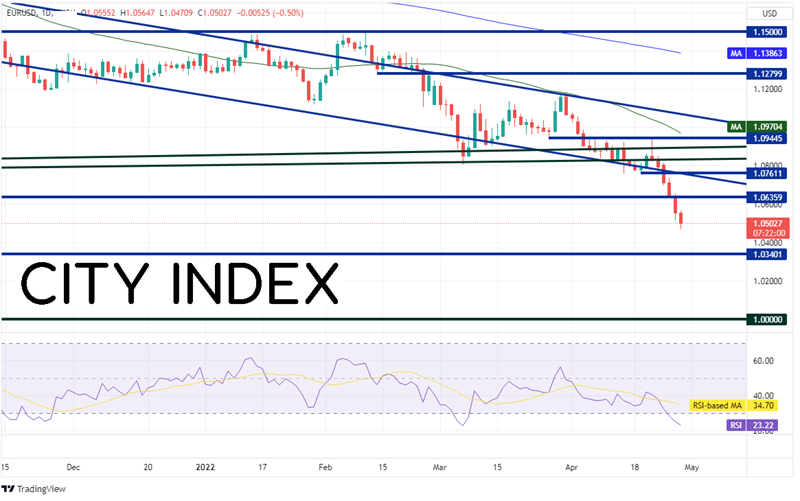 The Q1 Advanced GDP print was weaker than expected.  However, as the number is backwards looking, it may not have that much affect on the US Dollar as it continues in parabolic fashion.  Watch tomorrows Core PCE to get a better sense of where the DXY and EUR/USD may be headed after month end.