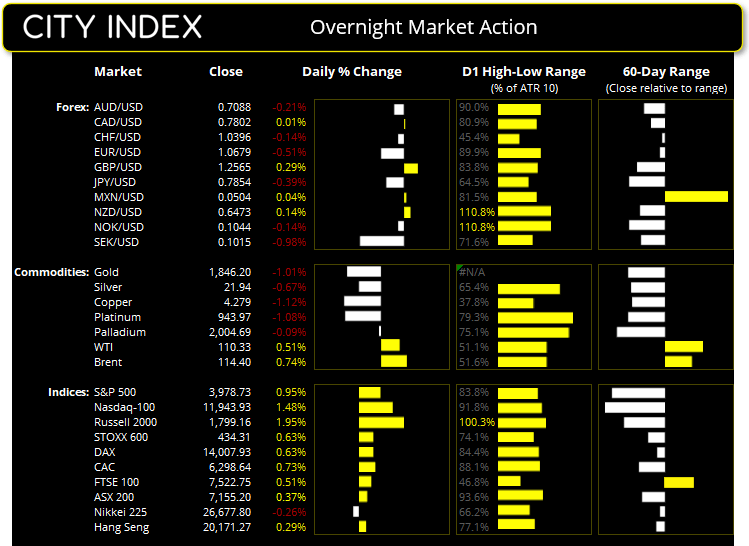 The Fed minutes have confirmed ‘most participants’ are on board to hike by 50-bps at their next two meetings. This would be their third 50-bps hike in as many meetings and take interest rates to 2% by July. With inflation risks ‘skewed to the upside’, markets are pricing in rates to finish the year at 2.75%, although only with a 58.9% probability. And that is because we’re all questioning as to whether the Fed really can tame eye-watering levels of inflation without triggering a hard landing.

The minutes also raised concerns that if inflation expectations remained elevated it would become difficult to guide inflation back down to 2%. The Fed may find themselves treading on eggshells by September, as they’re aiming to tame hot inflation whilst targeting a soft landing within a low-growth environment.

And that is going to make today’s GDP revision of great interest, after the initial release saw growth unexpectedly contract by -1.4%. The Fed will be crossing their fingers for Q1 GDP to be upwardly revised today, because another print of -1.4% or worse could exacerbate concerns of stagflation. We already heard Bostic saying this week that they may need to take a pause [from hiking rates] in September. It’s therefore interesting that the minutes stopped shy of being so confident of 50-bps hikes after July.

Remember, the Fed don’t simply announce policy U-turns. So if we hear a growing chorus of other members mentioning a potential pause around September, we know the Fed are getting cold feet. And who could blame them, with consumer confidence at multi-year lows and cracks appearing in the rendering of the housing sector.

Gains for the dollar where underwhelming, considering how hawkish the Fed are. So there may have been some short covering in there, but upside volatility was underwhelming to say the least. We expect NZD to recoup much of its lost ground after the RBNZ lifted their OCR forecast to 3.9% by the year end.

We saw the countertrend rally towards the monthly pivot point, as we suggested yesterday. And we are now keeping a close eye on its potential to move lower. Resistance has been found around the 200 and 20-bar EMA’s, and lower trendline of a descending triangle. A bearish inside candle has also formed on the 4-hour chart. Our bias is bearish below the monthly pivot point (black line) and bearish targets include the weekly S1 pivot and 126.30 triangle target. 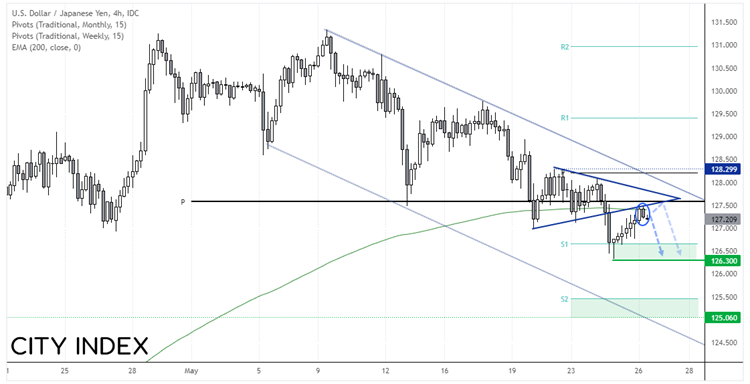 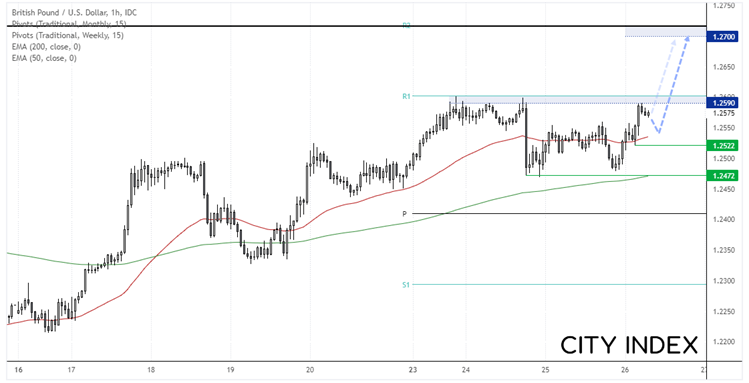 GBP/USD has been within an uptrend since the 16th of May, although the rally stalled at the 1.2600 resistance zone. Support was found around 1.2472 and bullish momentum is now increasing back into resistance. A bullish inside day formed yesterday, so we’re now looking for a breakout above 1.2605 to assume bullish continuation.

Our bias remains bullish above the 1.2522 low and for a rally to the 1.2700 resistance area. However, a small bullish flag is also forming, so perhaps we’ll see a direct breakout in the European or US session, in which case our bullish bias would be above the flag low.