Swiss CPI strong; Is the SNB ready to act?

Switzerland’s CPI reading for May was 2.9% YoY vs 2.6% YoY expected and 2.5% YoY in April. This was the highest reading since September 2008.  The main reason for the larger than expected increase was rising prices in both housing and energy.  At the last SNB meeting, held on March 24th, the central bank held interest rates at the ultra-low level of -0.75 in order to counter the upward pressure of the franc.  They also raised its 2022 inflation forecast from 1% at its December meeting to 2.1%, and to 0.9% for 2023 and 2024.  The next SNB meeting is on June 16th. Expectations are for the SNB to leave rates unchanged, despite rising inflation.  Will the central bank surprise markets and raise rates to -0.50?  At the very least, will it revise its inflation forecast higher once again?

A few days after the March SNB meeting, USD/CHF made a near-term bottom at 0.9195 on March 31st.  The pair then teamed up with the US Dollar Index, and by mid-April, the 2 assets were highly correlated, with a correlation coefficient above +0.80. A correlation coefficient reading of +1.00 is considered a perfect correlation and the two assets move in the same direction 100% of the time.  The current correlation coefficient of +0.97 is pretty close!  Between March 31st and May 16th, USD/CHF moved from 0.9195 to a near-term high of 1.0064, its highest level since May 2019.  The pair has since pulled back and is trading near the 50 Day Moving Average at 0.9590.  In addition, the pair is holding above the 61.8% Fibonacci retracement level from the March 31st low to the May 16th high, at 0.9527. 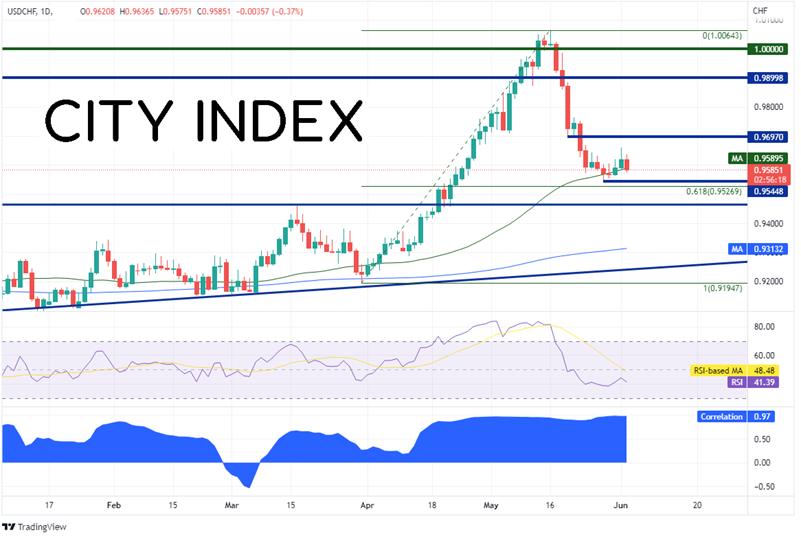 On a 240-minute timeframe, USD/CHF seems to have paused on its move lower just as the RSI began to diverge with price in oversold territory.  First support is at the low from May 27th at 0.9549 and then the previously mentioned 61.8% Fibonacci retracement level at 0.9527.  If price breaks below, the long-term horizontal support dating to July 2020 crosses at 0.9460. However, if the support holds, the first level for resistance is the high from Wednesday at 0.9658, then the horizontal resistance at 0.9697.  If price breaks above, the next resistance level is the highs from May 20th at 0.9772. 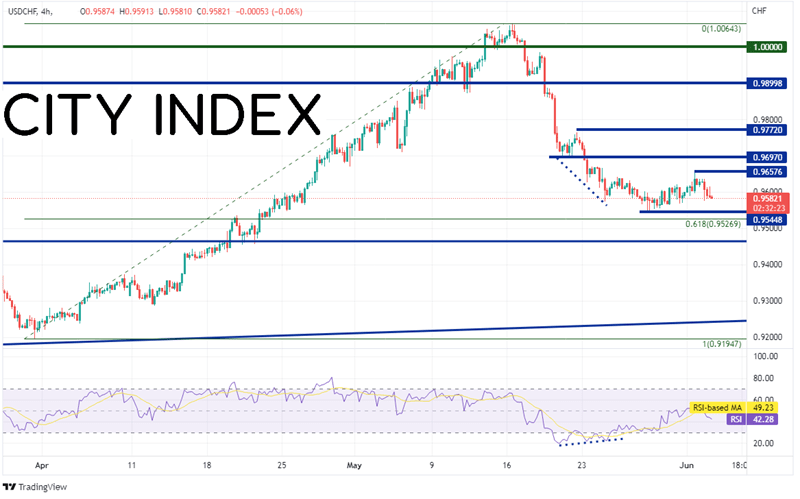 The CPI reading for Switzerland in April was 2.9% YoY, its highest level since September 2008!  Will this be enough to persuade the SNB to finally lift rates from -0.75?  With a correlation coefficient of +0.97 on the daily timeframe between the DXY and USD/CHF, it may not matter. The next direction for USD/CHF may depend on the direction of the US Dollar.