Tencent Q4 2021 preview: Where next for Tencent stock?

When will Tencent release Q4 2021 earnings?

Tencent is scheduled to publish its fourth quarter and full year results for 2021 on Wednesday March 23.

Tencent shares have halved in value since peaking just over a year ago. The regulatory overhaul of key industries such as gaming has resulted in limits being introduced on playing-time and in-game spending, while also tightening the approval process for new games to make it harder for the industry to launch new products. Meanwhile, its large online advertising unit has also suffered as businesses cut marketing budgets amid the regulatory changes and a slowdown in consumer spending. Tencent is countering this with faster growth overseas and in new high-potential areas such as cloud-computing and payments, but it hasn’t been enough to offset the challenges hitting its more established businesses in China.

But Tencent shares are trading some 25% higher than they were week ago as Chinese stocks come back onto the radar after the government pledged to stabilise financial markets following the recent rout, including a pledge to bring an end to the regulatory crackdown that has plagued the tech and internet industries. They are likely to remain volatile as markets digest the details of the Chinese government’s plan, which will be key in deciding whether the country’s digital giants are now strong recovery plays after becoming more and more uninvestable in the eyes of investors over the past year. While government intervention has been welcomed by the markets, there are still questions over how it will address the country’s wider macroeconomic issues.

With this in mind, Tencent is expected to report an 8.7% year-on-year rise in revenue in the fourth quarter to RMB145.3 billion – marking the slowest growth on record - and that basic EPS will fall over 10% to RMB3.06.

Its largest segment, Value-Added Services (VAS), is set to report 8.6% growth in sales to RMB72.7 billion. That is set to be driven by online games, with its international arm continuing to outpace growth in China, and social networks, where Tencent has been delivering ‘relatively rapid growth’ from video and music subscription services, as well as moderate growth in live streaming and digital items to be used online. Tencent is expected to have ended 2021 with 242.4 million paying subscribers. That would be 10% higher than the year before and up from 235.4 million at the end of September.

Turning to users on its messaging and social media platforms, analysts believe Tencent ended 2021 with 1,269.6 million Monthly Active Users (MAUs) across its Weixin and WeChat services compared to the 1,262.6 million it had at the end of September. Smart device MAUs on QQ will continue to decline to end the year at 569.6 million.

Online Advertising revenue is expected to be a drag on the topline with sales forecast to fall almost 5% year-on-year to RMB23.5 billion. The fall comes after growth suffered a severe slowdown in the second half of the year as some industries hardest hit by the regulatory overhaul and economic situation in China, including the gaming and education sectors, cutback on their marketing activities.

Revenue from FinTech and Business Services, which homes its smaller but faster-growing businesses, is expected to rise almost 25% year-on-year to RMB48.0 billion. Still, that would mark the third consecutive quarter of slower growth, which has largely been driven by increased commercial payment volumes and healthy growth in demand for business services as more industries continue to go digital.

For the full year, Tencent is expected to report 17% growth in revenue to RMB564.4 billion and a 4.7% rise in EPS to RMB13.28 as a stronger first half counters the tougher environment in the second.

The initial outlook for 2022 will be pivotal in deciding how markets respond to the results this week, with investors keen to discover if the problems it has suffered in 2021 will continue into 2022. Currently, analysts believe revenue growth will continue to slow and rise just 15% this year and that earnings will remain under pressure.

Where next for Tencent stock?

Tencent shares were languishing below the HKD300 mark for the first time in over three years before news that the Chinese government was set to intervene and support businesses, sending the stock markedly higher and pushing the RSI out of oversold territory.

The stock has been volatile since popping last week, although HKD370 appears to have emerged as a new floor for the stock. The first upside target is the short-term moving average at HKD438, in-line with the March-high, which will open the door to the 100-day sma at HKD452 and then the long-term moving average at HKD482, in-line with the ceiling that has limited the stock from heading higher on several occasions since the start of 2022. Beyond there, it can start to eye a recovery back above HKD500.

The fact average volumes in the last 10 days have continued to rise and was more than double the 100-day average provides strong support that the recent reversal can gain momentum. However, the RSI technically remains in bearish territory and is reinforced by the fact the 50-day sma remains below the 100-day (which in turn sits below the 200-day). The HKD370 floor needs to hold to avoid bringing the three-year low of HKD297 back into play. 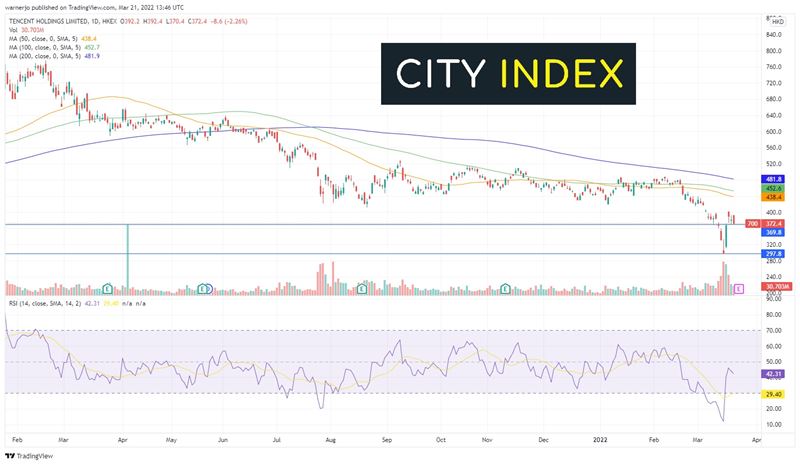 How to trade Tencent stock

You can trade Tencent shares with City Index in just four easy steps: