Netflix Q1 preview: Where next for Netflix stock?

When will Netflix report Q1 2022 earnings?

Netflix will release first quarter earnings after US markets close on Tuesday April 19.

All the attention is on growth head of Netflix’s results. The streaming giant is expected to have added just 2.5 million subscribers in the first three months of 2022. That is around 74% below pre-pandemic levels and marks a severe slowdown compared to the 8.3 million additions it reported in the previous quarter.

That means the company should have ended March with around 224.6 million subscribers in total. That will be up 8% from 207.6 million the year before and a tepid 1.3% higher than at the start of 2022. Subscriber growth is expected to have stalled in North America following a recent price hike and it is forecast to add just thousands of new users in the region. Growth is expected to remain strongest in Asia and mild in both EMEA and Latin America.

Data suggests the Netflix app was downloaded around 4 million times during the quarter, according to Bloomberg Intelligence, suggesting there is scope for Netflix to surprise the markets. However, recent price hikes and the suspension of its service in Russia following the invasion of Ukraine present some major headwinds. Competition has also intensified over the last couple of years following the launch of even more streaming services for users to choose from.

The outlook for the second quarter of 2022 will be arguably even more important in deciding how markets react to the results as they gauge how the rest of the year is shaping up. The second quarter is usually the weakest season for user growth and analysts currently believe growth will slow once again to just 2.4 million additions.

It is worth noting that while Wall Street believes Netflix will add just 4.9 million subscribers in the first half of 2022, they expect growth to accelerate in the second half when it is forecast to add 16.4 million subscribers – suggesting a lukewarm start to 2022 could be followed by a stronger finish to the year. The entire streaming industry will be put to a test this year as consumers are expected to tighten their purse-strings amid rampant inflation and the cost-of-living crisis, revealing how much value subscribers place on their Netflix account.

Wall Street forecasts revenue will rise 11% to $7.9 billion in the first quarter from $7.2 billion the year before. Diluted EPS is forecast to fall 23% to $2.89 from $3.75 the year before, when earnings more than doubled amid the surge in demand during lockdown.

The company’s margin suffered a large fall in the fourth quarter of 2021 to just 8.2% due to a bumper period for its content slate, but this is expected to start returning to more normal levels of 22.2% in the first quarter. Netflix has said this should average between 19% to 20% over 2022 as a whole, which will be down from 21% last year, although the company has recommitted to its plans to grow its margin by 300 basis points annually going forward. With that in mind, Netflix is expected to see its margin dip to 21.6% in the second quarter.

Netflix has burnt through cash for three consecutive quarters but is expected to generate $543.1 million in free cashflow in the first quarter, which would be welcomed by investors and a sign that it can continue to generate cash throughout 2022.

Investors will once again be keenly listening out for any news on potential new catalysts, such as the push into gaming. Netflix has said this will be a slow-burner but shareholders hope new initiatives like this can help diversify the business and counter any weakness in the core business. Notably, Netflix agreed last month to buy video game developer Next Games, which makes mobile and socially-driven games built around popular franchises, including Netflix’s own Stranger Things.

Netflix shares have almost halved in value since peaking last November as the rapid rate of user growth seen during the pandemic started to unwind, but there are signs that the heavy selloff has been overdone.

Notably, the RSI has risen significantly since sinking deep into oversold territory in January while the share price has managed to lose further ground. This divergence suggests the current downtrend is losing steam and that a reversal could be on the cards. That is further reinforced by the fact average trading volumes have been in consistent decline over the last 100-days.

If that proves true, we should see Netflix shares make its first sustained move above the 50-day sma, which currently sits at $377, for the first time in over four months. It can then target the $412 level of resistance seen in February before looking to close the huge gap that emerged when the stock sank lower in January. Notably, the 46 brokers that cover the stock agree that Netflix can close that gap and hit $504 over the next 12 months.

The two-year low of $330 hit last month should be treated as the initial floor for the stock. A move below there could open the door to the next downside target of $316 that acted as a tough ceiling for the stock in the second half of 2019. 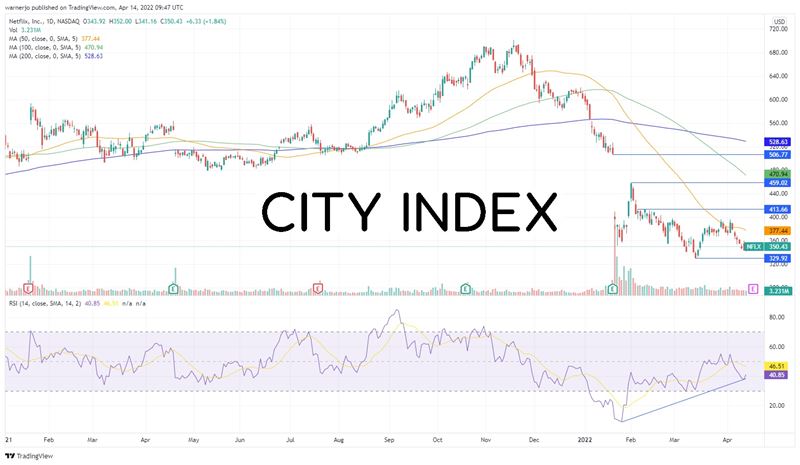