Delta Air Lines Q1 preview: Where next for DAL stock?

It was a mixed year for airlines in 2021 as they continued to suffer from the hangover left over from pandemic-induced disruption. While it was a second consecutive year of losses for the industry, a recovery got underway in the second half of the year and this has continued in early 2022, although they are now facing an array of new challenges this year.

Demand for travel remains well below pre-pandemic levels. Delta Air Lines has said capacity will only be running at 83% to 85% of 2019-levels in the first quarter.

More intense competition has also impacted pricing, which is set to lead to revenue coming in at just 72% to 76% of pre-pandemic levels. Wall Street forecasts that Delta Air Lines will report adjusted operating revenue of $8.3 billion. That will be more than double the $3.6 billion booked the year before but broadly in-line with what has been delivered in the last two quarters.

Lower fares come at a time when airlines are grappling with rising costs, including for fuel following a rise in oil prices since the conflict in Ukraine started. Delta Air Lines said it will be paying $2.35 to $2.50 a gallon of fuel in the first quarter compared to $2.09 in the last three months of 2021. Although demand is expected to have continued to improve as international travel restrictions continue to fall away, profitability is set to come under strain as costs outpace fares.

Labour costs are also on the rise and are expected to hit $2.7 billion in the first quarter, around 14.5% higher than pre-pandemic levels and 0.6% higher than the previous quarter, according to numbers from Bloomberg. Airlines are currently scrambling to hire workers in what is proving to be a tight labour market in order to ensure they have the staff they need to meet the anticipated rise in demand this year, with Delta Air Lines aiming to hire 4,500 new flight attendants alone before the end of 2022. The airline said it was raising pay by around 4% for around 75,000 workers last month, although this did not apply to pilots.

Delta Air Lines proudly stated that it was the ‘the only major US airline to deliver profitability across the second half’ of 2021 – having reported two consecutive quarters of positive adjusted diluted EPS, but analysts believe this will come to an end in the first three months of 2022 with consensus figures pointing toward a loss of $1.24. That will be better than the $3.55 loss posted the year before. CEO Ed Bastian said he did expect the company to be profitable in March, signalling that things are improving as we have entered the second quarter of 2022.

The outlook for this summer will be under the spotlight, as this will be the key season that will decide how successful a year 2022 will be for the industry. Delta Air Lines said in January that it was ‘confident in a strong spring and summer travel season with significant pent-up demand for consumer and business travel’, and followed that up in March that it is confident of turning a profit this year. That is supported by Wall Street’s view, which is expecting Delta Air Lines to report a 58% surge in revenue and escape the red in 2022.

There are reasons to be optimistic about this year, but also to be cautious. Just this morning, Delta Air Lines announced it is suspending all flights from the US to Shanghai until the end of April because of fresh Covid-19 restrictions being put into place across China, which is sticking to its zero-tolerance approach to the virus.

Research from AirDNA released last month suggested there has been a strong uptick in bookings on platforms like Vrbo, Hopper and KAYAK as consumers prepare for spring and summer travel. The report said the booking pace for travel in the northern hemisphere this spring was 49% higher than last year and 26% higher than before the pandemic hit.

Barclays said in a research note last week that it was expecting a meaningful and sustainable recovery in demand in the second quarter of 2022. It said it expects improvement in off-peak demand as business travel continues to recover at a slower rate. It believes pricing will improve as a result, although ongoing Covid-19 disruption, rising costs and the Ukraine war all remain significant headwinds.

Airlines are expected to become more aggressive when it comes to passing through rising costs to consumers this year, but it could end up being a tough balancing act between protecting profitability and keeping prices low enough to stir-up demand, especially as consumers become more cost-conscious amid the cost of living crisis.

Where next for DAL stock?

Delta Air Lines shares have been gradually trending lower over the last six months, forming a series of lower highs and lower lows.

The 200-day moving average, which currently sits at $40, has proven to be a reliable ceiling for the stock over the past nine months, with shares only having briefly stayed above this level. The latest uptrend stalled upon hitting the 200-day sma and a sustained move above here is needed to install confidence that it can find higher ground. A break above $45 – the peak of the previous uptrend – is needed to break the current pattern. In the meantime, the stock is likely to continue to flip-flop above and below the 50-day and 100-day moving averages that have currently converged at $38.50.

Notably, the 27 brokers that cover the stock believe Delta Air Lines can rebound to over $50 within the next 12 months, some 50% higher than the current share price and at a level not seen in over a year.

If the current pattern holds and $40 does prove to be the peak of the latest uptrend, then we could see the stock slide back toward the low of the last downtrend at $30. This too needs to hold as a floor if the 9-month downtrend is to end and to avoid the door being opened to the next key level of support closer to $27. 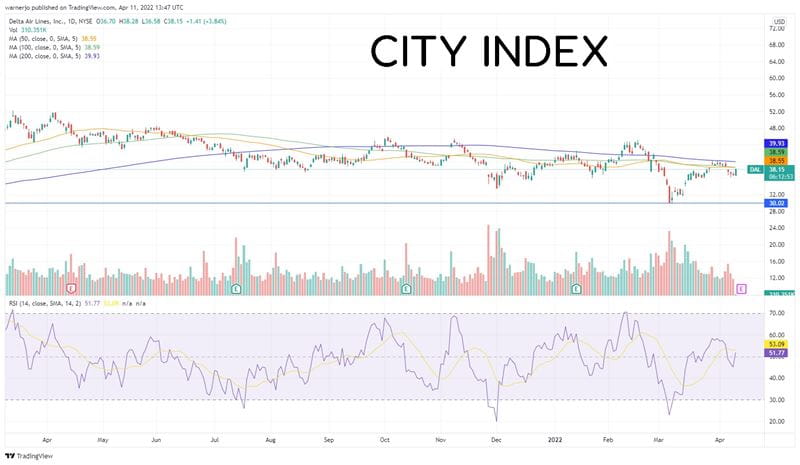 How to trade Delta Airlines stock