Boeing Q1 preview: Where next for BA stock?

When will Boeing release Q1 2022 earnings?

Boeing’s fourth quarter update released last January rounded-off another challenging period for the company, seeing it post its third consecutive annual loss as Covid-19 and problems plaguing some of its models continued to weigh on the business.

We already know that Boeing delivered 95 commercial aircraft in the first quarter of 2022, up from the 77 it delivered in the same period the year before but down from the 99 shipped in the final three months of 2021.

A rise in the number of 737 Max deliveries and an improvement from its services division amid the recovery seen in the airline industry this year is expected to see its operating margin return positive in the first quarter at 4.1%, having collapsed to -28.2% in the previous quarter. That would be a welcome improvement considering its margin has remained negative in all but two quarters since the start of the pandemic.

Boeing managed to generate positive operating cashflow for the first time in almost three years when it released its last set of results, but this is not expected to have been sustained in the first quarter of 2022, with analysts forecasting the company will report an operating cash outflow of $2.6 billion in the first quarter. This will weigh on the company’s cash balance, grinding it down to $6.5 billion from over $8.0 billion at the end of 2021, according to consensus figures.

With that in mind, investors are hoping that burdensome costs related to the ongoing saga as it tries to fix its 787 planes will unravel in 2022, having cost the company $5.5 billion in the fourth quarter of 2021 alone. This has not only incurred significant costs but also prevented the company from shipping them to customers, weighing on delivery figures and cashflow.

Investors had been hoping that Boeing would start delivering its 787 planes again in the first quarter, but that didn’t materialise. Shareholders are likely to push for a new timeline of when they will resume as this is key to Boeing escaping the red and improving cashflow, but management have so far said that things can’t be rushed as they continue to negotiate with regulators to allay safety fears. Getting 787s back into the sky will also be key in reviving demand in China, which has proven to be far stricter on Boeing’s aviation safety than other nations.

Notably, markets believe Boeing can return to profit at the EPS level for the first time in a year in the second quarter and that earnings can more than double for a second consecutive year in 2022 as the airline and travel industry rebounds following the heavy disruption caused by the pandemic and Boeing’s production-related problems fade away.

Where next for BA stock?

Boeing shares have been stuck in a downtrend for over a year, forming a series of lower-highs and lower-lows, although the fact it has recently found a floor above the bottom of the last leg at $173 provides some confidence. 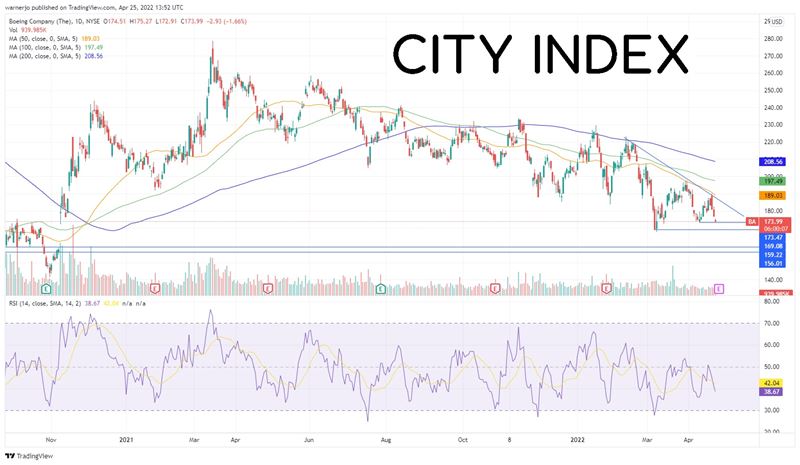 How to trade Boeing stock

You can trade Boeing shares with City Index in just four easy steps: