S&P 500: What’s driving the rally in indices and have we seen THE bottom?

As any experienced trader will tell you, the COVID pandemic-driven bear market of 2020 was highly unusual: seemingly all at once, “everyone” across the globe realized that economic activity would grind to a halt, creating an instantaneous global recession. Thankfully, that “everyone” also included governments and central bankers, and they acted aggressively to support individuals and businesses, leading to a sharp but ultimately short-lived bear market in most risk assets.

In contrast, the current market environment is more in-line with traditional bear markets of the past; that is to say, over the last nine months traders only gradually came around to the “stickiness” of inflation (the outbreak of a war in Ukraine certainly didn’t help!) and the associated need for higher interest rates from central banks, leading to deteriorating financial conditions. However, even in the midst of a bear market, risk assets never head exclusively in one direction; instead they oscillate between moments of optimism that the worst may be behind us and deep pessimism that the situation will never improve.

As you may have noticed, we’ve been in more of the former environment over the past month. Traders reached peak despondency following the Federal Reserve’s mid-June meeting, when the central bank surprised markets with a larger-than-expected 75bps interest rate increase in mid-June (and hinted at the potential for even more aggressive rate hikes).

Now, on the eve of another FOMC meeting, market-based interest rates have fallen sharply, with the benchmark 10-year US Treasury yield dropping from nearly 3.50% to around 2.75% today as traders price in outright interest rate cuts from the Federal Reserve as soon as the first quarter of next year. It’s this factor more than any other that has led to the current rally in global equity indices and risk appetite more broadly: In essence, traders are betting that mild recession will be enough to nip inflationary pressures in the bud while simultaneously prompting the Fed and other central banks to return to a more accommodative policy heading into 2023.

Time will tell, but it’s worth noting the above scenario lays out a very specific set of circumstances to work out for the bulls. Inflation would have to peak and start receding rapidly…without the global economy falling into a deep recession; simultaneously, central bankers would have to immediately recognize that inflation has peaked and pause/reverse rate hikes in relatively short order over the next few quarters in time for the looser financial conditions to (re)stimulate the economy before corporate earnings fall sharply from lower demand.

Looking at the price action in the S&P 500 (US SP 500), there’s nothing yet to suggest that this year’s bear market has ended. As the chart below shows, the index has so far seen a 10% rally off its intraday lows, almost perfectly at the average of the 9%, 13%, and 10% counter-trend rallies we’ve seen so far this year, while the daily RSI has (thus far) failed to reach “overbought” territory (>70): 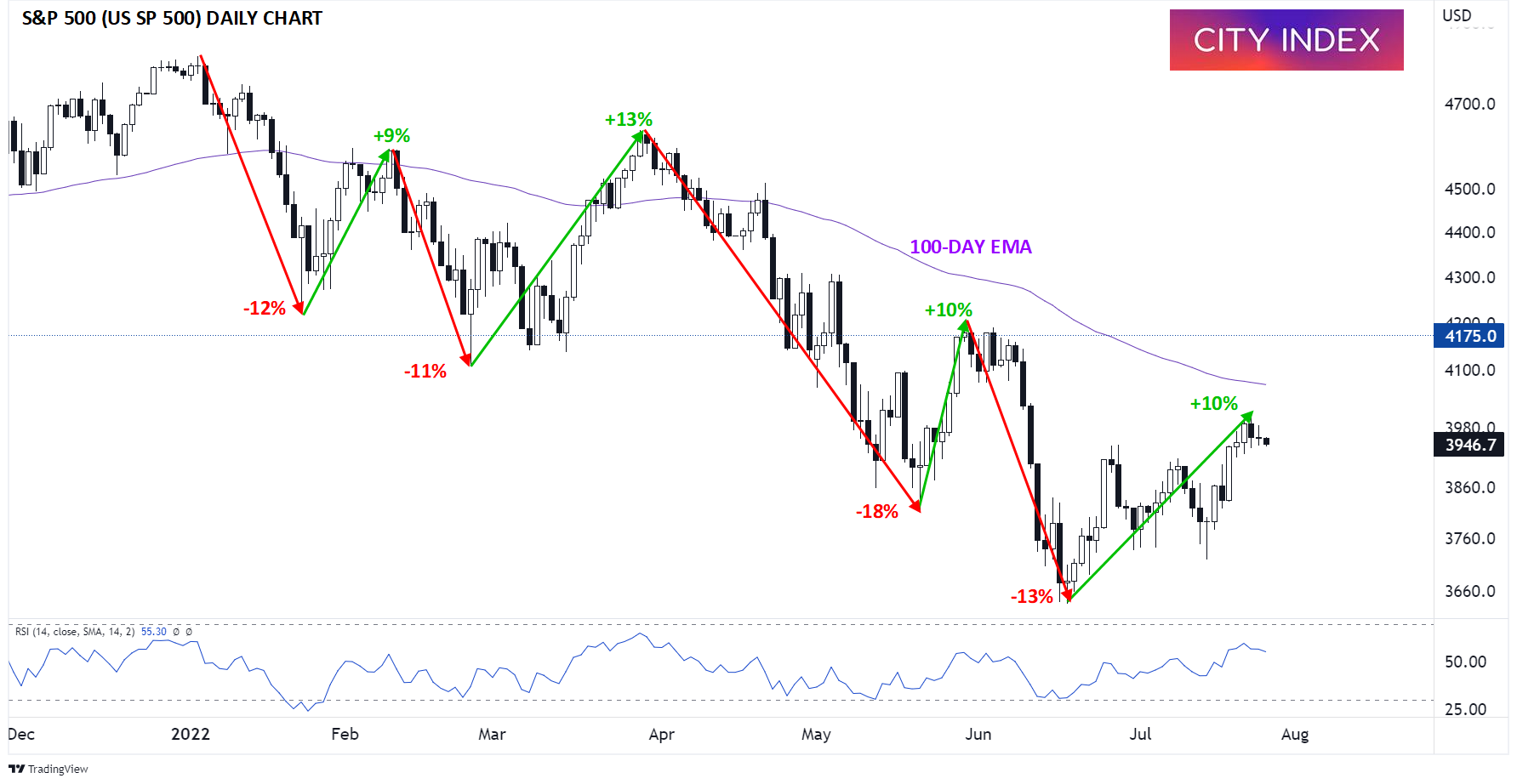 It’s certainly possible that equity indices like the S&P 500 have seen THE bottom for this cycle, but with traders pricing in a rosy resolution to the current quandary of elevated inflation and slowing growth, readers may want to treat the current rally with skepticism unless/until major indices can gain a foothold above their 100-day EMAs (currently at 4070 for the S&P 500) at a minimum.