We’ve noticed an interesting technical setup on USD/SGD, although with the FOMC meeting just hours away it could be a make or break moment for the setup.

The Singapore dollar is a tightly controlled currency, and its direction and strength is controlled by the MAS (Monetary Authority of Singapore). They opt to control their currency to control inflation over interest rates, and we can see in the chart below that they have guided the strength of their currency higher whilst inflation has continued to overshoot. The NEER is a weighted basket of currencies which is not publicly divulged, but we can at least assume that USD/SGD would be trading much higher were it not for the rising NEER. 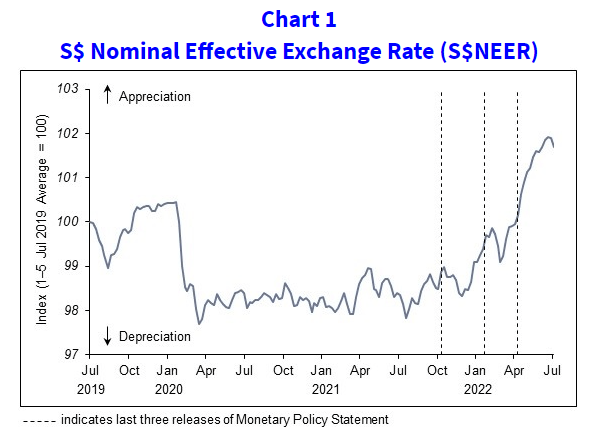 The MAS expect growth for key trading partners to slow significantly in H2, and Singapore’s growth is expected to moderate further in 2023. Inflationary pressures are expected to remain elevated in the months ahead, which could send core CPI above 4% before pulling back – although upside risks to inflation remain. This means the MAS are likely to retain an upwards trending NEER in a controlled manner. But whilst the Fed continue to hike rates aggressively, it leaves the potential for further gains on USD/SGD. 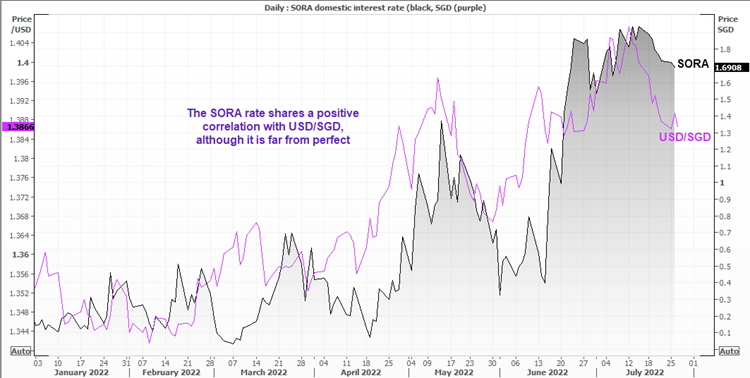 As mentioned, the MAS don’t target interest rates – but we have noted a positive correlation between USD/SGD and the SORA (Singapore overnight domestic average) interest rate. The SORA is a volume-weighted average rate of borrowing transactions in the unsecured overnight interbank SGD cash market in Singapore. Both the SORA and USD/SGD topped around the 2nd week of July but, on a relative basis, USD/SGD has seen a deeper pullback. Assuming the SORA rate remains elevated it could provide another pillar of support for USD/SGD. 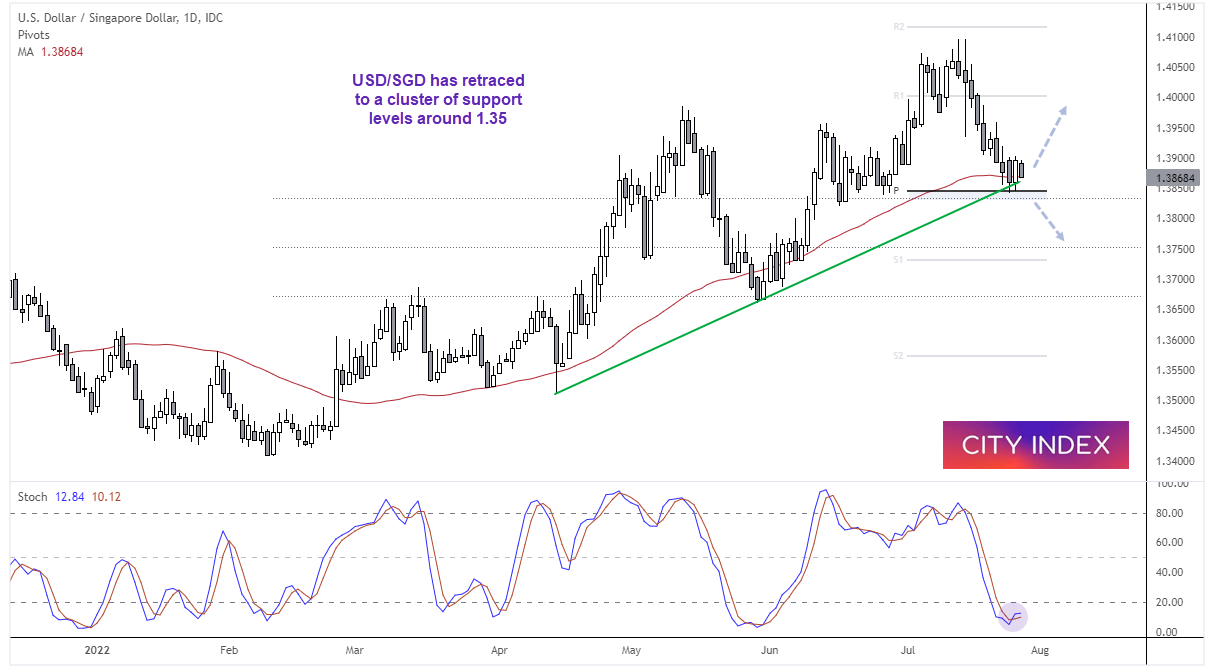 The daily chart of USD/SGD remains in an established uptrend, although the pair has retraced towards a cluster of support around 1.3835/50. This week’s low has respected the monthly pivot point and bullish trendline, prices are meandering around the 50-day eMA and the 38.2% Fibonacci ratio is nearby. Furthermore, the stochastic oscillator has generated a buy signa in the overbought zone. From a purely technical standpoint is appears ripe for a swing low to form and continue its trend higher. And a 100-bp hike today could potentially help with that scenario. Conversely, should momentum turn lower then a break beneath the support zone sends a clear warnings that all is not well with this trend, and brings the 1.3750 support zone into focus.

Keep in mind that we are just hours away from another historic FOMC meeting, where markets are currently favouring another 75-bp hike. But there is ~25% chance of a 100-bp hike, and that doesn’t appear to have been priced into the dollar given it has retraced from its cycle highs. Either way, volatility can be expected and traders would be wise to tread carefully, or step aside until after the meeting.