NZD/USD could awaken from its torpor on RBNZ, Chinese data

Markets remain snore-inducingly slow as we move into the latter portion of today’s US session. That said, traders may want to start looking ahead to some of the noteworthy data on tap in the coming Asian session.

First, shortly after this note goes to press, the RBNZ will release its semi-annual Financial Stability Report. Back at the last release in May, the New Zealand’s central bank keyed in on three major risks to the NZ economy: the housing market, dairy prices, and global financial conditions. Unfortunately, none of these factors have improved notably over the last 180 days, so we would expect a similar focus in today’s release.

The RBNZ has also used this report, and Governor Wheeler’s accompanying press conference, to jawbone the kiwi lower in the past, so traders should be wary of any comments about the currency as well. Looking to the chart, the key areas of support to watch will be the Fibonacci retracements of the mid-September to mid-October rally at .6490 (61.8%) and .6380 (78.6%) 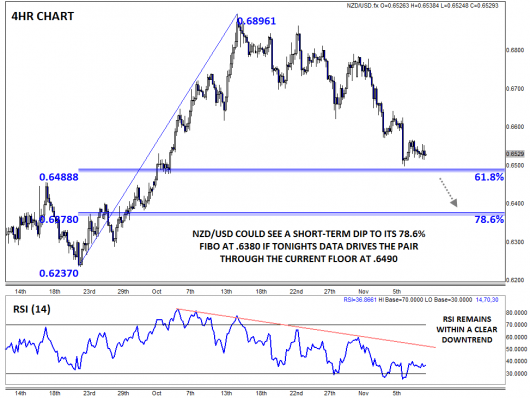 Across the Tasman, Australia’s Westpac bank will release the latest data on AU consumer sentiment. This report covers data from the current month, so it provides a timely view into the psyche of the Australian consumer. Unfortunately, the data tends to be extremely volatile on a month-by-month basis, so it’s impact on markets may be limited, even in the current data-starved environment.

Finally, traders will also get the latest update on the world’s second-largest economy, China. Specifically, China will release its latest industrial production and fixed asset investment data, which are critical reports for the manufacturing-led economy. Expectations are for the former report to tick up to a 5.8% y/y growth rate (from 5.7%) and the latter release to edge down to a 10.2% y/y gain (against 10.3% last month). If the data fails to live up to these still lofty expectations, more weakness is possible in both the Australian and New Zealand dollars, regardless of the domestic data.