The September Non-Farm Payroll report will be released tomorrow at 8:30 ET (12:30 GMT, 1:30pm BST), with expectations centered on a headline print of 202k after last month’s muddy 173k reading. My model suggests that the report could slightly exceed these expectations,with leading indicators suggesting a September headline NFP reading of 219K.

The model has been historically reliable, showing a correlation coefficient of 0.90 with the unrevised NFP headline figure dating back to 2001 (1.0 would show a perfect 100% correlation). As always, readers should note that past results are not necessarily indicative of future results. 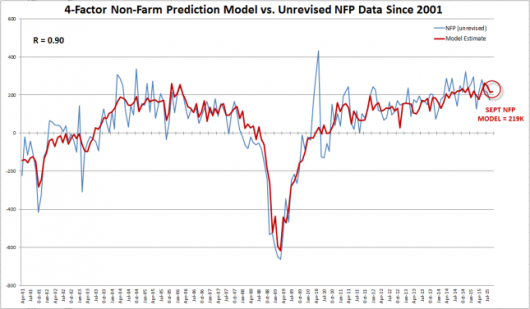 Compared to last month, the leading indicators for the non-farm payrolls report are mixed. Bulls will latch on to the improvement in the ADP employment report (from 190k to 200k) and initial jobless claims in the survey week (down from 277k to a historically low 267k). However, we also saw a notable deterioration in the Manufacturing PMI employment component, which dropped to 50.5, on the precipice of dropping below the boom/bust line at 50. Unfortunately, the ISM Services report, which is usually seen as one of the strongest leading indicators for NFP, will not be released until next week.

With the Federal Reserve punting on its decision to raise interest rates until (likely) December, this NFP report may be less impactful than most, as few market participants expect the central bank to act at its October meeting. That said, dollar bulls still want to see strong growth in the labor market, whereas equity traders may prefer the potential for more low interest rates that a weaker report could bring. Three possible scenarios for this month’s NFP report, along with the likely market reaction, are shown below:

As always, traders should monitor both the overall quantity of jobs created as well as the quality of those jobs. To that end, the change in average hourly earnings could be just as critical as the headline jobs figure. Last month’s report provided a perfect example of this phenomenon, when the relatively strong 0.3% rise in wages offset the slight disappointment in total jobs. Another 0.3%+ increase in wages would go a long way toward alleviating the Fed’s near-term concerns about inflation.

Historically, USD/JPY has one of the most reliable reactions to payrolls data, so traders with a strong bias on the outcome of the report may want to consider trading that pair.

Though this type of model can provide an objective, data-driven forecast for the NFP report, experienced traders know that the U.S. labor market is notoriously difficult to predict and that all forecasts should be taken with a grain of salt. As always, tomorrow’s report may come in far above or below my model’s projection, so it’s absolutely essential to use stop losses and proper risk management in case we see an unexpected move. Finally, readers should note that stop loss orders may not necessarily limit losses in fast-moving markets.