The central-bank-induced, white-knuckle thrill ride reached its climax over the last 16 hours. Overnight, the RBNZ opted to cut interest rates to 2.75% as widely expected, and the central bank also cut its forecasts for growth and inflation, implying that another cut is possible later this year. While much of this dovishness was already priced in, NZD/USD is still hovering near its six-year low under the .6300 handle.

Earlier this morning, the Bank of England brought its “Super Thursday” festivities to the market by releasing both the outcome of its most recent monetary policy meeting and the minutes from last month’s meeting at the same time. On balance, the latest update from the BOE was dovish, though not as dovish as expected. The central bank made no changes to monetary policy, with only Ian McCafferty dissenting in favor of an immediate 25bps hike. In addition, policymakers chose to cut its forecast for GDP growth slightly, from 0.7% down to 0.6%, though this decision was generally priced in already.

Shifting gears to the more detailed minutes from the last meeting, the BOE expressed concerns that inflation could eventually overshoot the bank’s 2% target, though it was likely to remain near zero for the next few months. The minutes also cited improving productivity and “healthy domestic expansion” as factors offsetting downside risks to the global economy (read: China slowdown). In sum, the BOE still seems to be on track for an interest rate hike early next year, assuming inflation picks up as expected.

On balance, traders were cautiously optimistic on the pound after today’s top-tier releases. GBP/USD spiked all the way up to nearly 1.5450 in the immediate aftermath, but the unit has since faded back to trade near the mid-week range around 1.5400.

It’s worth noting that the 38.2% Fibonacci retracement of the late August swoon comes in around 1.5415, so bulls will likely remain cautious unless we see a confirmed close above that area. With the secondary indicators improving, but still auguring for caution, traders may want to hold off until they see where GBP/USD finishes the day (and the week) before committing to strongly to the long or short side. 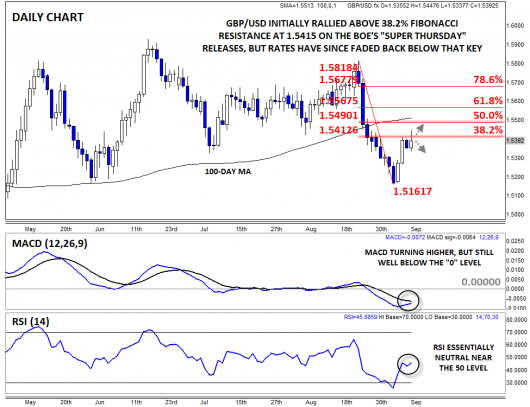 Central banks current monetary policy - Where to next?
By:
Joe Perry CMT