FOMC meeting preview: Taper so close, yet so far away

FOMC meeting preview: Taper so close, yet so far away

When the Fed last met back in the halcyon days of mid-June, US COVID cases were averaging “just” about 12K per day, mask mandates were getting relaxed, and everyone was looking forward to a strong recovery through the summer.

What a difference six weeks can make!

Now, US COVID cases have nearly quadrupled to more than 50K per day, policymakers are considering expanding economic restrictions on health concerns, and some states are seeing their emergency rooms overrun with sick patients for (at least) the third time in the past 18 months.

Against this backdrop, the Federal Reserve is likely to strike a dovish tone, noting that it will continue to aggressively support the economy as needed until it reaches full employment or inflation sustainably exceeds the its 2% target.

Below, we highlight the two key areas of focus for this Fed meeting:

Since the last FOMC meeting, we’ve seen the US Consumer Price Index (CPI) measure of inflation spike to 5.4% y/y, well above the Fed’s target, though much of the increase was due to likely temporary factors like supply chain disruptions and travel/lodging costs. Even the Fed’s preferred inflation measure, Core Personal Consumption Expenditures (PCE), rose by 3.4% in May. While Fed Chairman Jerome Powell is likely to stick to the script that these price increases are “transitory,” these explanations may soon start to lose their efficacy if inflation remains elevated (or even accelerates from here).

At the last meeting, Powell noted that the US is “experiencing a big uptick in inflation, bigger than many expected … and we’re trying to understand whether it’s something that will pass through fairly quickly or whether, in fact, we need to act”. He went on to add that the economy is “not going to be going into a period of high inflation for a long period of time … we have tools to address that”. Expect Powell to face some tough questions about how the Fed would react if price pressures fail to recede as anticipated.

For months, traders have been focused on the late August Jackson Hole summit of central bankers as a likely time for Chairman Jerome Powell to announce the Fed’s tapering plan, though with COVID resurging, August now looks like the absolute earliest potential time for a tapering announcement, with the Fed meetings in September or November now looking increasingly likely. Regardless, Fed officials have repeatedly noted that they plan on signaling that tapering is coming “well in advance,” a phrase that the central bank last used in 2017 ahead of its balance sheet runoff. That time, the phrasing meant two meetings before the event, suggesting that the central bank may hint at tapering in August or September ahead of a formal start closer to December.

With the ECB seemingly at least couple months behind the Fed in terms of “normalizing” monetary policy, EUR/USD could see some interesting price action around this week’s FOMC meeting. The world’s most widely-traded currency pair has been grinding its way gradually lower over the last month, forming a well-defined bearish channel over that period. That said, the pair has formed a triple bullish divergence with its 14-day RSI over that period, signaling that the selling pressure has been waning on each additional foray lower: 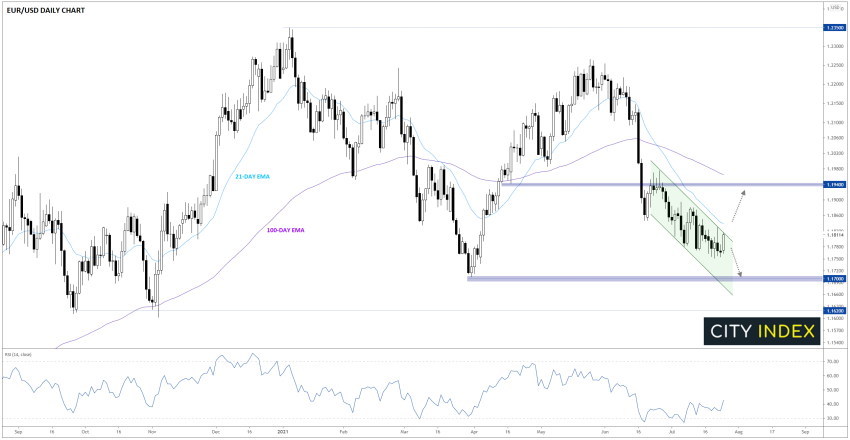 If Jerome Powell and company strike an even more dovish note than expected, EUR/USD could rally through its 21-day EMA back toward the 100-day EMA above 1.1900. Meanwhile, a more hawkish press conference and statement could keep the bearish trend intact for a potential test of the multi-month lows near 1.1700.