Brexit trade version 2.0 kicks off with a whimper

Article 50 happened with more of a whimper than a bang. Although the pound initially rallied it has since backed off its highs as the market gets to grip with Theresa May’s letter to Donald Tusk and the EU’s response. Essentially both sides were polite to each other, which helped to keep volatility supressed and price action fairly muted. Hence the range in GBP/USD was only 100 pips for this historic event.

The FTSE 100 reached its lows of the day as Brexit talks were formally kicked off, however after falling to a low of 7,313, it has managed to claw back some losses. We continue to believe that UK stocks could be vulnerable during this next phase of the Brexit process. So far on Wednesday house builders are some of the weakest performers in the FTSE 100, after multiple reports were released about how Brexit could impact the UK property market, particularly the high end market in London and the South East. This highlights the sensitivity of the UK stock market to Brexit-related headlines, and we expect this to continue over the coming weeks and months.

Although Theresa May struck a notably conciliatory tone in her letter to Tusk, she didn’t hold back on her plans for an ambitious deal, and added that she will push for a free trade deal with the EU for the UK’s all- important financial services sector. This is not going to be easy as there is a lot of opposition to London remaining Europe’s financial hub once Brexit happens. This has been reflected in the continued weak performance of the FTSE 100’s financial sector, which is currently down 0.2%, and didn’t react to the specific mention from the British PM. Insurance companies are leading the financial sector lower, as these companies could be particularly hard hit if the UK fails to strike a deal to allow passporting rights across Europe. The financial sector could have had an even deeper decline on Wednesday were it not for 3i, which has led the FTSE 100 today, after Morgan Stanley increased its rating on the stock to overweight.

As we move into the actual process of leaving the EU, the equity market is likely to be sensitive to any hint about how the various sectors of the FTSE will be effected. With virtually all companies on the FTSE 100 connected to Europe in some way, it will be hard to see how this index will escape unscathed from the Brexit process, especially if the tone to the negotiations starts to deteriorate. The market knows that the hard work starts here, thus, we could see some more FTSE 100 under-performance in the coming days and weeks.

GBP: backing away from Article 50 highs as concerns remain

The pound has continued to pull back from its intra-day high vs. the dollar at 1.2476 this afternoon. The outlook for GBP/USD has dimmed in recent sessions as the spread between UK and US 10-year yields has once again turned south after staging a recent recovery. This yield spread tends to move closely with GBP/USD, and at these levels it is hard to see how the pound can meaningfully rally. The pound fared slightly better versus the euro today, but it also lost ground vs. the single currency this afternoon. We continue to think that 0.8550-90 – a key sma support zone- can limit the downside for EURGBP in the near-term. While we think that the bulk of GBP selling has already happened, and acknowledge that GBP short positioning is at extreme levels, sterling could still experience bouts of weakness as Brexit negotiations begin to take place.

Overall, we are moving to a new phase of Brexit as the UK and EU hash out the detail of the divorce plans. As mentioned above, this could potentially impact every sector and company in the FTSE 100, which, in our view, leaves UK stocks more vulnerable to losses compared to the pound over the coming months. 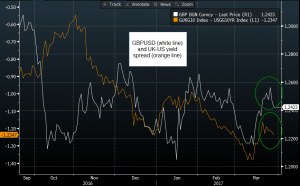