Bank of Canada Preview: To taper or not to taper

Bank of Canada Preview: To taper or not to taper

The Bank of Canada meets on Wednesday this week.  Expectations are mixed.  We know that they will leave interest rates unchanged at 0.25%.  However, when the central bank last met on April 21st, the BOC adjusted the net amount of Canadian bonds they would buy per week from C$4 billion down to C$3 billion.  In other words, they “tapered” bond purchases.  They noted that GDP for Q1 appeared to be stronger than they had anticipated, and revised GDP higher for 2021 from 4% to 6.5%.  They also said they expect a bounce in inflation; however, they expect it to ease back to below 2% in the second half of 2021.  The  question now is “Will they taper again this week?”

Learn more about the Bank of Canada

Canada’s economic data has been mixed.  March Retail Sales were stronger than expected (although releasing March data in May wont help much for the BOC’s decision making).  April CPI was stronger than expected for both the headline and the core figure, at 3.4% and 2.3%, respectively. And housing prices were also strong.  The BOC is concerned about a growing housing bubble in Canada.  And obviously Crude Oil prices have been on the rise.  The higher price of oil brings with it a higher level of the Canadian Dollar.  In addition, BOC Governor Macklem said recently that tapering was the right thing to do for the economy.

On the other hand, manufacturing data for April was weaker.  Since the last meeting , Canada released two months of employment data.  For April, expectations were for -175,000, while the actual print was -207,100.  In May, the expectation was for -20,000, while the actual print was -68,000.  In addition, Q1 GDP may not have come in as hot as the BOC initially though back in April.  The Annualized GDP Growth Rate for Q1 was 5.6% vs 7.1% expected.   Also, Ontario is still under restrictions, though they are expected to be lifted this week.   There may be a large pickup in the June jobs report, but that’s a month away.  The report will be released on July 9th.

With the ECB and the BOC meeting this week, our Currency Pair of the Week was EUR/CAD.  However, the US releases CPI this week, so USD/CAD could be on the move as well.  We put this chart of USD/CAD out 1 week ago, and nothing has changed, except that price has moved closed to the apex of the triangle: 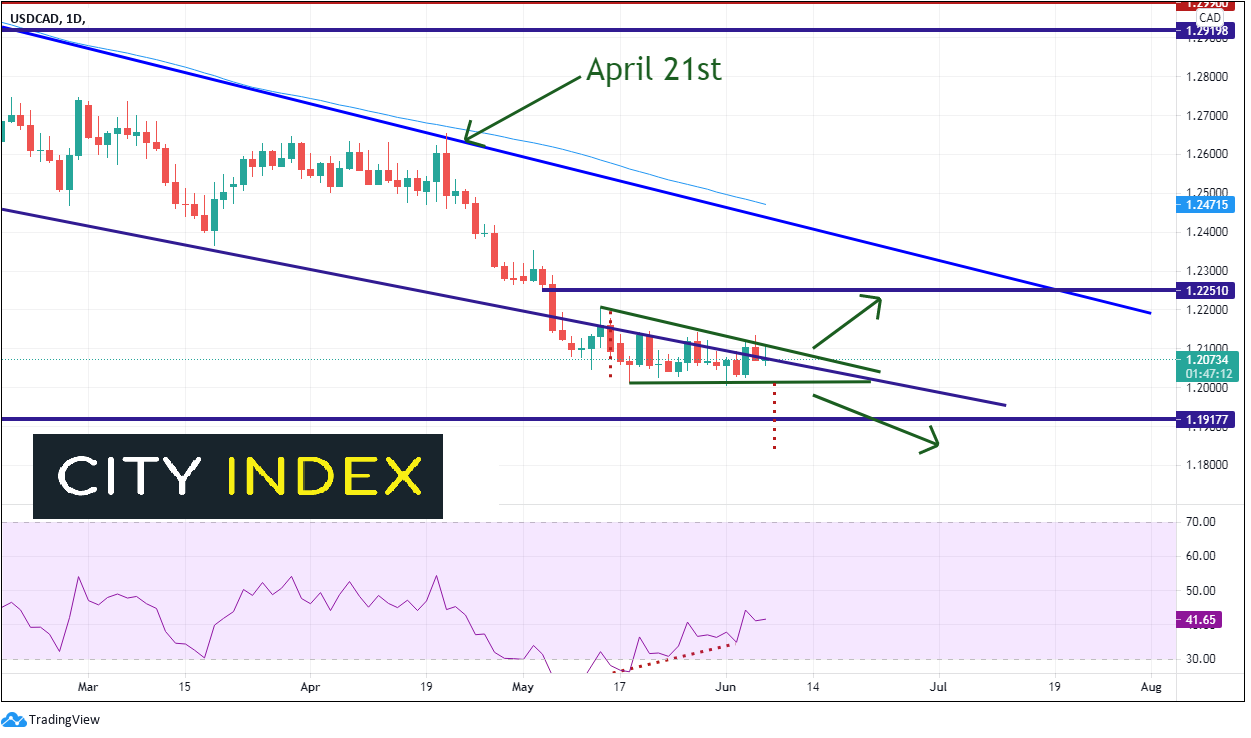 On April 21st, when the BOC announced they were going to reduce bond purchases, USD/CAD began moving aggressively lower after piercing through a falling trendline.  By mid-May however, price began moving sideways and is currently forming a descending triangle.  Expectations are that price will move lower out of the triangle but expect possible profit-taking (buying USD/CAD) ahead of the BOC meeting from those who have been short USD/CAD since the last meeting.  If the BOC does taper on Wednesday, watch for the possibility of a sharp, volatile USD/CAD move lower.  Horizontal support is at 1.2006 and 1.1917.  Below there, price can fall to 1.1464 (May 2015 lows).  If USD/CAD moves higher, first resistance is at the top, downward sloping trendline of the short-term triangle near 1.2106, then horizontal resistance at 1.2250.  The longer-term, downward sloping trendline crosses above there near 1.2425.