Apple’s biggest acquisitions: what does Apple own?

How did Apple become the largest company in the world?

The company was started in 1977 by Ronald Gerald Wayne, Stephen G. Wozniak and Steven Paul Jobs. Wayne initially had 10% of the stock, but he backed out of the deal in just 12 days – selling his holding for $500. Had Wayne held onto his stake, this would’ve been worth $72 billion over 40 years later.

Wozniak and Jobs went on to sell the first Apple computer – the Apple I – for $500 each via a deal with Byte Shop in Mountain View. Sales of the devices created such huge growth rates that the two were able to go on to design its predecessor. The Apple II was considered revolutionary for both the industry and Apple’s growth: sales jumped from $7.8 million in 1978 to $177 million in 1980, the year Apple listed its stock.

Both Job’s and Wozniak left Apple in the early 1980s to go on to other projects. Jobs founded a company called NeXT Software and bought Pixar Animations. But plans Jobs had put in place before his departure continued to boost Apple’s market share and by 1987, Apple stock was trading at $79. This led to Apple’s first stock split, with subsequent splits in 1987, 2000, 2005, 2014 and most recently in 2020.

Throughout the 1990s, Apple's share price started to decline. It wasn’t until 1997, when Apple acquired Job’s business NeXT and hired Jobs back as CEO, that the company returned to its growth trajectory.

Since then, Apple has been a pioneer in the computer industry. It now has five main products: iPhones, Macs, iPads, accessories and services. The iPhone is, by far, its most profitable product line, raking in $137.8 billion in sales for the 2020 fiscal year.

What companies does Apple own?

Apple owns approximately 114 companies with an approximate value of $8 billion. A lot of companies that Apple has bought are smaller technology firms that it incorporates into its own products, rather than letting the brand continue to operate independently. For example, Israeli 3D sensing company PrimeSense was the innovation behind Apple’s FaceID.

Apple’s biggest acquisition to date was its acquisition of Beats Electronics. The transaction saw Apple take ownership of both Beat’s subscription streaming service and electronics division that creates its famous headphones, speakers and audio software.

Apple’s acquisition history shows its clear trajectory from a computer company to a mobile-focused business and more recently a services platform with the likes of Apple Music and Apple TV.

According to Apple’s CEO Tim Cook, Apple has acquired more than 100 companies in the last six years. He told shareholders in the company’s AGM in February 2021, that it’s about three or four companies per week. 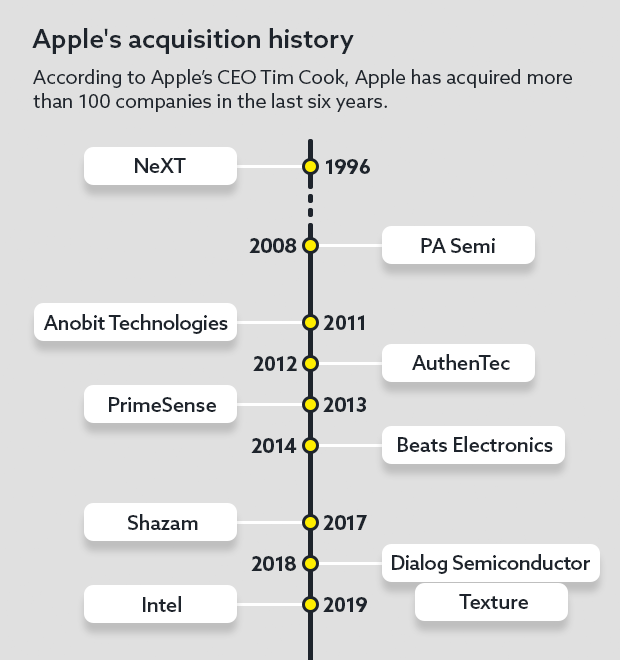 How to trade shares with City Index

You can trade Apple, and over 4,500+ global shares with us in just four steps: