NFP preview: Will the jobs report seal a 75bps hike from the Fed?

Last month’s NFP report blew expectations out of the water, showing more than half a million jobs created (the highest in five months) and average hourly earnings rising 0.5% month-over-month. In the handful of weeks since that release, Federal Reserve policymakers have uniformly spoken out against the dangers of declaring the fight on inflation over, and traders have taken note, driving expectations for another 75bps interest rate increase from the central bank above 70%.

With some ambiguity about the Fed’s imminent policy decision still lingering, this month’s jobs report could be either the proverbial nail in the coffin that all but confirms a 75bps hike or just the latest confusing economic report that tips the Fed’s decision back to a coinflip. To put it lightly, the stakes are high for traders, regardless of their favored market. For the August NFP report, consensus expectations are for 295K net new jobs and average hourly earnings projected to rise by 0.4% month-over-month: 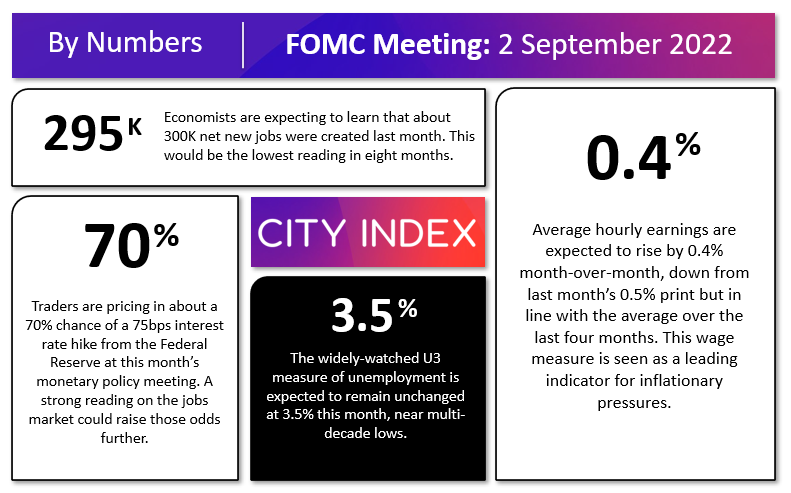 Are the expectations for NFP justified? We dive into the key leading indicators for Friday’s critical jobs report below!

As regular readers know, we focus on four historically reliable leading indicators to help handicap each month’s NFP report, and this month, the ADP Employment report returns after a two-month hiatus with a new formulation. Unfortunately, the ISM Services PMI report won’t be released until next week, but the three leading indicators we have in hand are painting a generally downbeat outlook for employment this month:

As a reminder, the state of the US labor market remains more uncertain and volatile than usual as it emerges from the unprecedented disruption of the COVID pandemic. That said, weighing the data and our internal models, the leading indicators point to a slightly below-expectations reading in this month’s NFP report, with headline job growth potentially coming in somewhere in the 200-300K range, albeit with a bigger band of uncertainty than ever given the current global backdrop.

Regardless, the month-to-month fluctuations in this report are notoriously difficult to predict, so we wouldn’t put too much stock into any forecasts (including ours). As always, the other aspects of the release, prominently including the closely-watched average hourly earnings figure which came in at 0.5% m/m in the most recent NFP report.

The US dollar index rallied through the latter half of August on expectations of a more hawkish Federal Reserve, and it is retesting its 20-year highs above 109.00 as we go to press. The world’s reserve currency has spent the last week and a half consolidating in a tight range around that level, signaling that traders are awaiting clarity on the Fed’s interest rate decision in less than two weeks’ time. Given the longer-term uptrend, our technical bias is tilted toward more strength in the greenback in the wake of the NFP report.

As for potential trade setups, readers may want to consider USD/JPY buy opportunities on a stronger-than-expected jobs report. The pair’s bullish trend has been one of the defining developments of the year in the FX market, and after spending the last three months consolidating in the 130s, rates may be ready for their next leg higher if the US economy appears poised to further outperform the rest of the world.

On the other hand, a soft jobs report could present a short-term buy opportunity in GBP/USD. While the trend is inarguably in favor of the bears, rates are deeply oversold, so a weak reading on the US economy could prompt a bounce back above 1.17 in sterling. The expected clarity in the wake of next week’s UK Conservative leadership election, which will set the country’s next Prime Minister, could also be a bullish catalyst for the island nation.