Google’s biggest acquisitions: what does Google own?

How did Google become one of the largest companies in the world?

Google held its IPO on August 19 2004 but at the time, the company was a relative unknown. The internet – let alone the concept of a search engine – was still in its relative infancy. At the time of its IPO, Google shares were worth $85 a piece.

Now, 17 years and 232 acquisitions later, Google is not only the world’s largest search engine but it’s synonymous with search engine itself. Nobody looks something up on the internet, they Google it. But the company is also far more than its internet empire. These acquisitions have taken Google into industries such as advertising, hardware and many more. To account for its growing areas of interest, in 2015, Google changed its name to Alphabet.

Under the new parent company, Google became a subsidiary, usually referred to as the search-and-services segment of earnings. This ‘core bets’ part of the business is comprised of Google, Android, YouTube and Google Cloud. The rest of Alphabet’s business is called ‘other bets’ and spans industries such as Fiber broadband (Access), artificial intelligence (DeepMind), startup investments (Google Ventures), smart homes (Nest) and ‘moon shot’ projects under the Google X wing, such as self-driving cars (Waymo), delivery drones (Wing) and robots (Boston Dynamics).

What companies does Google own?

Google owns approximately 232 companies for a total cost of about $20.89 billion. A lot of the businesses Google has acquired were all for their tech. What Google can’t do internally, it buys and incorporates into its own operations. The companies Google has acquired span industries such as social platforms, advertising and cybersecurity.

Google’s biggest acquisition to date is Motorola Mobility, which it bought for $12.5 billion but was later sold to Lenovo for just a quarter of the price ($2.9 billion). Of Google’s current holdings, the largest acquisition deal was Nest for $3.2 billion.

Google’s acquisition history has seen it buy a lot of big names and build on an already impressive empire. And it doesn’t look like there’s any sign of its M&As slowing down either. However, a lot of Google’s most recent acquisitions remain fairly private – so far in 2021, Google has acquired Pring and Dysonics but both deal amounts remain undisclosed. 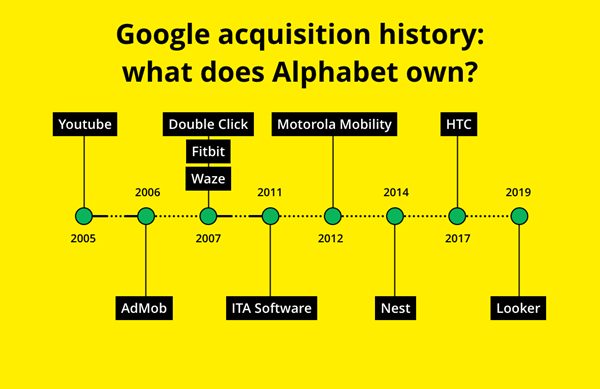 How to trade shares with City Index

You can trade Google, and over 4,500+ global shares with us in just four steps:

Alternatively, if you're not ready to trade live markets, you can open a demo account and practise trading in a risk-free environment.

View more
Week Ahead: More CB intervention? Plus, RBA, RBNZ, OPEC+, and NFP
US Core PCE follows EU CPI higher
Earnings This Week: Tilray, Tesco and Wetherspoons
US open: Stocks fall after strong data supports a hawkish Fed
Forex Friday: It is all about the pound
Reddit stocks: what meme stocks are trending?