Boohoo Q1 preview: Where next for the Boohoo share price?

When will Boohoo release its Q1 trading update?

Boohoo is scheduled to release a trading update that will provide insight into how it has performed during the first quarter that covers the three months to the end of May.

The trading update will concentrate on the topline and analysts are looking for revenue of £478.2 million in the quarter, which would be down from the £486.1 million reported the year before, according to consensus numbers taken from Bloomberg.

Boohoo shares have fallen over 10% since it released annual results in early May, when it posted its first drop in earnings since it went public back in 2014. Sales growth slowed as they continued to normalise following the pandemic-induced boom seen in recent years, while earnings and profitability continued to come under pressure thanks to rising costs, longer delivery times and elevated return rates.

These trends that emerged in the second half of the last financial year are expected to have continued in the first quarter of the new year, and this one could be the toughest update that markets will have to swallow over the next 12 months. The online fashion retailer warned early last month that sales would be down year-on-year in the first quarter as tough comparatives and the uncertain outlook for consumer spending weigh on its topline.

Markets will be keen to know how Boohoo feels about its prospects during the rest of the financial year given the rapidly changing environment.

Boohoo has said it is expecting sales to return to growth in the second quarter. Analysts currently believe second quarter sales will rise 4.3% year-on-year to £510.8 million. If achieved, that will mean sales in the first half will be broadly flat from last year, but Boohoo is still hoping to deliver this year and has said it expects things to improve in the second half. Analysts currently believe sales can grow by around 3.3% this financial year and that its adjusted Ebitda margin could struggle to rebound given the tough environment with the consensus pointing toward just 5.3%.

Notably, while Boohoo’s core operations in the UK continue to power ahead, its international performance could be held back until its new warehouse capacity comes online. Boohoo plans to open a new US distribution site in the 2024 financial year, which it has said will ‘transform’ its delivery proposition, while this financial year will see it automate its warehouse in Sheffield to improve efficiency. Its focus on capacity means it will have the ability to handle up to £4 billion in annual net sales – over double what was delivered in the last financial year.

Boohoo’s top priority this year is retaining the significant market share gains it made during the pandemic, when shoppers shifted online while stuck at home. But it believes it needs to keep prices low to keep its consumers as they tighten their belts, particularly as Boohoo is mostly geared toward younger people in their 20s. Boohoo has said it is doing what it can to offset this by improving efficiency in the hopes of minimising the amount of higher costs it has to pass on to customers. With this in mind, Boohoo usually provides gross margin figures in its quarterly updates and analysts are looking for a margin of 52.7% in the first three months of the year, down from 55% the year before.

Boohoo’s original guidance for this financial year was to deliver low single-digit growth in revenue and adjusted Ebitda margin of 4% to 7%. That range compares to the 6.3% margin delivered last year, when it dropped from above 10% as a spike in shipping costs and greater investment into its newer brands weighed on profitability.

Over the longer-term, Boohoo is aiming to deliver annual sales growth of around 25% per year once things normalise, given how the pandemic and supply chain disruption have impacted the business in recent years. Its goal is to get its adjusted Ebitda margin back above 10%.

Boohoo shares have traded within a range between 63p to 100p over the past four months, and the six-year low of 63.32p remains firmly in play. A fall below here could see the stock fall toward the 59p level of resistance seen back in mid-2016, with the next key downside target beyond there sat at the 51.50p level of support seen around the same time.

The RSI has sank further into bearish territory during June and trading volumes have risen over the past five trading sessions back toward the 100-day average, supporting the view that Boohoo shares could come under further pressure in the short-term. 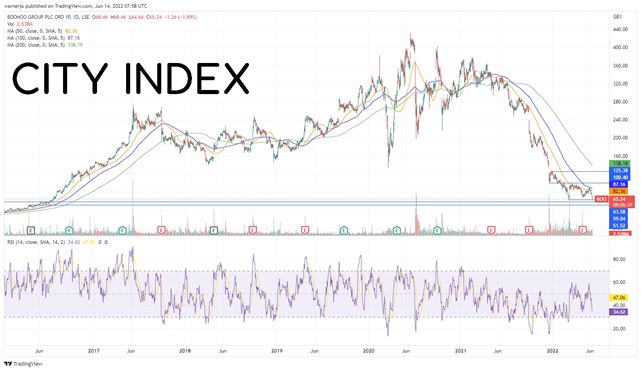 Or you can try out your trading strategy risk-free by signing up for our Demo Trading Account.
Related tags: Trade Ideas Technical Analysis earnings Earnings season Stocks Shares market Equities