As consumption accounts for around 70% of the US economy, data points such as retail sales garner a lot of attention from traders and of course the Federal Reserve.

And as the US economy contracted unexpectedly by -1.4% in Q1, it came as quite a relief that April’s retail sales figures beat expectations yesterday. Retail sales rose 0.9% in April (0.6% expected) and data for March was upwardly revised to 1.4%. Motor vehicles and parts, which accounted for 37.5% of the broad data set rose 2.2%, whilst core retail sale rose 1%. Industrial production also rose to a 6-month high of 1.1%, so these provide hope that GDP in Q2 won’t contract.

However, let’s not lose sight of the fact that retail sales have diminished over the past three months, even if it did surprise to the upside yesterday. Auto and parts – which accounted for 37.5% of the data set was also the largest contributor, and we need to question how often consumers will buy cars going forward. 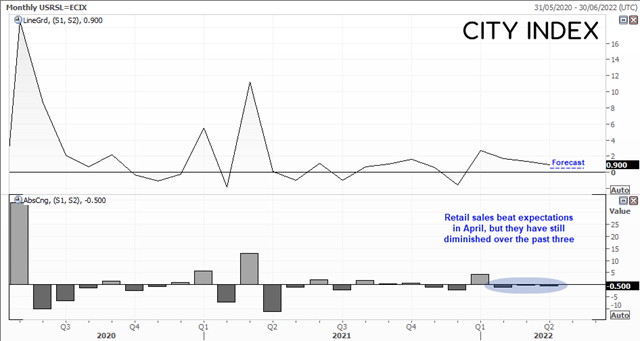 Whilst retail sales beat, we’re not out of the bearish woods yet

Perhaps consumers are indeed bringing forward their purchases as they know interest rates and inflation will be higher, and that could explain why retail sales are outperforming for now. Inflation expectations remain at multiyear highs, along with prices paid by companies. Servicing debts (such as credit cards) will become more expensive as the Fed hike. And whilst supply chain bottlenecks are beginning to ease, we don’t know how long it will take for supply chains to be restored to their former ‘well-greased’ selves. Besides, the war in Ukraine and lockdowns across China provide new sources of inflation, which means the Fed will have to be more aggressive if they cannot tame inflation (which negates growth). Ultimately, as nice as yesterday’s data was for Q2 GDP, the US economy is not out of the bearish woods yet.

It does however provide a reprieve for Wall Street, which faced continued selling pressure due to concerns of stagflation. And another positive headline for investors to mull over is that Liu He (China’s Vice Premier and closest economic advisor to Xi Jinping) told industry executives yesterday that China must “support the platform economy”. Otherwise known as the technology sector.

By Friday’s close, the Nasdaq 100 had fallen for six consecutive weeks – a bearish sequence not seen since late 2012. But it closed with a bullish hammer which perfectly respected the 50% retracement between its all-time high (ATH) and March 2020 low. Given it also held above its 200-week eMA, we strongly suspect a period of mean reversion is now due.

Whether it will be the beginning of a large countertrend bounce (or bear market rally) or lame attempt to lift itself from its lows remains to be seen. So we’ll focus on the shorter timeframes over the near-term. 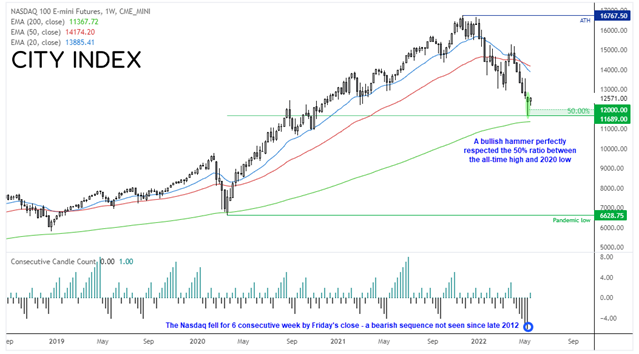 A potential reversal pattern is forming on the four-hour chart called an inverse hand and shoulders. It projects a target around 13,376, although 13,200 also makes a viable target near the 200-bar eMA. Prices have made a minor attempt to break the neckline around 12.558 but it lacks conviction in the Asian hours. We would therefore like to see a break above 12,710 before gaining confidence a breakout has occurred.

Out bias remains bullish above 12,219 (RS), and we’d still be interested in considering long setups above this level, should prices retrace towards it instead of breaking higher from the reversal pattern. 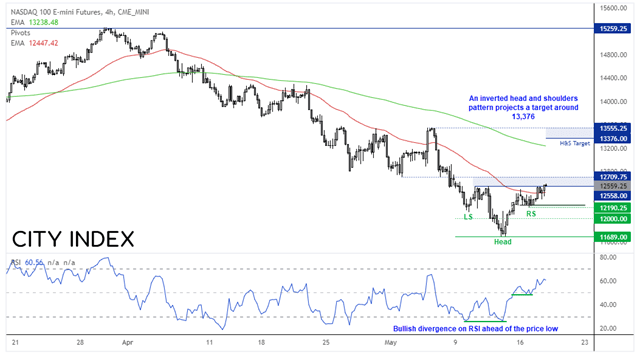