By :
Fiona Cincotta
,  Market Analyst
US stocks pared losses towards the close after strong US data balanced out the darkening trade dispute mood. On the one hand, Beijing hardening its rhetoric towards the US following Washington’s treatment of Huawei, boosted risk aversion in early trade. Riskier assets such as equities took a battering, whilst safe haven such as the yen and US treasuries were on the rise. On the other, US consumer confidence was the strongest since 2004

The markets have spent the past week jumping from headline to headline trying to assess the probability of the US and China eventually putting an end to the trade dispute. China’s comments today that they have no interest in continuing trade talks, for now, makes progress towards any sort of trade agreement very difficult.


US Consumer confidence soars
US consumer confidence rode to the rescue this afternoon, patching up sentiment, pulling European stocks off their lows and helping Wall Street perform a quick U-turn. US consumer confidence jumped to a 15-year as the gauge of current conditions improved. University of Michigan sentiment rose to 102.4 in May, well ahead of the 97.2 forecast as consumers viewed the outlook for the US economy more favourably.


Let’s not forget that this impressive consumer confidence reading comes after a stellar GDP reading of 3.2% for the first quarter and the lowest rate of unemployment in almost 5 decades. With data showing that the US economy is holding up well, surely its just a matter of time until inflation starts to move higher. Investors are starting to pare back their expectations of the Fed cutting rates by the end of the year and are once again pricing in the prospect of a more hawkish Fed.


S&P to eek out a weekly gain?
The S&P pared earlier losses to move higher, putting it on track for a higher finish on the day and possibly scraping a higher finish across the week. After falling 2.4% at the start of the week, the S&P has slowly been clawing those losses back.
Whether the index will remain in positive territory will depend heavily on trade headlines over the weekend. Any suggestions that trade talks could be back on and the S&P could push higher back towards its record high of 2954 reached earlier this month. 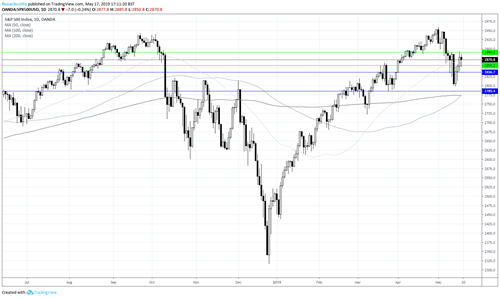