Stocks Dive As China Strikes Back

By :
Fiona Cincotta
,  Market Analyst
Any optimism that had existed on Friday for a quick resolution to the US – Sino trade dispute had evaporated by Monday. Global stocks across the board dropped lower as China hit back and as investors fretted over the economic implications of the escalating US -Chinese trade spat.

Sentiment had been low all morning after Trump threatened China not to retaliate to the tariff increases. Risk aversion intensified when China announced that it will raise tariffs on US goods as from the first June. Riskier assets such as equities tanked, US treasury bonds jumped and flows into the safe haven yen increased. These developments come after the latest round of US -Sino trade talks concluded on Friday in stalemate with no plans for further negotiations.


The speed at which this trade spat has ramped again has caught the markets off guard. The Dow fell over 500 points on the open whilst the Nasdaq dropped 2.8%, as investors price in the potential fallout of the trade dispute. China targeted some of the biggest exporters from the US – Caterpillar, Boeing, Intel Corp.


With Trump now threatening 25% tariffs on all Chinese imports the impact on Chinese exports and the Chinese economy would be substantial. There is potential for the situation to get worse before it gets better. The markets would want to see an improved tone from Trump in order to stage some sort of recovery and given Trump’s unpredictable nature, the timing of that could be difficult to gauge. 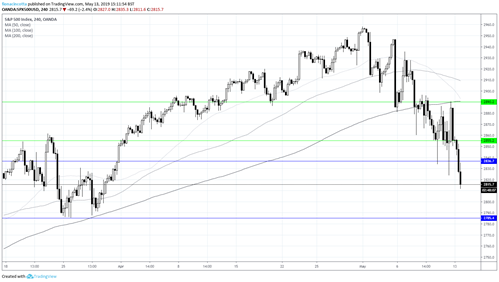