Already-weak oil prices took another knock today as the Wall Street Journal reported that the OPEC+ will be discussing the possibility of increasing production by 500 thousand barrels per day at their December 4 meeting. Both Brent and WTI slumped by more than 5% each to reach new lows for the quarter after breaking their respective troughs made in September.

My first reaction to this yet-to-be confirmed headline was: ‘well, this is quite strange.’ Not least because oil prices have just last week plunged by about 10 per cent. The OPEC might argue that it is worried that the EU’s looming embargo on Russian oil may cause a shortage in global supplies, so a responsible custodian of the oil market it is doing the right thing. But there might be more to it than just that. For example, do you find it strange that the US government has just days ago granted immunity to Saudi crown prince Mohammed bin Salman, shielding him from prosecution for the murder of US citizen and Saudi political dissident Jamal Khashoggi? If I scratch your back, will you scratch mine? “Absolutely,” seems to be the answer by the Saudi government, by the looks of things.

Anyway, if the WSJ report is confirmed, be prepared for oil prices to fall even further in the weeks ahead, because the market is already worried about falling demand as a result of a less mobile Chinese economy amid fears there will be more Covid-related lockdowns.

At the start of the quarter, the OPEC+ had agreed to reduce production by 2 million barrels a day, so this would represent yet another policy shift whether or not there’s any political angle to it.

As a result of the WSJ report and demand concerns about China, WTI has just broken its previous low at $76.16 and thereby opening the way for a potential drop to $75 handle. Previously, we were expecting WTI to breach $80 handle after it had broken out of its triangle consolidation pattern to the downside. 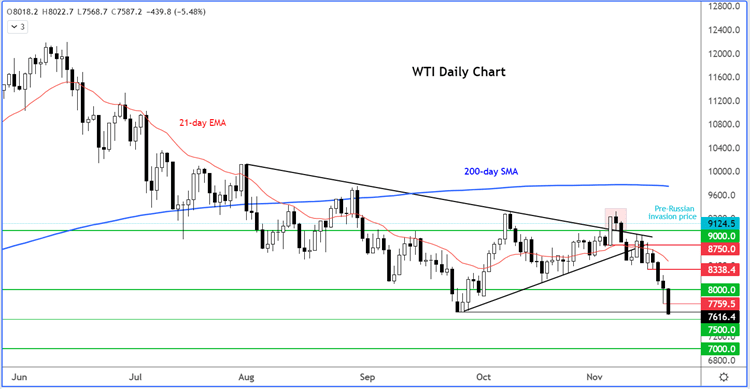