The FOMC today hiked rates 25bps to 0.50% , as expected, by a vote of 8-1.  St Louis Fed President Bullard was the sole dissenter and voted for a 50bps hike. However, the FOMC statement noted that ongoing increases are appropriate.  It expects to begin reducing the size of the balance sheet at “an upcoming meeting’.  Fed Chairman Powell said at the press conference that the FOMC has a plan to raise rates steadily over the course of the year and run off the balance sheet. This is hawkish!

The FOMC also noted that inflation remains higher than targeted due to elevated prices and supply chain issues.  Powell said that the Russia/Ukraine war added to inflation by raising energy costs. He added that inflation will take longer to return to normal than initial expected and that risks are to upside.  Powell also said that the committee expects inflation to remain high until middle of next year, turn lower, then turn sharply lower.  As a result, the FOMC increased the median forecast for inflation substantially from December.  They now see inflation at year end near 4.3%, as opposed to 2.8% previously!  The committee also cut its forecast on growth for 2022 to 2.8% from 4.0% in December.  Despite the higher inflation and lower growth forecasts, Powell said he does not see a recession over the next year.

The median forecast for rates shows 1.9% at the end of 2022 and 2.8% at the end of 2023.  This would indicate there may be as many as 7 rate hikes this year, which indeed makes this hawkish.  Note that these are median expectations, meaning some saw inflation even higher at year end! On a daily timeframe, EUR/USD had been moving lower in an orderly channel.  During the month of February, price broke out of the top side of the channel and failed, only to move lower and test the bottom of the channel.  However, price was halted at the 161.8% Fibonacci extension from the low of January 28th to the highs of February 10th, near 1.0920.  Expectations are that the trend will continue, however there is room within the channel to move higher first.  Resistance is at the highs of March 10th near 1.1121 (also previous lows), then the top, downward sloping channel line near 1.1210.  Support is at the bottom trendline of the channel near 1.0890, then the lows of March 7th at 1.0806. 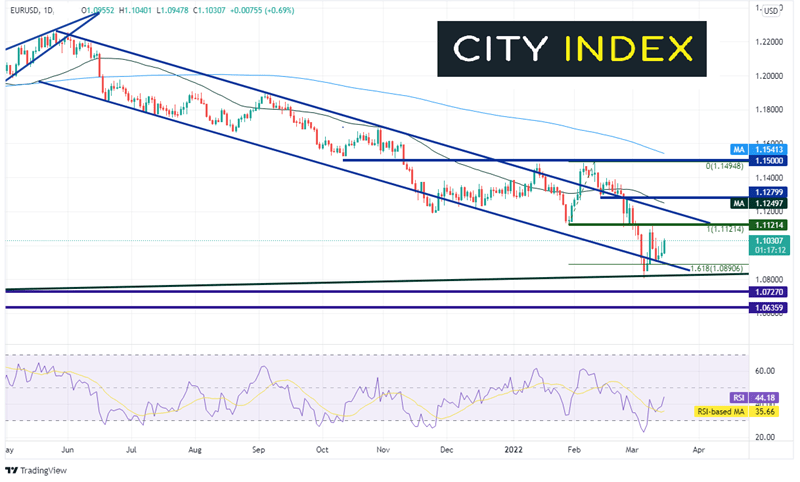 The Fed is concerned about inflation, as it now expects 4.3% by the end of the year.  As a result, the dot plot shows roughly 7 rate hikes baked in for this year, in addition to unwinding of its balance sheet.  This could be viewed as a hawkish meeting. Watch the inflation data moving forward to see if the FOMC will feel it’s necessary to hike by 50 bps at one of the upcoming meetings!