Growth Stocks Clobbered: A Changing of the Guard to Value?

Growth Stocks Clobbered: A Changing of the Guard to Value?

Since at least 1934, Ben Graham published his seminal book Security Analysis, value investing has been arguably the single most successful strategy. After all, who could argue with buying companies that are cheap relative to underlying fundamentals like earnings, sales, and dividends?

Well, after a decade’s worth of underperformance, even the most diehard value investor is asking whether the strategy is obsolete in an era of relentlessly growing technology platform companies like Facebook, Apple, Amazon, Netflix, and Google.

While it’s a bit beyond our typical traders’ timeframe, we would note that similar periods of extended value underperformance have eventually led to dramatic reversals back in favor of cheap stocks. After trailing the S&P 500 in the peak of the tech boom from 1996 to 1999 (to say nothing about the more dramatic moves in the high-flying Nasdaq), Warren Buffett’s value-focused Berkshire Hathaway went on to outperform the index by nearly 25% per year from 2000-2002!

This week’s price action suggests that we may be nearing a similar “changing of the guard” back toward value stocks. With more than $85B in combined assets, the Russell 1000 Growth and Value ETFs (IWF and IWD, respectively) represent a massive allocation to the opposing investment strategies. As the IWF/IWD ratio chart below shows, growth has been dramatically outperforming value over the last three years: 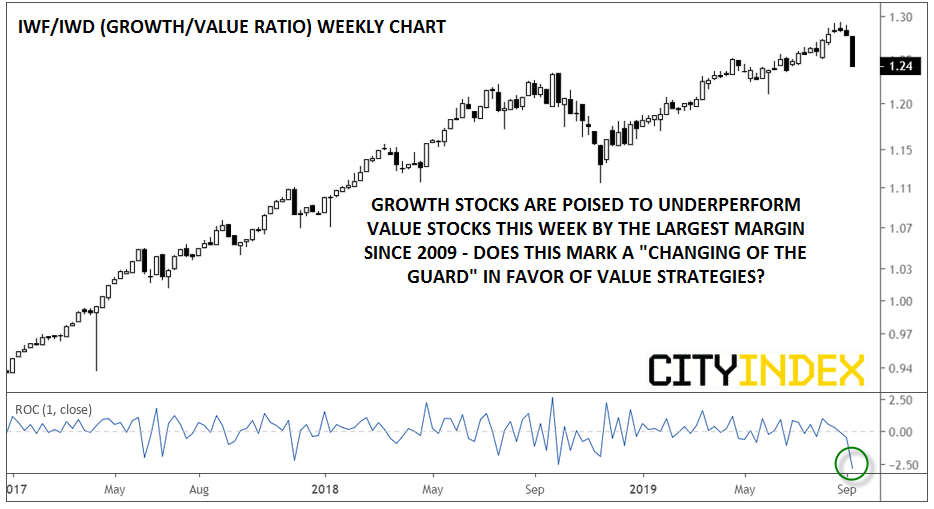 While the trend in this chart is clearly higher, we wanted to highlight this week’s big drop in the ratio. As of writing, growth stocks (IWF) have underperformed value stocks (IWD) by 2.8% this week alone. If it holds through the rest of the trading day, this would mark the biggest shift in favor of value stocks since the Great Financial Crisis in 2009!

Of course, we’ve similar one-week “growth panics” do little to deter the long-term trend in favor of growth, but at a minimum, this week’s drop should serve as a reminder that growth doesn’t always outperform value, and could lead to more two-way trade moving forward.

For an alternative (or at least more balanced) view, see my colleague Ken Odeluga’s article “Nasdaq bounce shoves aside value ‘comeback’” from earlier this week!

Ant Group IPO: Everything you need to know about Ant Group
By:
Rebecca Cattlin